If You Win, You Lose: The Philosopher’s Political Dilemma | Classical Wisdom Weekly 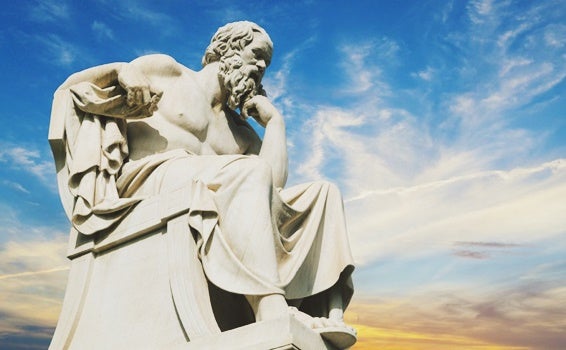 If You Win, You Lose: The Philosopher’s Political Dilemma

The philosopher in Plato’s Laws, called the Athenian stranger, converses with old men settled in their habits and attached to the regimes in which they live. Kleinias and Megillus are exemplars of pious traditionalism. Moreover, they propose to travel to its very source–the cave in which the god delivered the laws of Crete. Two topics one never discusses must be confronted: politics and religion.

Such challenges are usually not well received and can result in ingesting harmful substances.

Because of the subtlety required in questioning the firmly-held beliefs of his interlocutors, we can expect the Athenian to frame his speech very carefully.

The travelers will rest from time to time in the shade of trees, for the bright light of inquiry constantly peering into the dark places of convention and accepted belief can be overwhelming. They must also be encouraged to continue their wearisome journey; the Athenian rallies them to the cause and keeps them moving forward.

He begins with an inquiry into the incompleteness of the Dorian regimes, which were ordered exclusively to martial virtue. He attempts to guide his interlocutors to the understanding that  laws should aim at the whole of virtue. This process involves delicate questioning and the use of various images to lead them beyond strict conformance to the conventions of their own regimes.

That the actual practice of politics is at stake is made clear when Kleinias reveals that he is about to engage in the task of founding a city.

The Athenian then takes them through the creation of a city in speech, which emphasizes the massive difficulties involved in founding and maintaining a virtuous city and thus makes clear the necessity of philosophical wisdom.

The philosopher educates men who will have political power, but shows a reluctance to become involved politically himself. The Athenian evades one attempt to involve him in the new colony by suggesting that it is not his responsibility (Book VI).

But when the travelers reach the end of their journey, Kleinias and Megillus decide that the city they have been discussing simply cannot be founded without the presence of the Athenian:

Dear Kleinias, from all that has now been said by us, either the city’s founding must be abandoned, or this stranger here must not be allowed to go, and by entreaties and every contrivance he must be made to share in the city’s founding.

What you say is very true, Megillus, and I will do just these things, and you must help.

They have now reached the cave and will compel the Athenian to go in. Like the famous image in the Republic, this cave represents the realm of convention and obfuscation from which the philosopher has already escaped.

By now, Kleinias and Megillus have glimpsed the true nature of law and recognized extra-political standards of judgment. In fact, they have grasped the importance of philosophical understanding so well that they press the Athenian to get used to the dark.

The Athenian does not answer them. Apparently, he does not wish to go in. His silence is an indication that, while the philosopher’s wisdom is necessary to guide the city, he does not himself wish to engage in politics. His quest for wisdom requires that he maintain the freedom to pursue his inquiries without directly engaging in political rule.

The suggestion of compulsion in the remarks of Kleinias and Megillus indicates they are aware of the Athenian’s reluctance, though it can be doubted whether they understand it. They have grasped the importance of philosophy, but they have not grasped philosophy itself or come to appreciate its need for independence. They are concerned with the health of their city; thus, they remain willing and able to use compulsion, the means available to political men, to force wisdom to meet the practical needs of politics.

This outcome raises the question of how well the philosopher knows how to escape the snares of pious traditionalism. He knows well how keep political men talking, convincing them that philosophy is not useless to political life. But he does so by descending to the particulars of founding a city that will inevitably require a pious traditionalism of its own.

The philosopher seems to be caught in a dilemma: If he wins, he loses. The very nature of his investigations necessarily puts him in contact with purely political men. If he wins them over, they will force him to participate in practical politics. He will not have convinced them of the desirability of philosophical wisdom as such, but only of its usefulness, and in so doing will have destroyed the freedom necessary for pursuing the very wisdom he has employed.