Epictetus was a Stoic philosopher that lived from 55-135 CE. He came before Marcus Aurelius and after Seneca. Epictetus was a slave for much of his youth and began studying philosophy under Musonius Rufus during his enslavement.

He gained his freedom sometime after the death of Emperor Nero and began to teach philosophy in Rome. He founded his own school of philosophy in Greece after Emperor Domitian banished all philosophers from Rome in 93 CE.
Though missing several parts, Discourses is Epictetus’ largest surviving text. It is said to have been originally comprised of eight parts, four of which we have today. 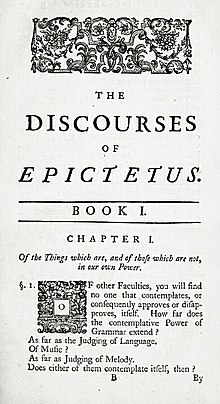 Keeping with Stoic tradition, Epictetus’ philosophy is practical and actionable, as opposed to mere theoretical inquiry. Eudaimonia (happiness or flourishing) is the primary goal of philosophical pursuits, according to Epictetus. Apatheia (freedom from passion) and ataraxia (imperturbability) are central to one’s journey toward eudaimonia.
Epictetus teaches that much of human unhappiness or discontentedness occurs through false beliefs about what is good or evil, and through hasty judgments of one’s circumstance. For Epictetus, the good is only what is virtuous, and evil is vice in action or thought.
For the Stoics, virtue is synonymous with arete or excellence. To cultivate excellence as a human being one must understand and live in accordance with one’s nature. It is also necessary, in the pursuit of eudaimonia, to properly condition and maintain one’s prohairesis (moral character).
In addition to the categories of good and evil, Epictetus discusses “indifferent things” as a third category. Those things which are indifferent are simply preferred or dispreferred, and neither good nor evil. 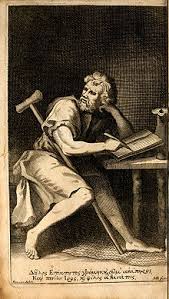 Some examples of things that fall under the preferred-indifference category, according to Epictetus, would be money and health. I’m not sure about you, but I happen to believe that a modest amount of money and health is a truly good thing, and not a matter of indifference.
Dispreferred-indifferences would include sickness and poverty. Again, these things seem bad to me, rather than a matter of indifference. Perhaps I am not as Stoic as I might be…
For Epictetus, indifferences are not necessary in order to attain eudaimonia, rather the way in which one obtains or makes use of these indifferences is what is important.
For instance, if someone pursued wealth as a preferred-indifference, and in their pursuit they had to lie, they would be harming their moral character. In this situation, for Epictetus, it would be better if one were poor but honest, rather than wealthy and dishonest.
As I already mentioned above, philosophy is more than theoretical reflection for the Stoics. Epictetus gives us not only ideas and concepts as to how one might live the good life, but he also describes three categories of activity to help us put those concepts into action. 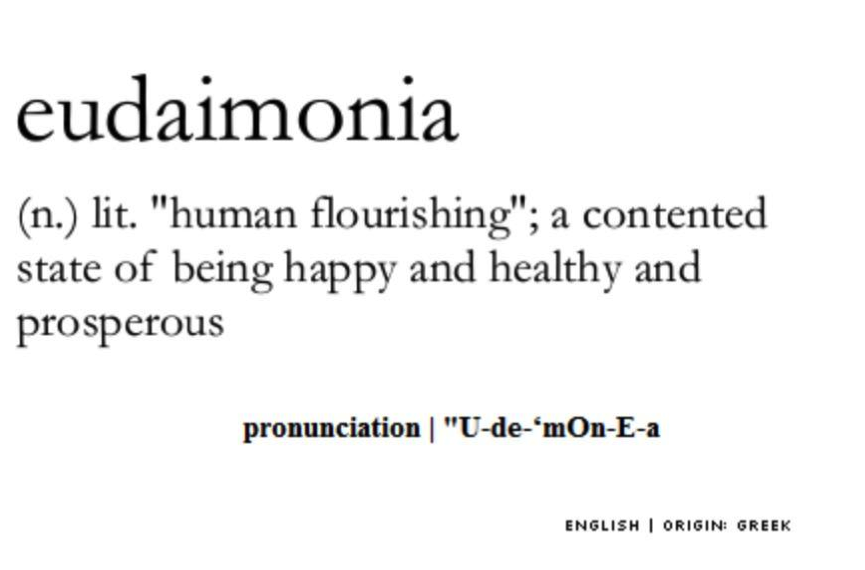 The three categories of activity include:
This activity consists of knowing what is truly good and virtuous, and desiring only those things. If we have desires beyond what is good or virtuous, we will be led into feelings of anxiety and experience misfortunes and sorrow as a result. It’s better to want LESS than have MORE.
In cultivating this activity, we begin to see that the consequences of our actions are never entirely within our control, but our pursuit of certain values are within our control.
If we choose to act in accordance with a value system that is in harmony with our pursuit of eudaimonia and moral excellence, we are more likely to attain eudaimonia than if we simply chose a desired outcome and made attempts to manifest that outcome through any means necessary. Therefore, we must be less concerned with the outcome, and more concerned with quality of action. Ie, Exercise for the discipline and health rather than the beach bod.
This is an activity of proper judgment. To give assent to something is to approve of or agree with it. One mustn’t judge hastily, rather one should examine the situation, become aware of what is occurring, and judge only after some reflection.
An example straight from Epictetus says that just because someone is insulting you, doesn’t mean it is an outrage in itself, but the thought that it is an outrage makes it so. If one viewed an insult as unimportant, it wouldn’t make them angry. Herein lies our power to judge and experience a seemingly-negative situation in a positive or indifferent manner.
Basically, offense is in the ear of the hearer. It was a popular mantra for some in the schoolyard (for some of us at least!)… Sticks and stones may break my bones but words will never hurt me.
If one is to flourish and live a happy life, one must know what is within their power and what is not. According to Epictetus, we cannot control external events, or the behavior of another person, and so we mustn’t worry about such things; doing so will only cause us anxiety, anger, and frustration. We are in control of our own thoughts, opinions, and actions, and so we must focus on these instead. 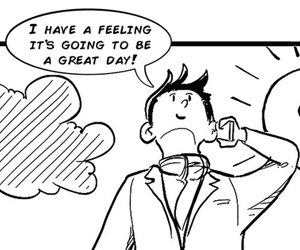 Focusing on his thoughts, instead of the external world.

One can see the influence that youth enslavement undoubtedly had on the philosophy of Epictetus. To simply accept external circumstances and turn our attention inward sounds like an effective way of life for someone stuck in a situation from which they cannot escape.
There are many things of which we have no control over and must accept, such as the life we were born into and our genetic predispositions… but this doesn’t mean we have to accept or become indifferent to the behavior of a person that is acting in a malicious way, and I think it is dangerous to believe that we have no control over external events.
After all, it is human beings that shape those external events. By turning inward and being dispassionate toward the rest of the world, we passively give assent to unprovoked behavior and harmful situations.
Anger, frustration, and other seemingly negative emotions play a vital role in our lives, and being inspired through these negative emotions is, in my opinion, an integral part of being human.
When framed in this light, the philosophy of Epictetus begins to seem like a mode of being that asks us to live against our nature, rather than living in accordance with it.
As with anything, though, we mustn’t view the philosophy of Epictetus as an all-or-none sort of situation. Perhaps we should take what is useful and integrate that with other ideas, concepts, and doctrines that we also find useful. In so doing we get to truly live in accordance with our nature.
Facebook