How to Eat Like a Stoic: The Ancient Diets of Cynicism and Stoicism

The ancient Cynic and Stoic philosophers were very interested in food. (At the end of this article you’ll even find a modern recipe for Stoic soup.)

They talk both about what we should eat and how we should eat it, if we want to live wisely and gain strength of character. For instance, we’re told of the Stoic teacher Musonius Rufus:

He often talked in a very forceful manner about food, on the grounds that food was not an insignificant topic and that what one eats has significant consequences. In particular, he thought that mastering one’s appetites for food and drink was the beginning of and basis for self-control.

Musonius taught that Stoics should prefer inexpensive foods that are easy to obtain and most nourishing and healthy for a human being to eat. It might seem like common sense to “eat healthy” but the Stoics also thought we potentially waste far too much time shopping for and preparing fancy meals when simple nutritious meals can often be easily prepared from a few readily-available ingredients.

Musonius advises eating plants and grains rather than slaughtered animals. He recommends fruits and vegetables that do not require much cooking, as well as cheese, milk, and honeycombs. The Stoic weren’t strictly vegetarian — unlike their philosophical cousins the Pythagoreans. Some Stoics were probably vegetarian and others not, although they wouldn’t have eaten very much meat in general. 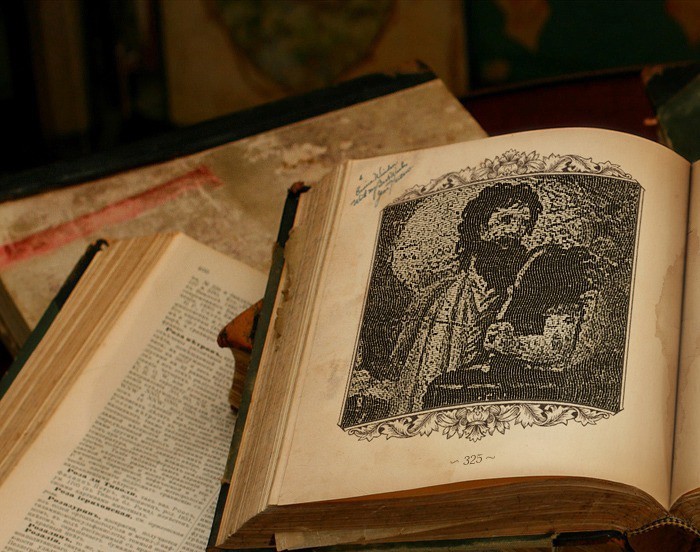 The Early Stoic and Cynic Diet

Zeno of Citium, the founder of the Stoic school, had for many years been a Cynic philosopher. “Zeno”, we’re told, “thought it best to avoid gourmet food, and he was adamant about this.” He believed that once we get used to eating fancy meals we spoil our appetites and start to crave things that are expensive or difficult to obtain, losing the ability to properly enjoy simple, natural food and drink.

We know more about the Cynic diet because it was simpler and more austere. The Cynics were known, typically, for drinking water (instead of wine), and eating barley-bread and lentil soup or lupin beans — all very cheap ingredients. One Cynic letter says: “It is not only bread and water, and a bed of straw, and a rough cloak, that teach temperance…” We’re told of Crates, the Cynic teacher of Zeno, who abandoned his fortune:

Having adopted simpler ways, he was contented with a rough cloak, and barley-bread, and vegetables, without ever yearning for his former way of life or being unhappy with his present one.

The Stoics were generally more urbane and less extreme than their Cynic predecessors, and their diet seems to have been a bit less restricted. However, right down until the time of the last famous Stoic of antiquity, the Roman emperor Marcus Aurelius, we hear about some Stoics modelling themselves on the Cynic lifestyle, which in turn appears to have been influenced by aspects of the notorious Spartan agoge or training.

For example, in a letter to Marcus Aurelius, we find his rhetoric tutor and family friend, Marcus Cornelius Fronto, joking about how he saw one of the emperor’s little sons clutching a chunk of brown bread, “quite in keeping with a philosopher’s son.” In another letter, we get a glimpse of Marcus’ eating habits:

Then we went to luncheon. What do you think I ate? A wee bit of bread, though I saw others devouring beans, onions, and herrings full of roe. 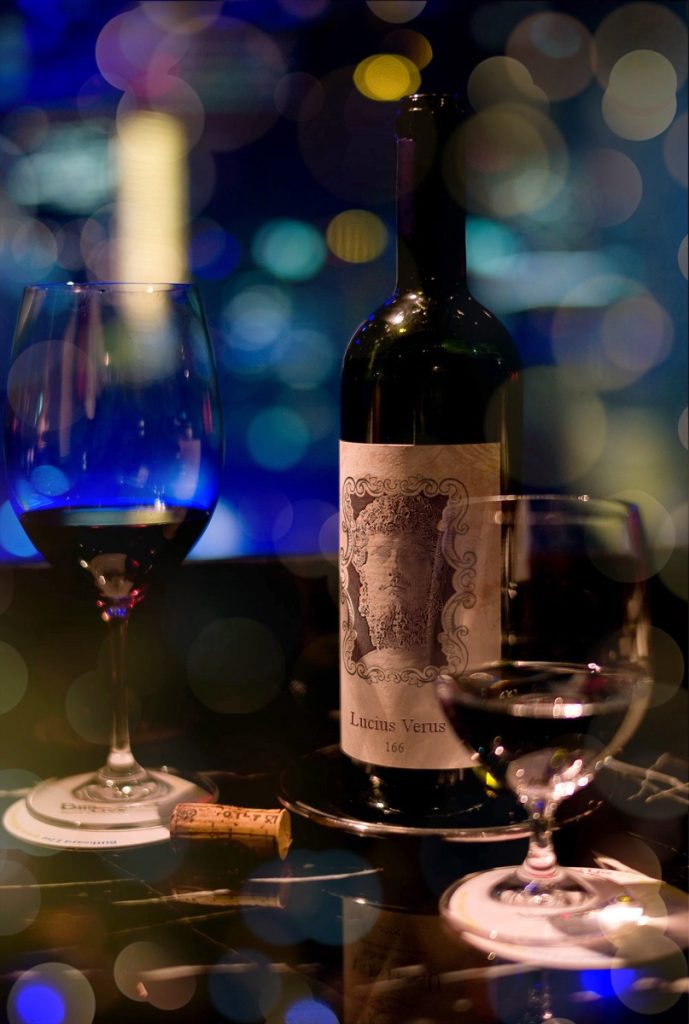 Eating with Attention and Moderation

Musonius also thought we should train ourselves to avoid gluttony:

Since this behavior [gluttony] is very shameful, the opposite behavior — eating in an orderly and moderate way, and thereby demonstrating self-control — would be very good. Doing this, though, is not easy; it demands much care and training.

Stoics should eat slowly and with mindfulness of their own character and actions, paying attention (prosoche) to their thoughts and actions. They should use reason to judge where the boundary of what’s healthy lies and exercise moderation wisely.

That very simply means making an effort to eat healthy food. However, for Stoics the main reason for doing this isn’t just to improve our health, paradoxically, it’s to strengthen our character by exercising self-awareness and the virtue of self-discipline. That’s important today because we’re bombarded with contradictory advice about the healthiest way to eat. The Stoics would say that we shouldn’t allow that to confuse us. We should make a reasonable decision and stick to it in order to develop self-control because that’s fundamentally more important than losing weight or becoming physically healthy anyway. To be clear, both goals are of value, but for Stoics the primary goal is strength of character and physical health, while “preferred” as they phrase it, is of secondary importance.

Therefore, the goal of our eating should be staying alive rather than having pleasure — at least if we wish to follow the sound advice of Socrates, who said that many men live to eat, but that he ate to live. No right-thinking person will want to follow the masses and live to eat, as they do, in constant pursuit of gastronomic pleasures.

Many people who follow Stoicism today also employ intermittent fasting. It’s likely that some ancient Stoics did too, I think. Socrates famously said that “hunger is the best relish”, alluding to the irony that we actually enjoy our food more when we’re hungry, and spoil our appetites when we over-indulge. I fast at least once a week, sometimes eating and fasting on alternate days. For lunch I tend to eat dakos, a simple Cretan salad made from barley-bread rusks, perhaps like the ancient Spartans and Cynics used to eat, and a few common ingredients like chopped tomatoes, olives, and feta.

I think Musonius, and the other Stoics, would also approve of the recipe below because it’s very cheap, mainly uses common vegetable ingredients, which are easy to obtain, and it’s also very easy to prepare. You can easily make a large batch and store it in portions to reheat later. It’s unfussy but tasty and nutritious.

In Meals and Recipes from Ancient Greece, Eugenia Ricotti describes the following recipe called “Zeno’s Lentil Soup”. It’s a modern recipe loosely based upon ancient sources, including remarks attributed to Zeno of Citium, the founder of Stoic philosophy, which are found in the Deipnosophistae (or “Dinner Experts”) of Athenaeus of Naucratis.

She says to rinse the lentils and put them in a pot with the broth to boil. Then reduce heat and simmer for one hour. Then skim the top, add the vegetables, and leave to simmer until cooked, which should be about 30 minutes. She says that if it seems too watery either add cornstarch or pass some of the lentils through a sieve. Finally, add vinegar and honey for flavour.

After pouring into serving bowls, add a good amount of olive oil — she suggests about 2 tablespoons per serving. Finish by sprinkling on the coriander seeds and adding more salt and pepper to taste.

I’ve made this recipe quite a few times myself. I use dried green lentils, which I soak overnight and boil for a few minutes. I use red wine vinegar and often add a couple of garlic cloves and perhaps a few bay leaves, possibly also a little paprika. I’d also usually garnish it with a few fresh coriander leaves and serve with bread. This is a photo of my version… 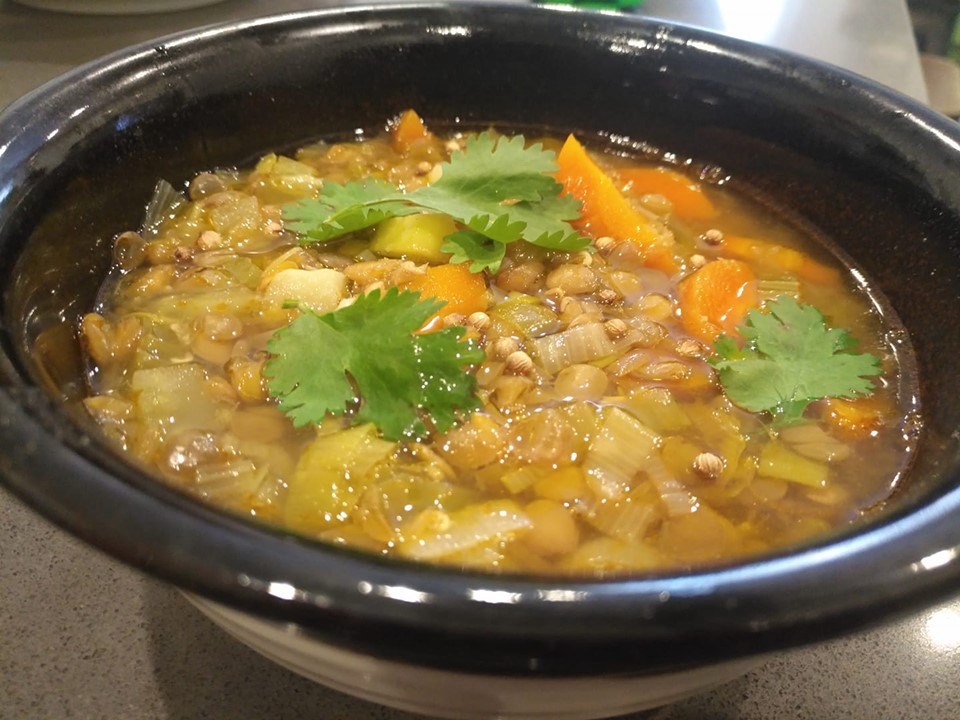