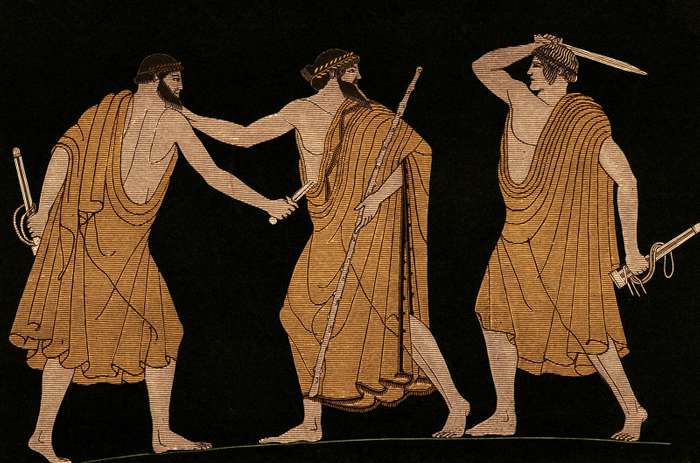 Written by Alex Barrientos, Senior Editor, Classical Wisdom
In Sophocles’ Antigone there are several different struggles taking place concerning different aspects of social, ethical, and political thought. The role of the citizen, the role of the leader, the right to rule, piety, disobedience, and other issues are discussed throughout the play.
Indebted as we are to the Greeks for the foundations of our political institutions and political thought, it is no wonder that one should discover parallels between the tensions within the play and those that persist in our society today.
One such tension, and one of the major themes of Antigone, is the struggle between authoritarianism and democracy.  One of the most salient moments of the play regarding this struggle takes place between Creon, the newly appointed king of Thebes, and his son, Haemon.
The dialogue begins with Haemon, Creon’s only surviving son and Antigone’s betrothed, entering the palace shortly after Antigone is condemned to death and taken away. Creon questions whether Haemon will be angry with him or love his father regardless, asking,

And have you now come here
angry at your father? Or are you loyal to me,
on my side no matter what I do?

Antigone in front of the dead Polynices by Nikiforos Lytras (1865)

In response, Haemon expresses his devotion to his father. Creon, delighted, tells Haemon just how important it is to have an obedient son.

Indeed, my son,
that’s how your heart should always be resolved,
to stand behind your father’s judgment
on every issue.

According to him, to be obedient means remaining loyal and standing behind someone no matter what they do. And this is the case for son and citizen alike.

If I foster any lack of full respect
in my own family, I surely do the same
with those who are not linked to me by blood.
The man who acts well with his household
can make manifest justice in the state.

But anyone who’s proud
and violates our laws or thinks he’ll tell
our leaders what to do, a man like that
wins no praise from me. No. We must obey
whatever man the city puts in charge,
no matter what the issue—great or small,
just or unjust. For there’s no greater evil
than disobedience. That destroys
whole cities, turns households into ruins,
and in war makes soldiers break and run away.
When men succeed, what keeps their lives secure
in almost every case is their obedience.
That’s why they must support those in control…

In other words, not only “my country right, right or wrong!” but, “my leader, right or wrong!” For Creon, blind obedience to the ruler is the most estimable trait of the good citizen, just as blind obedience to the father is the most estimable trait of a good son. Indeed, authoritarians and tyrants rely on the blind obedience of their followers to rise to power and maintain it.
In response to Creon’s authoritarian rhetoric, Haemon explains that people fear speaking openly to Creon, and that many secretly agree with Antigone’s actions.

Your gaze makes citizens afraid—they can’t
say anything you would not like to hear.

Antigone and the body of Polynices (Project Gutenberg)

Haemon, unlike his father, thinks it is important for a good leader to have an open mind and listen to good counsel.

A man who thinks that only he is wise,
that he can speak and think like no one else,
when such men are exposed, then all can see
their emptiness inside. For any man,
even if he’s wise, there’s nothing shameful
in learning many things, staying flexible.

Obedience does not hold the same value for Haemon that it does for Creon. Haemon recognizes that no one person can have all the wisdom in the world, and that anyone who thinks or says that they are the wisest and knows best what should be done, are fooling themselves and others, for truly such confidence is the mask of emptiness. One who is actually wise will recognize that there are limits to his or her knowledge, and accept that sometimes they may be wrong and be willing to adjust their views accordingly.

For if I, as a younger man, may state
my views, I’d say it would be for the best
if men by nature understood all things—
if not, and that is usually the case,
when men speak well, it is good to learn from them.

Too often the Creons of the world conflate criticism with disobedience, mistaking the two as being one and the same thing. Yet, we would do well to realize that criticism is not equivalent to disobedience—that criticism can be made out of respect or even love for one’s parent, one’s leader, or one’s country. Indeed, it is from the very love and obedience to his father that Haemon sees it as necessary to criticize him, just as it is from the very love of one’s country that can lead a good citizen to criticize it when they think the leader or the government is acting wrongly or unjustly.
Not only is it a mistake to conflate criticism with disobedience, but it is also important for a leader to be able to take criticism. Haemon thinks that this ability to take criticism, to take counsel, to listen to the views of others, is a good trait for a leader to have, and that harm is more likely to come from a blindly obedient citizenry than from criticism.

You notice how in winter floods the trees
which bend before the storm preserve their twigs.
The ones who stand against it are destroyed,
root and branch. In the same way, those sailors
who keep their sails stretched tight, never easing off,
make their ship capsize—and from that point on
sail with their rowing benches all submerged.

In other words, someone who does not allow criticism, or who does not know how to adjust their views when rightly criticized, will be the cause of their own undoing, just as the tree which does not bend before the storm is ripped from the ground it so confidently stood on. Indeed, as Aristotle puts it in his Politics, “Tyrannies have generally all been quite short-lived” (Book V.12).

The debate that Creon has with Haemon is, in a very real sense, the debate that continues in free and open societies today. What is the role of criticism, disobedience, and dissent? To what extent are these things necessary for a healthy democracy or republic? Are there certain public officials who are beyond or above criticism? What does it mean to be patriotic?
Creon, the archetype of the authoritarian, rejects anything besides blind obedience to his rule as being a danger to the state. Haemon, the archetype of the lover of liberty, thinks that it is a sign of strength in leaders and the state alike to allow criticism, and that obedience is not a virtue in and of itself.
Were authoritarians to adopt a motto, they could not choose a better one than the line from Creon, that “There is no greater wrong than disobedience.”
Yet, those of us who favor living in a free and open society might want to consider the words of Haemon, and join him in acknowledging man’s corrigibility, and the idea that openness to criticism is a sign of wise leadership and a healthy state.
Facebook