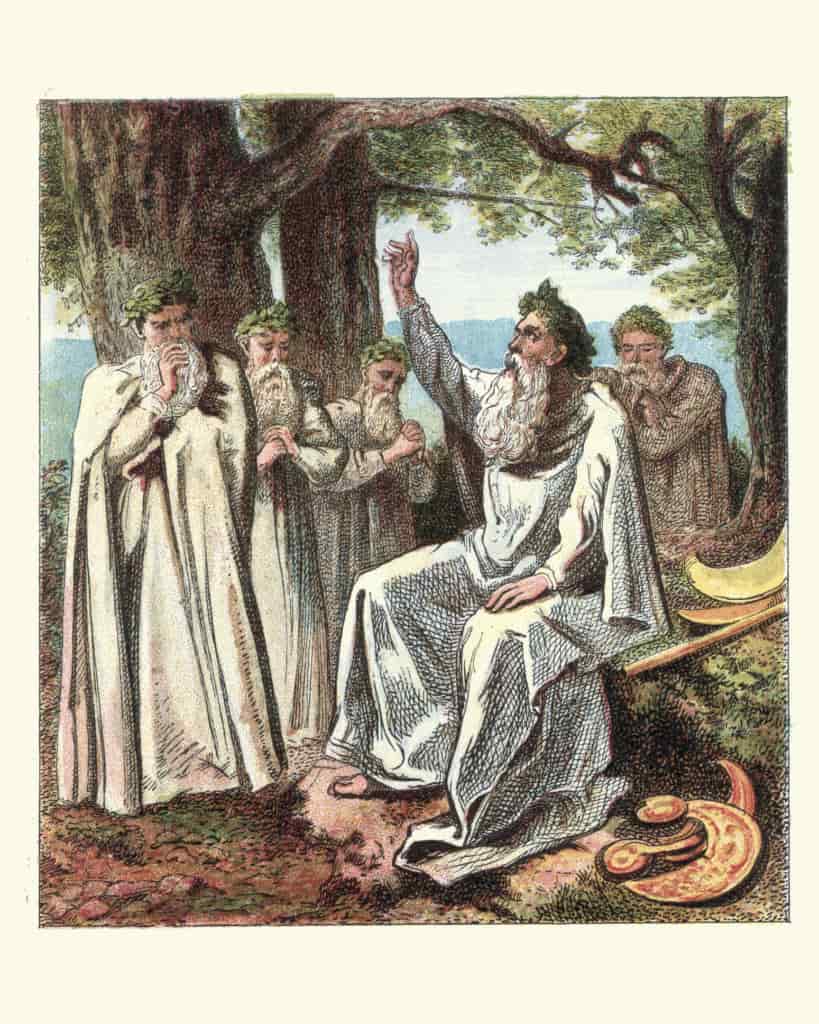 By Edward Whelan, Contributing Writer, Classical Wisdom
The Druids were one of the most important groups in Celtic society, which dominated much of Europe before the rise of the Roman Empire. The druids were the Celts learned class and they were magicians, healers, philosophers, poets and lawyers. They were central to Celtic life and were central to the Celts resistance to Roman expansion.
The Celts and the Druids
The druids were mainly priestly and were a distinct caste in Celtic society. They were members of the elite and they were the priests of the Celtic people. They had esoteric knowledge and practiced rituals that allowed people to communicate with the Gods.

19th century reimagining of a Druid

Druidism can be likened to a shamanistic or natural religion. The Celtic priests taught that the natural world was a channel to the world of the spirits and the realms of the Gods. The Celts practiced a polytheistic religion that worshipped many gods and goddesses. They held that many natural phenomena such as trees and springs held magical powers. Druids, it was believed, could harness these powers by special rites.
Ancient Greek writers have left accounts of Druids performing ceremonies such as cutting mistletoe off sacred oak trees on nights with full moons. They would then make potions, something the Celtic learned class had a profound knowledge of (along with herbs), that would help women and men to be more fertile.
Their perceived ability to perform magic meant that the Druids had immense social and political prestige. In early Irish chronicles the Druids are recorded as having the ability to change the tide of battle, such as by healing warriors and allowing them to return to the fight. The Druids were also bards and their poetry was held to have magical qualities and it was believed that one of their satires could literally result in the death of the person being ridiculed.
Druidic Philosophy

A carving of a trinity of a Celtic goddess

The Classical writers regarded the Celts as little more than barbarians. However, even they stated that the Druids were very sophisticated and esteemed them as philosophers. The Celtic learned class believed in the transmigration of souls, that is they subscribed to the doctrine that the soul was reincarnated after death. It was believed that Druids could help the deceased to live again in a paradise-like otherworld or be reincarnated in another body. How this was done is not known.
Druid philosophy was based on the idea of eternal cycles and for this reason they revered the solstice and equinox. The Celtic priests believed that the number three was sacred and that the cosmos was divided into three parts. The also believed in Trinities of Gods. The symbol of three interconnected spirals was a very important religious symbol for the Celts and it was often inscribed onto their monuments.
Druids and Human Sacrifices
The Druids were condemned in Classical accounts of the Celts, because they practiced human sacrifices. Julius Caesar, in his work on the Gallic Wars, describes Druids sacrificing humans to the gods. In one memorable account, he describes Druids in white robes, having people placed in giant straw figures. These ‘wicker men’ were set on fire and those inside all burned to death. This was done to win the favour of the gods. There are some who claim that accounts of Druids conducting human sacrifices are merely Roman propaganda.

The organization of the Druids
The Druids were a special caste and they had certain privileges in Celtic society. The Celts adopted Greek writing and became literate. However, the Druids did not write down their beliefs or practices. All their knowledge and philosophy were passed down orally and this was done to protect their status as a special group.
It is believed that some of their lore data back to the Stone Age. Much of their learning on magic, healing, etc., was handed down by verses that were memorized. Some Druids were specialists and focused on wizardry or were traveling poets. According to Caesar there were High Druids who commanded the order of Druids. They were elected or else they won their position through battle. Interestingly many leading Druids were females’, and this is indicative of the high status of women in Celtic society.
The End of the Druids
The Romans greatly feared the Celts or Gaul’s, as they called them. This was because they had sacked Rome in the 5th century BC. During Julius Caesar’s campaign in Gaul he destroyed many Druidic shrines and sought to curtal their influence. He, like other Romans, knew that they were among the most determined to resist their rule.

Caesar receiving the surrender of the Celts

After the conquest of Gaul, the Druids were all but outlawed and many of their rites were prohibited. During the Roman invasion of Britain, the Druids were at the forefront of the opposition to the legions. It is known that they were often counsellors to local Celtic kings and rulers. The Druids staged a desperate last stand on the Welsh Island of Anglesey in the final phases of the Roman conquest of Britain.
After the legion’s conquest of Britain, the Druids were outlawed as in Gaul. They went underground, and they continued to practice many aspects of Druidism. In Ireland, the Druids continued to practice their ancient religion and remained the learned class.
However, it was the arrival of a new religion, Christianity which really led to the demise of Druidism, even in Ireland. In various saint biographies, Christian saints are shown as defeating the Druid’s magic with the power of prayer. However, the Druids remained and continued the traditions of the ancient Celts even in the Early Middle Ages, as can be seen in the figure of Merlin in the tales about King Arthur.
References
Chadwick, Nora (1989). The Druids. Cardiff: University of Wales Press. Cardiff.