Lagash and the Too Fertile Valley 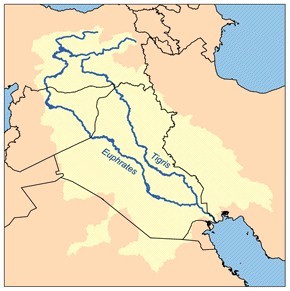 Between the Tigris and Euphrates rivers lies a land known as Mesopotamia. It was here that men found suitable terrain, which they proceeded to pierce, rip, and seed. Once these seeds took root, civilization was born.
Unlike pastoral societies that roam around looking for food, agriculturalists sought unity by teaming together, settling in one spot, and growing their food. In doing so, they created a village, a society of their own. However, it takes more than farming to create a state.
After a few generations, people slowly began to build upon their knowledge of agriculture, animal husbandry, and writing. With these new found skills, plus many more, the villages gained a greater sense of the self. Such awareness allowed for the creation of law, trade, private property, social interest, internal order and identification. This development enabled the Mesopotamian villages that dotted the landscape to evolve into a series of city-states.
The Sumerians were the first to carve out a civilization in Mesopotamia. By the third millennium BCE, the land of Sumer consisted of a dozen or more of these city-states. They were walled, but still surrounded by suburban villages and hamlets.
In addition, the city-states of Sumer were centralized. Their centrally controlled society needed an administration to conduct the day-to-day redistribution of resources and to direct all social activity.
Lagash, like other city-states of its time, shared control over resources and social activities between the palace and the temple. The temple oversaw a great amount of land and exerted a powerful influence over the inhabitants. Meanwhile, the palace authority controlled as much, if not more, land than the temple. This arrangement was fine until later on, when the palace wielded an even greater command over the people. In doing so, the king was able to amalgamate the palace with the temple, in which the king saw himself as god’s own representative on earth.
If god chooses the king, then logically the temple must obey. However, this settlement does not mean there would never be strife again between the palace and temple authorities. So long as they existed side by side, the ambition to control and hold a monopoly over the other’s institution was desirable, especially if one wishes to control the masses. The divinity of the king, therefore, placed the temple in a predicament. 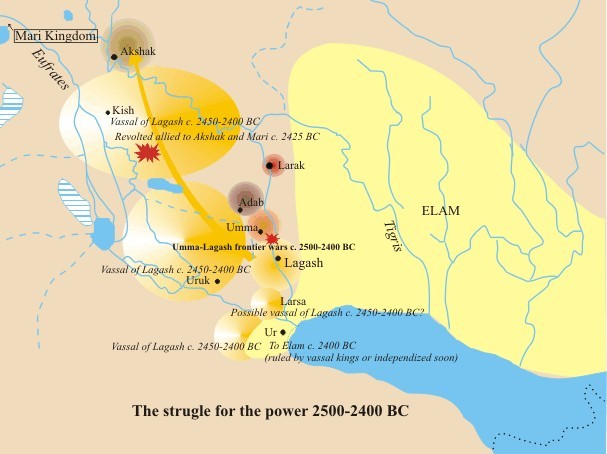 Map of the region

The power struggle in Lagash was even more enticing when one contemplates what was at stake. The city was located northwest of the junction of the Euphrates and Tigris rivers and east of the city Uruk. Lagash was a fertile area, with irrigation canals feeding its farms via the Shatt al-Gharraf channel that filtered from the famous waters.
Consequently, Lagash grew bountiful crops and its location made it a prime economic powerhouse. Its convenient waterways were instrumental for commerce. For a substantial period, commercial competition between Lagash and the other city-states was healthy. There comes a time, however, when hostility rises and the need to settle disputes requires war. 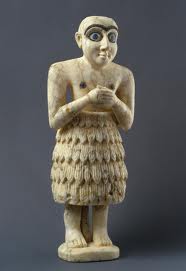 Enter Eannatum, King of Lagash (c. 2455-2425 BCE), who established the first Mesopotamian empire in history through constant warring. But how did Eannatum achieve this, how did he create the first verifiable empire in history?
Eannatum, son of King Akurgal of Lagash, ascended the throne after his father got into a bit of a squabble with his northwestern neighbors, the city-state of Umma. Eannatum’s spat with Umma would lead him on a quest for dominance in the region… which would ultimately ruin his empire.
Tune in Next Week to see how Eannatum conquers the fertile crescent and builds the first empire.
“Lagash and the Too Fertile Valley” was written By Cam Rea
Cam Rea has a BA and MA in Military History. He recently published “March of the Scythians: From Sargon II to the Fall of Nineveh.” In addition, he is an ancient history junky and a Teaching Assistant at the Ludwig von Mises Institute.
You can also grab the book on kindle HERE.