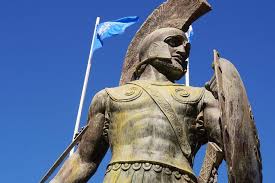 Sparta, also known by its ancient name Lacedaemon in honor of their legendary founder, is often considered to have been the most dominant military presence in ancient Greece. Their infantry soldiers were said to have been among the most skilled and fearsome warriors of the ancient world. Dedicating the majority of their lives to perfecting the art of warfare, the ferocity of the Spartan hoplite would grant the city-state several military victories and lead to the defeat of Athens during the Peloponnesian War.
This obsession with fighting was supported by their culture. The Spartan lifestyle, especially that of the Spartan men, was dedicated to learning the art of fighting and the craft of war. At birth, Spartan babies were examined for weaknesses. If they were deemed frail or deformed, they were tossed into a chasm on Mount Taygetos. At a young age the boys would be taken away from their homes and participate in an education system known as Agoge. In this state mandated training curriculum, young male citizens would be taught how to be a warrior. They were educated in the ways of warfare, fighting as well as reading and writing. They would endure physical hardships and often be submitted to harsh, violent punishments.

Statue of a Spartan

This militaristic state was only possible because of the complex societal structure of Sparta. While native born Spartans enjoyed full rights and freedoms, there were others who were not so fortunate. The Perioikoi were a secondary type of Spartan citizen who, although not full citizens and therefore unable to participate in the Agoge training, still enjoyed freedom in the Spartan community. They acted as skilled craftsmen and reserve warriors when needed.
The Helots were state owned serfs who bordered narrowly on being classified as slaves. The Helots were lower class citizens who were responsible for the agricultural stability of Sparta. It was only through the farming work of the Helots that the other Spartans were able to free up their time to participate fully in military training. Even though the Helots were essential to Spartan society, they were also prone to uprisings and would be a constant source of trouble for the Spartan city.
An interesting note about Spartan society was that women enjoyed a level of freedom that was unheard of in the ancient world. Spartan girls were fed the same food as their brothers, and they were not restricted to their homes as was common in Athens. The daughters and sisters of Sparta were allowed to play outdoors and even compete in sports. While it was common in other city-states to marry off girls at the age of 12 or 13, Spartan women tied the knot in their late teens or early twenties. This was done as an effort to spare women the health dangers of pregnancies in adolescents. As a result of their superior diet and bountiful exercise, Spartan women often lived into old age more frequently than in any other part of the ancient world.

Leonidas and the Battle of Thermopylae

The military contributions of Sparta can not be overemphasized. During the Classical age of Greece, they were unmatched as a land military force, playing decisive roles in several battles during the second Persian invasion of Greece in 480 BCE. Sparta is perhaps best remembered for it’s heroic stand at the battle of Thermopylae, where King Leonidas and his 300 Spartans (along with roughly 6000 other Greek hoplites) fended off the massive Persian army before being outflanked and eventually massacred on the third day of battle. Thermopylae remains one of the most famous last stands of military history and continues to be a topic of fascination for modern classical enthusiasts.
ATHENS

It was said in the early years of Athens, the city-state was governed by a series of kings. In mythology it is said that the hero Theseus was one of the early kings of Athens and began his reign shortly after slaying the ferocious Minotaur. Athenian politics would evolve into a early form of democracy in 550 BCE. The Athenian system of democracy was set up as a direct democratic process in which the population was able to vote directly on legislation. However, only men who had completed their military service were actually allowed to vote or participate, which would constitute about 20% of the total population. Despite restrictions such as these, Athenian democracy was remarkable y successful and well maintained. It is for this reason that Athens is often considered the birthplace of democracy.
Athens is also considered the cradle of western civilization; this is due to their progress in the fields of philosophy, literature and even architecture. Athens was the heart of ancient philosophy. It was the location of Plato’s Academy as well as Aristotle’s Lyceum. Athens was also the home of the famous Socrates as well as other influential philosophers such as Diogenes and Epicurus. Philosophy took great strides in Athens.

Whether it was Socrates’s dramatic lectures on the examined life, Plato’s abstract theory of forms, or even Diogenes wandering the streets with a lantern because he was looking for an honest man; there was always something going on. In addition to philosophical progress, Athens was home to some of the most beautiful structures of ancient times. The Acropolis and the famous temple known as The Parthenon are brilliant examples of ancient structures that exemplified the skill and precision of Athenian architecture. In addition to the temple of Athena, the Acropolis was also home to the theater of Dionysus where famous playwrights such as Sophocles and Aeschylus regularly presented some of their most notable tragedies.
While Athens is often remembered for their advances in the realm of philosophy and literature, they were by no means unable to participate in warfare. While the city-state of Sparta was known for their ability to wage war on the ground, it was the superior navy of Athens that would contribute to several key victories during the fist and second Persian invasion as well as the bloody Peloponnesian war. Perhaps the most important victory by the Athenian navy was the battle of Salamis where the Athenian commander Themistocles defeated the Persian naval fleet, turning the tides of war in the Greeks favor.

The culture of ancient Athens was almost a mirror opposite of the Spartan civilization. They found themselves content enough to enjoy life and discuss the intellectual benefits of philosophy and politics. And while the Spartans insisted on perfecting the art of war, the Athenians exerted their energy on developing a foundation for what would become known as western culture. However, that is not to say that Athenian civilization was perfect.
When compared to the treatment of their citizens, it could be argued that Athens loses out to Sparta. While Spartan women were allowed to walk the city freely and participate in sports, the sisters and daughters of Athens had severe restrictions on their rights. Athenian women were often confined to their homes and not allowed to leave without permission. The women of Athens were often segregated from much of the population and young girls were only allowed to eat certain foods.
And while Athens is remembered for their development of democracy, it was far from perfect. Only about 20% of the population was allowed to vote or participate in politics. Individuals who had property close to the walls of Athens were excluded from war legislation, because invaders would certainly destroy their property first and the owners would therefore have a conflict of interest. Another criticism of the Athenian civilization was that they had an affinity for carelessly executing people.
During the Peloponnesian war, the ten treasurers of the Delian League were accused of embezzling funds from the Athenian treasury. These men were tried and executed one after the other until only one remained. It was only after nine men had been executed that a simple accounting error was discovered and the remaining treasurer was released.
After the naval victory at Arginusae, several Athenian commanders were accused of failing to collect survivors after the battle. Six commanders were executed for failing to perform their duties. The city would later repent for the executions and attempted to make up for it. However they made up for it by executing the original men who accused the generals.

The Death of Socrates, by Jacques-Louis David, 1787

The city of Athens even went so far as to execute the famous philosopher Socrates for ‘corrupting the young and believing in strange gods’. Socrates would later willingly drink poison, even when he was prompted with a chance to escape. In The Gorgias, written by Plato years later, the trial of Socrates is compared a doctor being prosecuted by a pastry chef and judged by a jury of children.
Whoever you side with there is no doubt that both Athens and Sparta were flourishing civilizations in their own rights. It could be argued that these two city-states were two of the most dominant super powers of the ancient world. We may consider ourselves lucky that their history and rich legacy has survived thousands of years; so that we might peer through the looking glass and witness the glory of our ancestors from a time long past.
Facebook