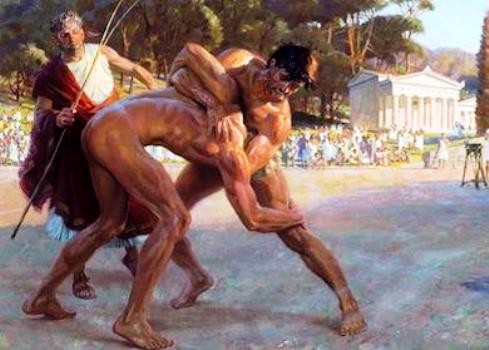 While the Spartans may not have been running laps around the Flatiron building with a kettlebell slung over their shoulder, they certainly did undergo some of the most intensive and brutal training of any civilization in ancient history.

The Spartans, for whatever reason, wrote next to nothing of their culture, or if they did it has been lost. Almost all of what we know of the Spartan society comes from outside observers. And while many ancient authors make mention of the militaristic Lacedaemonians, it is Xenophon, a pupil of the philosopher Socrates, who associated most with the Spartans and, as a consequence, wrote extensively of the Spartan culture in his essay “The Polity of the Lacedaemonians”.
“The Polity of the Lacedaemonians”, sometimes referred to as “The Constitution of Sparta”, is most certainly an examination of Spartan culture at the height of supremacy. However, one might also mistake it as being a slight against other hellenic city states, including his own home-town, Athens.
He never comes right and shakes your shoulders, screaming “this is how it ought to be done!”. However, his admiration for Spartan society is so pronounced that one might find it difficult to keep in mind that Xenophon’s own birthplace, Athens, was undoubtedly Sparta’s bitterest rival.
Then again, it is possible that Xenophon’s bias might come from the fact that the Spartans took him in and granted him land after he had been exiled from Athens for associating with the Persian Empire and his support of the recently executed Socrates.
Whatever the reason for Xenophon’s admiration, there is no denying that “The Polity of the Lacedaemonians” is one of the most detailed descriptions of Spartan life. It lists the treatment of citizens, the education of children, and the duties of a warrior. And, at least according to Xenophon, the results seem to speak for themselves.

“I recall the astonishment with which I first noted the unique position[2] of Sparta amongst the states of Hellas, the relatively sparse population,[3] and at the same time the extraordinary power and prestige of the community. I was puzzled to account for the fact. It was only when I came to consider the peculiar institutions of the Spartans that my wonderment ceased.”-Xenophon (Polity of The Lacedaemonians)

Xenophon begins his examination with the topic of child bearing in the Spartan society. It was the aim of Sparta that all children be born healthy, strong, and grow up to be warriors.

With this in mind, the Spartan women were treated with a level of equality that was unheard of in the days of ancient Greece. Rather than being confined to the household, Spartan women regularly competed in athletic competitions and trained, just as the men would, in a gymnasium. The idea behind such treatment is that in order to produce the best children, both the father and the mother must be healthy, fit, and strong.
When it came to the training of the children, Xenophon makes a point to mention that within most Greek city states it is common for individual children to be educated by a tutor, normally a slave owned by the father. For the Lacedaemonians, such a practice would be unthinkable.
Instead, the Spartan boys are taken en masse and assigned to a group of guardians and mentors known as Paidonomos, or “pastors”. The Paidonomos were selected from the most revered of the magistracies and were assigned by the Legislature of the city. They were given complete authority over the children of Sparta, often punishing them with lashings.
While we might frown on such a practice, the result, in the words of Xenophon, was that…
“…in Sparta modesty and obedience ever go hand in hand, nor is there lack of either.” -Xenophon (Polity of The Lacedaemonians)

The actual training of the Spartan youth was brutal, focusing on cultivating skills such as fighting, stealth, pain tolerance, as well as dancing, singing, and developing loyalty to the Spartan state. With the exception of the first born sons of the ruling houses, the young boys of Sparta entered into this training curriculum, known as Agoge, starting at the age of seven. They would train in the art of fighting for decades, eventually becoming reserve infantry at the age of eighteen, regular foot soldiers at the age of twenty, and eventually full Spartan citizens, with the rights to vote and hold office, at the age of thirty.
The specifics of the Agoge training are not clear. Xenophon does describe in some detail that young boys were not only allowed to fight, but were regularly encouraged to challenge each other to regular bouts.

“Necessity, moreover, is laid upon them to study a good habit of the body, coming as they do to blows with their fists for very strife’s sake whenever they meet.”-Xenophon (Polity of The Lacedaemonians)
To develop a tolerance for pain, the Spartan youth were deprived of certain luxuries. For instance, during the Agoge, Spartan boys were never given shoes. In time, their feet would grow hardy and strong. It is reported by Xenophon that a barefooted Spartan soldier could outrun and out climb any other Greek citizen clad with shoes.

Additionally, the boys were given only one garment of clothing. They were regularly subjected to extreme cold, all while only wearing a single cloak. In this way the young soldiers would gain a tolerance to the elements.
They were given minimal food, not so little that they would ever suffer from the sharp pangs of hunger, but never enough that their body would be completely satisfied. This was, again, a way to condition the boys for the pains of hunger and allow them to fight all the more ferociously on an empty stomach.
If the boys wished to find meals outside of their mess halls, it was encouraged that they should steal food. This might seem strange. While the boys were encouraged to steal, they were also severely beaten if they were ever caught in the act. Xenophon rationalizes such a practice by saying that in this way those who lack proper stealth will be punished and learn to acquire their quarry more effectively.

“So they, the Lacedaemonians, visit penalties on the boy who is detected thieving as being but a sorry bungler in the art. So to steal as many cheeses as possible [off the shrine of Orthia[17]] was a feat to be encouraged; but, at the same moment, others were enjoined to scourge the thief, which would point a moral not obscurely, that by pain endured for a brief season a man may earn the joyous reward of lasting glory.” -Xenophon (Polity of The Lacedaemonians)

And so the young Spartans were crafted and honed into some of the greatest warriors of the ancient world. They knew no other life than that of protecting the Spartan homeland and they sought no higher goal than an honorable death in service of Sparta.
It would have been unthinkable for a Spartan warrior to retreat while on the battlefield. As regular infantry, the soldiers would rather die in battle rather than face the shame of retreat in Sparta.
This tradition of bravery and ferocity in battle has recently been dramatized in popular media and has captured the imagination of modern society. For whatever reason, the ancient Spartans remain a topic of intense fascination. They lived according to a code of war. And whenever they entered battle, they knew that they would either return home carrying their shields, or else carried upon it.
Facebook