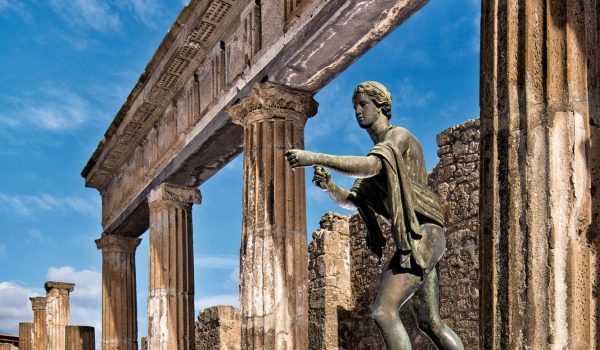 The History of Pompeii and its Volcanic Eruption

By Edward Whelan, Contributing Writer, Classical Wisdom
The Roman city of Pompeii was famously destroyed in 79 A.D by an eruption of the volcano Vesuvius, which buried it beneath feet of ash and pumice. However, while the volcano ruined Pompeii, it also, perhaps ironically, preserved it for posterity. Today the city is arguably one of the most famous archaeological sites in the world and is a UNESCO World Heritage site. 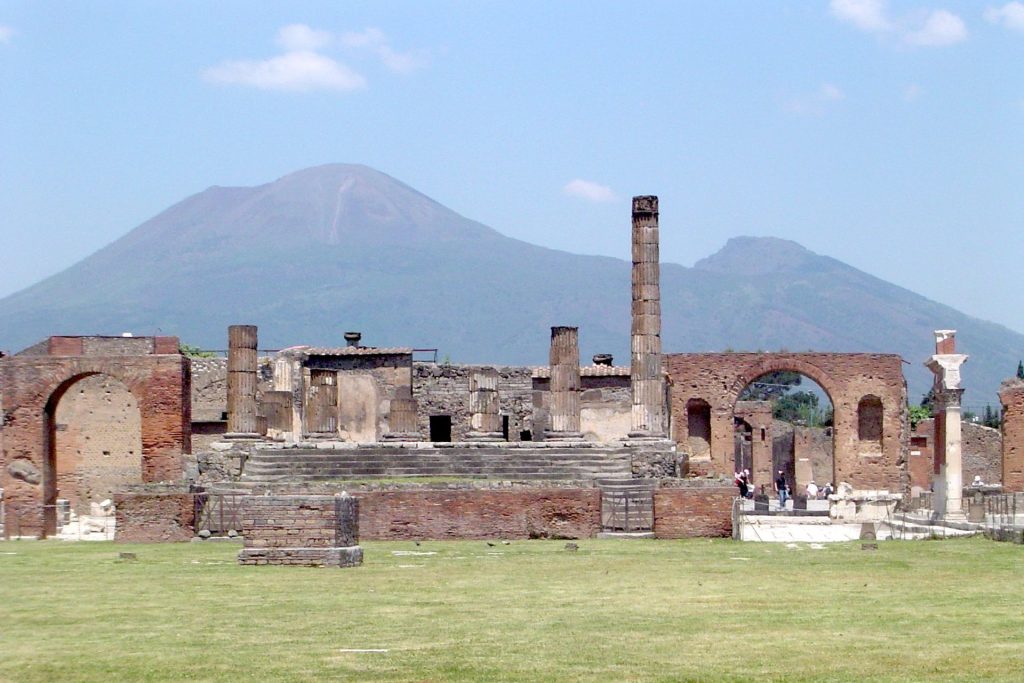 Ruins of Pompeii with Vesuvius in the distance

The early history of Pompeii
Pompeii was founded after a number of small Oscan villages were united to form the town in about the 8th century BC. It slowly grew until it came under the influence of Greek colonists and within the orbit of the Etruscan League of city-states. At this point, it was ringed by a double ring of tufa walls.
It appears that after the Greeks from Syracuse and Cumae defeated the Etruscans, Pompeii went into a period of decline. The Samnites later occupied the area and Pompeii once again flourished and become an important trading center.
After the Samnite Wars, Rome became the dominant power in the area and Pompeii became its ally (socii). It was to remain faithful to Rome even during the Second Punic War when Hannibal threatened the very existence of the Republic. In the years following the Carthaginians defeat the town prospered, due mainly to its rich agricultural land and its exports of wine. 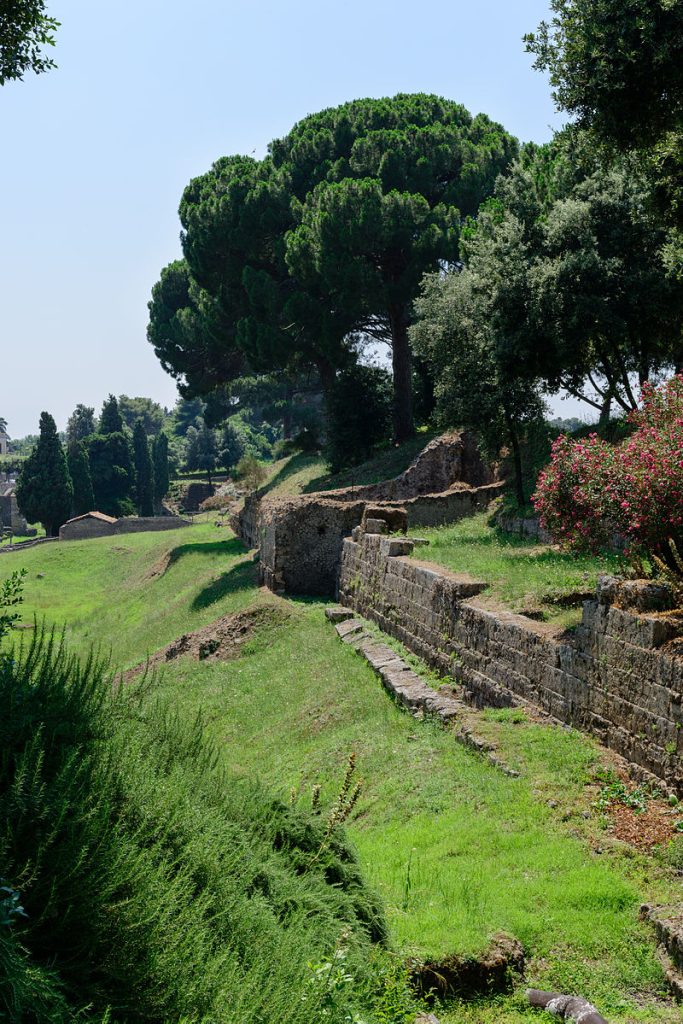 During the Social War (91-88 BC), the Pompeii revolted against Rome and joined with an alliance of Italian tribes and cities that sought Roman citizenship rights. While the Roman general Sulla besieged Pompeii, he failed to take it after fierce resistance. Eventually, however, Pompeii surrendered, following the defeat of the Italians. After the Roman victory, Sulla settled many of his veterans in the area and this eventually led to the Romanization of Pompeii. By the 1st century AD, Latin had become the language of the city and its culture was Roman. In 62 AD the city was badly damaged by an earthquake.
The Eruption of 79 AD
By 79 A.D, Pompeii was a town or small city of 15 to 20,000 inhabitants and the nearby volcano, Mount Vesuvius, had been dormant for many years. However, one day in either August or November 79 AD, the volcano erupted and send lava and hot ash down upon the city. Volcanic ash and molten rock were shot miles up into the atmosphere. A pyroclastic surge, which consisted of hot mud and molten rock, flowed down the slopes of Vesuvius. It engulfed the settlement and buried it beneath several feet of mud and rock. Many Pompeiians were suffocated by the hot ash or were trapped and buried beneath the hot mud and molten lava. A great many victims were preserved, in their death throes, by the mud that killed them and they can still be seen to this day. 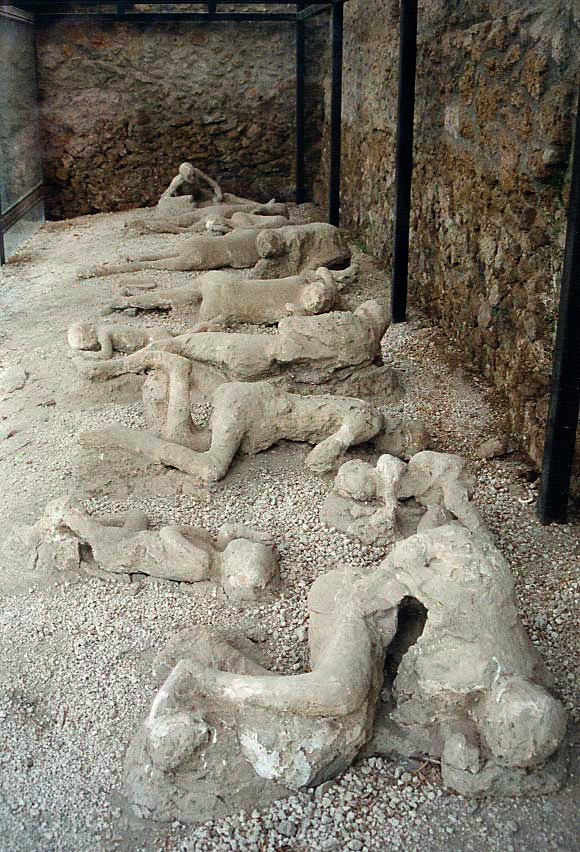 Plaster casts of the victims of the volcano

Pliny the Younger, who was an eyewitness, gives a graphic description of the terror of the people. They had the choice to stay in buildings that were collapsing or to go onto the street where red-hot pumice was falling down. Many tried to protect themselves from the volcanic debris by placing rags and pillows on their heads, but nothing could save them. Most of the buildings were destroyed but many were also buried, and largely left intact. Those who survived the eruption were evacuated by ships, but thousands never made it out. The poor, old and slaves found it hard to secure passage, unlike the wealthy.
The day after the disaster the cone of the volcano collapsed, causing a tsunami that engulfed what remained of the once flourishing city. Most of the city was buried under 9 feet (3 m) of ash and pumice. Pompeii was never rebuilt after the disaster and its name was forgotten to history.
The buried city of Pompeii 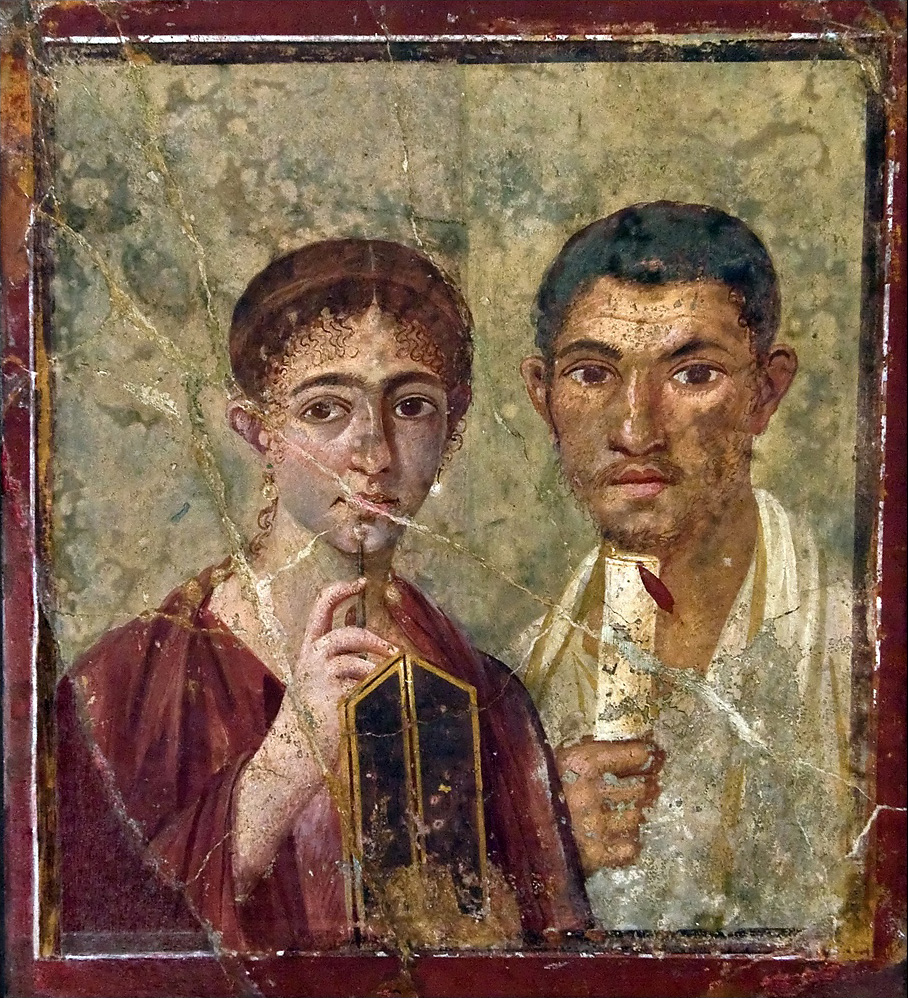 Fresco from a villa from Pompeii

The town was re-discovered in the 16th century but little thought was given to it. Only in the late 18th century was the town excavated by one of the pioneers of archaeology, the Swiss Karl Weber. Since then the site has been excavated and it is still being investigated by archaeologists. Today Pompeii is an archaeology park and it is open to visitors and is very popular with tourists from all over the world.
Insight into Roman life
There have been a large number of remarkable archaeological finds in the Roman city. A great deal of graffiti has been found and these writings have offered researchers an insight into the preoccupations of ordinary people. There have been many amazing villas discovered, such as the Villa of the Mysteries. Some of the most important finds have been made at these palatial residences; great murals have been uncovered here, masterpieces of Roman art, as well as many beautiful mosaics. Among the buildings that have been found are a launderette, brothel, and baths. Numerous artifacts and organic remains have also been unearthed, providing a great deal of information about life in Ancient Rome. 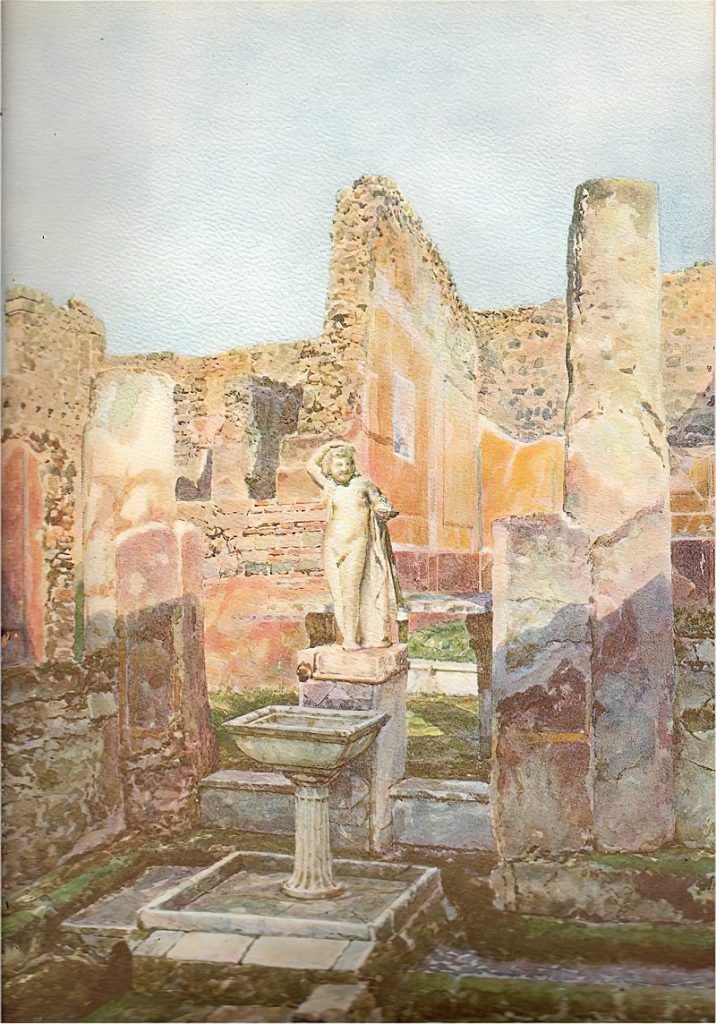 A villa unearthed in Pompeii