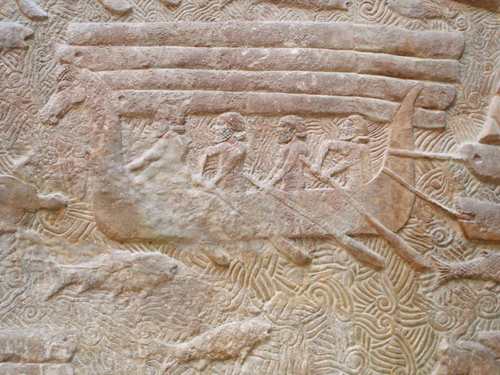 The Phoenicians: More than Just Pirates

By Edward Whelan, Contributing Writer, Classical Wisdom
The Phoenicians are among the most important people in the Ancient world. According to Homer the Phoenicians were also feared as pirates, but it’s clear they were much more than that. In fact, they decisively shaped the culture and the economy of the Levant and greatly influenced the Ancient Greeks and the Carthaginians.
The Phoenicians were a Semitic people who inhabited the coast of the Eastern Mediterranean, mainly in what is now Lebanon. It is now believed that they were related to the ancient Canaanites. They were an urban people and their major cities were Tyre, Sidon, and Byblos. They were not unified and each city had its own king or later ruling oligarchy. The cities were often rivals, but often cooperated on maritime and trading matters. The Phoenicians were great sailors and they dominated the Mediterranean with their oared galleys.
We do not know what the Phoenicians called themselves and the name that we know them as is actually a Greek name for the people. 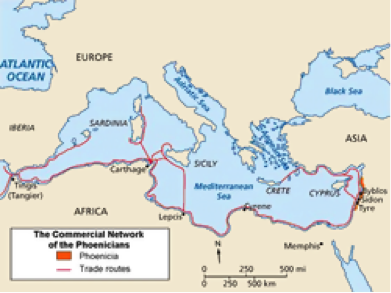 Map of Phoenicia and trade network

Phoenicia timeline
The Phoenicians emerged as a distinct people in about 1500 BC, during the Bronze Age. They soon developed large urban centers and the cities became major trading hubs. The Phoenicians occupied a narrow strip of land and they were hemmed in by larger kingdoms, so they had no choice but to become sea traders and merchants. The wealth of the cities attracted the attention of other regional powers. The Phoenicians were dominated by the Egyptians until about 1200 BC. The invasions of the Sea-peoples led to the collapse of the Egyptian Empire. This led to the economic and cultural flourishing of the Phoenicians. Based on the archaeological evidence, it seems that there was a great deal of continuity in Phoenician society and culture.
Phoenicians and the Mediterranean
The city population in Phoenicia exploded in the 9th and 8th century BC. They had already established a number of trading posts from Spain to the Levant, which they then expanded into colonies. In 814 BC, colonists from Tyre and Sidon settled in what became Carthage. 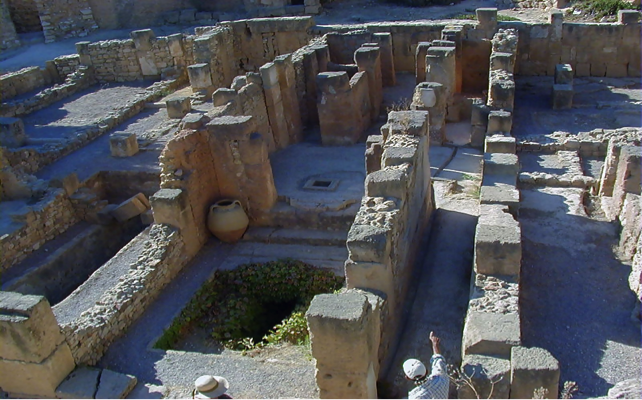 The Phoenicians were great explorers. The city-states had large fleets and they pioneered the development of the multi-tiered galley. They used their great nautical skills to discover new areas for metals and trading opportunities. In fact, a great Phoenician explorer by the name of Hannon attempted to circumnavigate the continent of Africa in the 7th century BC, and there is even some documentary evidence that the Phoenicians reached the British Isles.
Phoenician Economy

They were renowned as traders and merchants and were heavily involved in the metal trade.
Phoenicia was also known for the production of its purple dyes, which were very popular in the Ancient Mediterranean kingdoms, as well as their textile and craftsmanship. 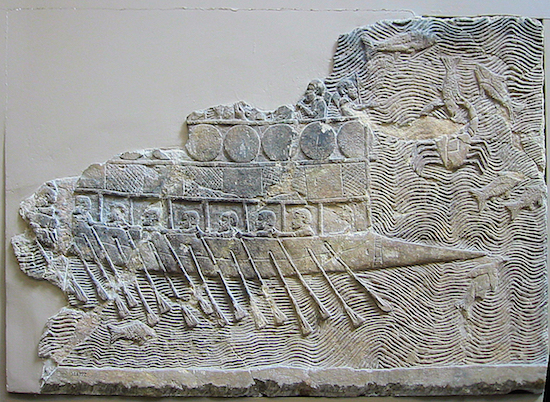 Assyrian warship (probably built by Phoenicians) with two rows of oars, relief from Nineveh, c. 700 BC.

The main natural resources of the Phoenicians were the cedar trees that grew in what is now Lebanon. In the Bible, King Solomon imported Phoenician craftsmen to help to build the Temple in Jerusalem.
Phoenician Culture
The Phoenicians were a very religious people and worshipped a pantheon of gods that were similar to the ancient Canaanite deities. The chief god of the Phoenicians was El. While it has been claimed that the Phoenicians practiced human sacrifices and there is some evidence that they sacrificed children to their gods at a Tophet, this is still controversial and is refuted by many. 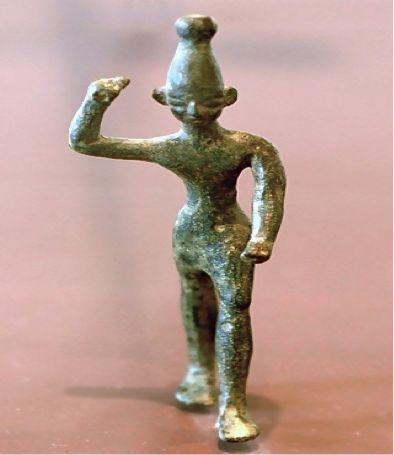 The Phoenicians were famous artists. They created new art forms by adopting the traditions and designs of the Egyptians and others and forming a new synthesis. Their artistic productions were exported all over the Mediterranean and they inspired other artists. Homer praises the arts and crafts of the Phoenicians.
The Phoenician Alphabet
Perhaps the most important cultural innovation of the Phoenicians was the development of the alphabet around 1000 BC. Adapted from previous versions, the Phoenician alphabet was based on consonants and vowels and was very flexible; it could be used to create complex communications.
The Phoenician traders spread their new alphabet throughout the Mediterranean. It was later adopted by the Greeks as they emerged from their Dark Ages. Today, the Phoenician alphabet is the basis of most of the world alphabets. 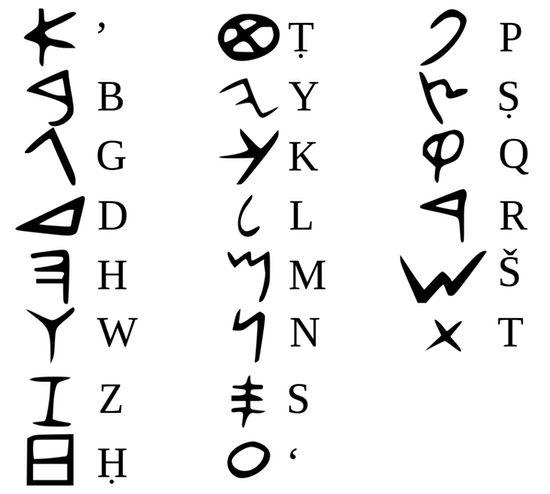 Some have claimed that they also influenced the development of democratic institutions in both Rome and Athens, but this is less verified. Either way, it is clear that the Phoenicians were a very cultured people and some of their ideas may have influenced Greek philosophy, especially the development of Stoicism. Sadly, much of their writings have been lost.
Decline and fall of the Phoenicians
From about the 9th century BC, the Phoenicians came under foreign domination. They were first conquered by the Assyrians and then the Babylonians. In the 6th century BC, Cyrus the Great conquered the Babylonian Empire and Phoenicia. The Phoenicians were able to maintain their identity and much of their autonomy under these Empires. In fact, they were able to prosper.
Then in the 330s BC, the armies of Alexander the Great invaded Phoenicia. Tyre and other cities refused to submit to the Macedonians, and after a long siege, Alexander captured the city of Tyre with much bloodshed and destruction. 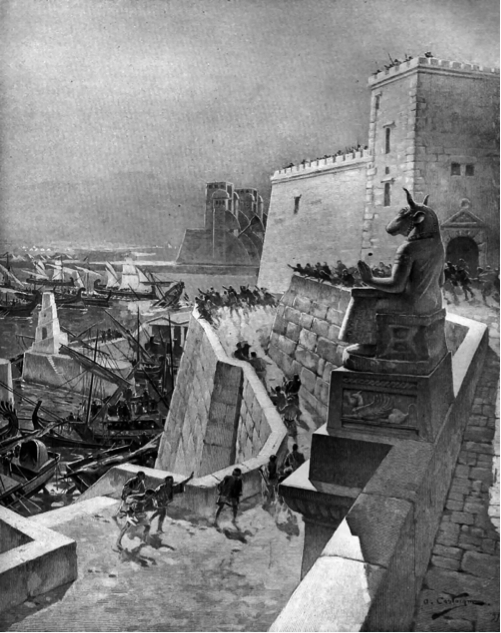 The Phoenicians became part of the Empire of Alexander and later that of the Seleucids. During these centuries of Greek rule, they become Hellenized and lost their ancient culture and identity.
However, the Phoenician culture and identity continued to flourish in the colony of Carthage. It established a large Empire and spread the Phoenician culture, an in fact, a neo-Phoenician tradition survived in North Africa, long after the destruction of Carthage. Clearly their impact has far surpassed their reputation as pirates.