The Battle of Mount Gindarus

By Cam Rea
See Part 1 here: https://classicalwisdom.com/forgotten-roman-general/
With the Amanus Pass secured, Ventidius, head of the Roman forces, pushed south into Syria. Pacorus, the Parthian prince and co-leader of the Roman-Parthian army, was done fighting… at least for now.
He abandoned the province to the Romans in late 39 BCE. With the Parthians out of the way, Ventidius led his forces to the province of Judea.
Ventidius’ mission in Judea was simple and lucrative; it was to rid the province of any remaining Parthians. He was also there to remove the anti-Roman King, Antigonus, and to restore Herod to the throne.
But Ventidius did neither.

Instead, he bypassed Herod’s royal family, who were besieged by the troops of Antigonus on the top of Masada, and went straight for Jerusalem. Ventidius was playing psychological warfare with Antigonus, by making him think that he was going to take Jerusalem.

This, however, was just another ruse.

Ventidius promised not to attack Jerusalem… that is, unless he received vast amounts of wealth from the king. Antigonus had, in his mind, no choice but to capitulate to Ventidius’ demands.

Make no mistake, Ventidius was still going to support Herod and place him on the throne. But while Herod was still far away, and his brother besieged, Ventidius thought he might as well make some money while they wait.
After Ventidius’ coffers were filled, he took the bulk of his forces and headed back for Syria, leaving his second, officer Pompaedius Silo, in charge to deal with the ‘Jewish problem’.

However, King Antigonus would come up with a ploy of his own; he bribed Silo multiple times. Antigonus hoped to buy time so that the Parthians could come to his assistance, while he kept the Romans at bay.

Unfortunately for King Antigonus, this would not happen. When Ventidius returned to Syria, he sent the bulk of his forces beyond the Taurus Mountains to Cappadocia for winter quarters. It was during this time that the Parthian Prince, Pacorus, planned another invasion of Syria and began to mobilize a substantial number of cavalry from the nearby provinces.
Word of Pacorus’ intentions soon spread, reaching the ears of loyal Roman informants, who then relayed the information to Ventidius. Not only was this information crucial for preparation, it also informed Ventidius that a Syrian noble by the name of Channaeus (also called Pharnaeus), who pretended to be a Roman ally, was, in fact, a spy and Parthian loyalist.
Ventidius likely invited Channaeus over for dinner and during their meeting, Ventidius made it clear that he feared the Parthian would abandon their normal route, “where they customarily crossed the Euphrates near the city of Zeugma.”
Ventidius acted concerned over the issue, making it clear that if Pacorus were to invade Syria much further to the south, he would have the advantage over the Romans for it, “was a plain and convenient for the enemy.”

Like the good spy he was, Channaeus returned to his home after the meeting and quickly sent messengers to inform Pacorus of Ventidius’ fears.

Come early spring 38 BCE, Pacorus, unwilling to let go of Syria, led his forces south along the Euphrates River based on Ventidius’ supposed fears of engaging the enemy on a plain.

Once they came to the point of crossing, Pacorus realized that they needed to construct a bridge, due to the banks being widely separated. It took many men and materials, and the bridge was completed only after forty days.
This is exactly what Ventidius wanted. Ventidius’ disinformation bought him much needed time, allowing his legions to assemble.
Once the Parthian forces were in Syrian territory, Pacorus likely expected an immediate attack during the bridge construction or during the crossing, but neither materialized. With no sign of the enemy, Pacorus became overconfident and began to believe that the Romans were weak and cowardly. Eventually however, Pacorus found Ventidius at the acropolis of the city of Gindarus, in the province of Cyrrhestica.
Ventidius had been at Gindarus for three days preparing his defenses when Pacorus showed up.

One would have thought that perhaps Pacorus carefully prepared a plan of action in such a situation…. but no. Instead, Pacorus and his officers tossed out the combined arms strategy of utilizing both heavy cavalry and horse archers in unison. This had worked many times, so they thought they could take the high ground with little trouble. 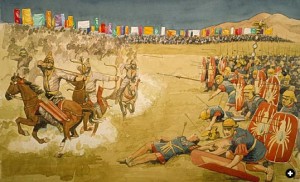 Moreover, the arrogant and overconfident Pacorus, and his nobles, did not want the commoners and horse archers to steal the show, as they did at Carrhae. So they decided to sally up the slope, as they did at the battle of the Cilician Gates.
Once the cataphracts were within five hundred paces of the Romans, Ventidius took advantage of their elitism and rushed his soldiers to the brim and over, until both armies met at close quarters on the slope.
Ventidius’ strategy here was simple, by engaging the elite Parthian cavalry, he had cover from the infamous Parthian horse archers.
You would think the Parthians would have learned from previous experiences what not to do. The result of their knee jerk reaction was devastating. As the Parthian cataphract advanced up the slope, they were quickly repelled back… straight into those still coming up, inflicting great suffering to rider and mount.

This is not to mention those who did make it to the brim were met and repulsed by heavy infantry. And if the heavy infantry did not get them, the slingers would.

These slingers were likely on the left and right side of the Roman infantry, giving them a deadly arc of crossfire. This very well could be the reason as to why we do not hear of the Parthian horse archers partaking in the engagement, since any attempt to rush towards the front would put them in grave danger. 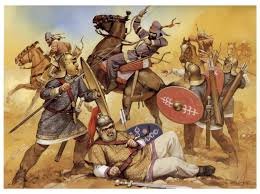 Even though the Parthian cataphracts put up a stiff fight at the foot of the hill, it was not enough.
The Roman infantry likely swarmed the cataphracts forcing them into hand-to-hand combat. With the famous Parthian horse archers neutralized from the fight due to the slingers, there was nothing that could be done to rescue the situation.
In the ensuing chaos, Pacorus likely tried to make one last push. He, along with some of his men, attempted to take Ventidius’ defenseless camp, only to be met by Roman reserves, in which he inevitably lost his life during the melee.
As news spread that Prince Pacorus lay dead, a scramble to recover his body was attempted. While those trying to retrieve his corpse met his same fate, the vast majority of Pacorus’ army quickly retreated. Some attempted to re-cross the bridge that was constructed over the Euphrates, but were caught by the Romans and put to death. Meanwhile, others fled to King Antiochus of Commagene for safety.

This victory shocked Syria. To make sure the Syrians would never rebel against Rome, Ventidius took Pacorus’ corpse, severed the head and ordered that it be sent throughout all the different cities of Syria.

It was a gruesome sight to behold, but the effect it had on the natives was anything other than negative. Instead, “they felt unusual affection for Pacorus on account of his justice and mildness, an affection as great as they had felt for the best kings that had ever ruled them.”
As for the Parthians who sought refuge in Commagene, Ventidius came after them.
Truth be told, Ventidius could care less about the Parthian refugees. Instead, he was much more concerned with how much money he could confiscate from King Antiochus by besieging Samosata, the capital of Commagene, in the summer of 38 BCE. 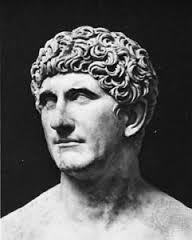 Antiochus offered Ventidius a thousand talents if he would just get up and go, but Ventidius refused the offer and proposed that Antiochus send his offer to Antony.
Once Antony got word of the situation, he quickly made his way to the scene of the action.
Ventidius was just about to make peace and take the lucrative offer when Antony barred him from making such a deal. Instead, Antony removed him from his command and took over the operations from there.

Why? Well, Antony was jealous of Ventidius and wanted in on the glory.

But instead of the desired fame, Antony inherited a protracted siege that went nowhere, and indeed hurt him in the end. When Antiochus offered peace again, Antony had little choice but to accept the now lowered offer of three hundred talents.

After the extortion of Commagene, Antony ventured into Syria to take care of some domestic issues before returning to Athens.
As for Ventidius, he went back to Rome where he received honors and a triumph, for “he was the first of the Romans to celebrate a triumph over the Parthians.”

As Ventidius celebrated his triumph in Rome, Antony seethed in Athens.

Meanwhile, across the Euphrates in Parthia, King Orodes was in grief over the loss of his son and army. Orodes lost the will to speak and eat, and after several days, began to talk to Pacorus as if he was alive.
It was also during this time that the many wives of Orodes began to make bids as to why Orodes should choose their son for next in line to the throne. Each mother understood that there was this nasty habit in Parthia… once a new king was elected he would go out of his way to murder his brothers to secure the safety of his reign. 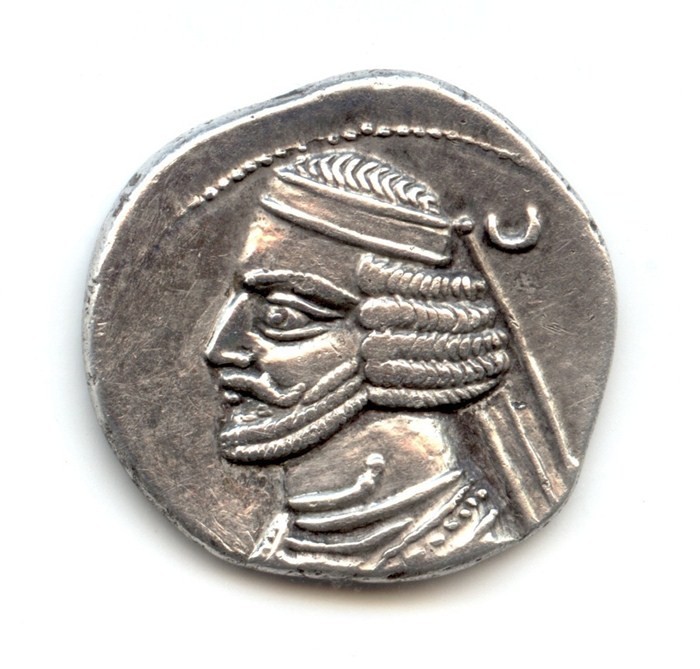 Orodes eventually made his choice and settled on his son Phraates to succeed him. Soon after Phraates was chosen heir to the throne, he began plotting against his father Orodes.
Phraates’ first attempt in murdering his father was with a poison called aconite. This failed due to Orodes suffering from a disease called dropsy (edema), which absorbed the poison and had little effect. Therefore, Phraates took a much easier route and strangled his father to death. To make sure his throne was safe, he murdered his thirty brothers and any of the nobility that detested him or questioned his motives for his acts of cruelty. Phraates was here to stay.
But while Phraates went on a vicious campaign to secure his throne, Mark Antony, jealous of the success that Ventidius had against Parthia, was prepping and planning an invasion of his own.
It was now Antony’s turn to avenge Crassus to fulfill Caesar’s dream.
Facebook