By Cam Rea
Cyrus had already accumulated quite a lot of territory… but that didn’t mean he was done yet. So he cast his eyes around his neighboring regions to see which kingdom was ripe for the taking…. and he settled his gaze on the Kingdom of Babylon around 539 BCE. 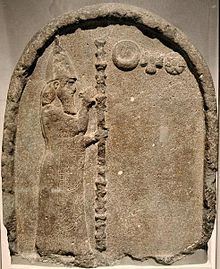 His reason for invading may have been for no other reason than the ineffectiveness of its ruler. King Nabonidus had not only neglected the primary god of Babylonia, known as Marduk, but he had also moved away to Teima in Arabia quite unexpectedly. Moreover, the Babylonian king had decided to stay there for ten years while his son, Belshazzar, ruled the kingdom in his stead. The opinion of Nabonidus was so low, in fact, that his own people, the residents of Babylonia, desired a change in command.

Surely such a weak and unpopular ruler would have made the temptation to invade the Babylonian Kingdom irresistible to Cyrus.

The impending Persian threat of Cyrus forced King Nabonidus to return from Teima around 543 BCE, but it was already too late… by now the people of Babylonia were more interested in Cyrus as their king.

In 539 BCE, Cyrus and his forces officially invaded the Babylonian Kingdom:

In the month of Tesrit, Cyrus having joined battle with the army of Akkad at Upu on the [bank] of the Tigris, the people of Akkad fell back. He pillaged and massacred the population. The fourteenth, Sippar was taken without struggle. Nabonidus fled. The sixteenth, Governor Ugbaru of Gutium and the army of Cyrus made their entrance into Babylon without fighting. Later, having returned, Nabonidus was taken in Babylon. Until the end of the month, the shield-(carriers) of Gutium encircled the gates of the Esagila …

In the month of Arahsamnu, the third day, Cyrus entered Babylon. (Drinking) straws (?) were filled up before him. Peace reigned in the city; Cyrus decreed peace for all Babylon. He installed Gubaru as governor of (all) the governors in Babylon. From Kislev to Adar, the gods of Akkad that Nabonidus had sent to Babylon returned to their sanctuaries. (Glassner, Mesopotamian Chronicles, p. 237-239)

Cyrus’ first battle against the Babylonians at Upu/Opis was a success, and of great significance. By taking Opis/Upu, Cyrus had flanked the Median wall that stretched all the way to Sippar. This meant that the very next day Cyrus was able to take the city of Sippar without a fight, thus having full control of the Median wall.

This was the wall that was intended to keep out the Cimmerians, Scythians, and any other undesirable barbarians… and it was now in Cyrus’ hands. 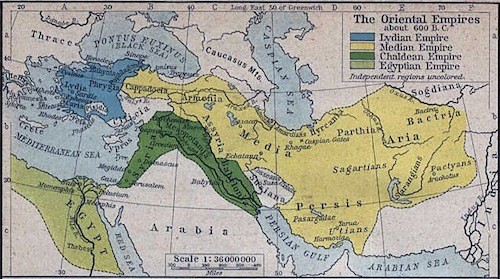 With the Median/Umman-manda wall now out of the way, Cyrus began his march towards Babylon. On October 12, Ugbaru, Governor of Gutium, entered Babylonia without any resistance and arrested King Nabonidus of Babylonia who had earlier fled from Sippar. The former king was then exiled to the region of Carmania.
According to Xenophon, this Ugbaru, also known as Gobryas, was in charge of a vast amount of territory for the Babylonians. When Cyrus invaded, Ugbaru/Gobryas reconsidered and switched sides, joining Cyrus’ army. It was most likely him who guided Cyrus’ forces during the invasion and battle at Opis/Upu.
Now Cyrus himself entered the city on October 29 to restore the festivals and proclaim peace to all Babylon. But did he? Cyrus says on his cylinder:

When I entered Babylon as a friend and (when) I established the seat of the government in the palace of the ruler under jubilation and rejoicing, Marduk, the great lord, [induced] the magnanimous inhabitants of Babylon [to love me], and I was daily endeavoring to worship him.

My numerous troops walked around in Babylon in peace, I did not allow anybody to terrorize (any place) of the [country of Sumer] and Akkad. I strove for peace in Babylon and in all his (other) sacred cities. As to the inhabitants of Babylon [who] against the will of the gods [had/were…, I abolished] the corvee (lit.: yoke) which was against their (social) standing. I brought relief to their dilapidated housing, putting (thus) an end to their (main) complaints.

Marduk, the great lord, was well pleased with my deeds and sent friendly blessings to myself, Cyrus, the king who worships him, to Cambyses, my son, the offspring of [my] loins, as well as to all my troops, and we all [praised] his great [godhead] joyously, standing before him in peace. (Pritchard, The Ancient Near East, Vol 1, p. 207-208)

According to this text, it appears as if the people fully welcomed Cyrus, who only bestowed good to the region. However, this may have been another arrow in Cyrus’ quiver: Propaganda.

In fact, Cyrus’ takeover may not have been so peaceful as he would have us believe. Indeed, it’s been speculated that the city put up a temporal fight.

In 1970, Paul-Richard Berger identified a fragment as being part of the Cyrus Cylinder, which in turn was part of the Yale Babylonian Collection. This fragment mentions Cyrus restoring the city’s inner walls and moats, among other things, within Babylon. Therefore, it is possible that the Persian forces may have initially conducted siege warfare for a short time… though the incident was recorded differently.
Now this is not to say Cyrus was not a peace loving man… But it does appear that he was a propagandist, employing the usual breads and circuses and, in particular, catering to the people through their religious devotion to the Babylonian God Marduk.
While Cyrus and his family were most likely Zoroastrians (as was the common religion of Persia), the King did everything he could to restore the gods of the city to gain the respect of the people. Moreover, his son, Cambyses II, observed the New Year’s rite on March 24, 538 BCE, in what would appear to be humiliation by religious symbolism.
In other words, the high priest of Marduk grabbed him by the ear, forcing him to kneel! Cambyses then said:

“I have not sinned, O Lord of the Lands. I have not destroyed Babylon, nor damaged the Esagila, nor neglected the temple rites.”

Then the high priest of Marduk slapped Cambyses’ cheek! As tears flowed down his face, the god would be pleased and thus concluded the ritual.

The people would have seen this submission to the Babylonian gods by the king’s son very favorably.
Of course, Cyrus may very well have been legit… believing in the god Marbuk and promoting religious tolerance in the region. But one would think that a man, who ruled over such a vast empire and conquered the superpower of the Near East, had to have had the help of a little propaganda now and then.
And so with that Cyrus had the entire region and had become a grand emperor. That, however, was not the end. There was one last campaign to go…
Facebook