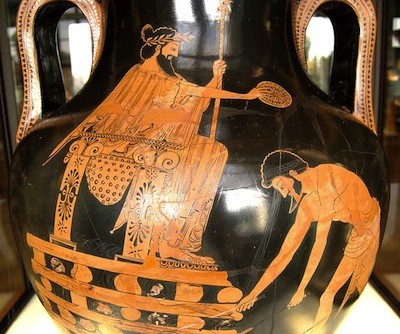 Cyrus and the West

By Cam Rea
Once Cyrus defeated Astyages, he inherited a new problem… And that problem was the western front.
This was because in 585 BCE, Cyrus’ predecessors, the Umman-manda, and the Lydian empire had made an agreement that the boundary between their two territories was the Halys River. The king of Lydia at the time was Croesus, who was famous for his wealth and power throughout Greece and the Near East. Moreover, Croesus was Astyages’ brother-in-law.
Once Astyages was overthrown by Cyrus, Croesus felt the need to avenge his defeat, though in reality, he saw it as an opportunity to extend his borders. However, before Croesus mobilized his forces, he sent embassies with many gifts to the oracle of Delphi to ask the important question. In response, the oracle turned to the men and said:

“If Croesus attacked the Persians, he would destroy a great empire.”

The oracle also suggested to Croesus that he should seek some powerful allies to assist him in his war against Persia.
When Croesus visited the oracle again, he asked how long the Lydian empire would last? To this, the oracle said to Croesus:
“Wait till the time shall come when a mule is monarch of Media: Then, thou delicate Lydian, away to the pebbles of Hermus: Haste, oh! Haste thee away, nor blush to behave like a coward.” (Herodotus, The Histories, p. 27-28)
The mule was none other than Cyrus. While Cyrus was part royalty, due to his mother being an Umman-manda princess, his father Cambyses I was a petty vassal king or, quite possibly, a mere tribal chief. At least in the eyes of Astyages.

Croesus got the answers that he thought were in his favor.

Therefore, in 547/46 BCE, he moved his forces beyond the Halys River and entered into the province of Cappadocia.
In response, Cyrus journeyed to meet the invaders at the border. There he sent envoys to Croesus’ camp with a message ordering Croesus to hand over Lydia to him. If Croesus agreed, Cyrus would allow him to stay in Lydia, but would remove his crown as king, forcing Croesus to accept the title Satrap of Lydia.
Evidently, Croesus turned down the invitation and the two armies battled at a place called Pteria in Cappadocia.
The war took place in the month of November and Croesus was defeated. He and his forces retreated across the Halys River and back into Lydian territory.
But then Croesus made a terrible mistake; he decided to disperse his army for the winter, thinking Cyrus would not attack until spring. Without warning or thought, however, Cyrus and his army fell upon the Lydian forces that were in the process of demobilization.

They were surprised, routed, and defeated.

This was a risky move for Cyrus and his forces, due to the stories of Lydia’s army being superior. Perhaps, Cyrus knew that once the Lydian forces returned home for the winter they would be easier to defeat while they were demobilizing. Or perhaps Cyrus wanted to test whether Lydia was, in fact, more superior… and happily found them wanting.

Once the Lydian forces were routed and were no longer a substantial threat, Croesus fled to Sardis where he took refuge. Many of his supposed allies sent no troops and instead defected over to Cyrus.
Cyrus knew that there was no time to waste and pursued Croesus to Sardis. There he besieged the city, and on the fourteenth day, the city fell. It was during this time that Sparta sent forces to help Croesus, but on hearing that Sardis had fallen, turned back.
Indeed, the word that Sardis fell is said to have sent a shock wave through the Near East.
Sardis, however, was just the beginning. Cyrus the Great wanted all of Lydia.
The Chronicle of Nabonidus mentions the defeat of the previous empire:

“In the month of Nisan, King Cyrus of Persia mustered his army and crossed the Tigris downstream from Arbela and, in the month of Iyyar, [march]ed on Ly[dia]. He put its king to death, seized its possessions, [and] set up his own garrison [there]. After that, the king and his garrison resided there.” (Glassner, Mesopotamian Chronicles, p. 237)

The conquest of Lydia as a whole, however, was far from over, for there were still many Greek city-states mad about the situation. When negotiations between them and Cyrus fell through, the revolts began.

Cyrus decided to not stick around and left for his capital Ecbatana… for he had other issues on his mind.

Instead, Cyrus sent a man by the name Mazares with some troops to squash and enslave all those rebelling throughout Asia Minor. Mazares did just that, until he died of unknown causes. He was immediately replaced by a man named Harpagus, who was successful in putting the final stamp on the revolts. Moreover, he placed Persian garrisons in the areas affected, in order to secure the peace.
However, this was not easy. It took four years before Persian rule could fully be established among the populace.
It was then that Cyrus had to worry about the East…
Facebook