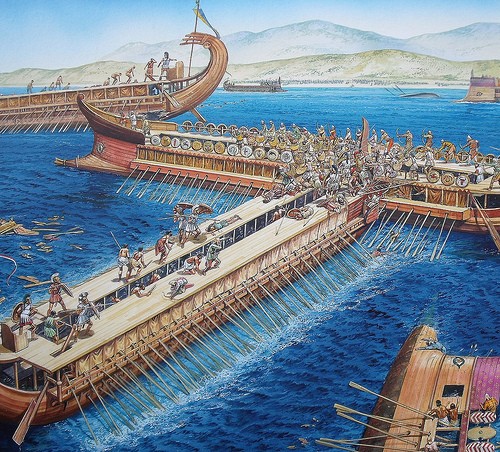 The Rise of Themistocles (part 2)

In a previous article we discussed one of Greece’s most notable and successful general and statesman. It was none other than, Themistocles, who from early on seemed bound for great deeds. During the time of early democracy in Athens he appealed to the average citizen and consequentially wielded great influence in Athenian politics. As one of the first great Athenian politicians, he had several ambitions for his city and for Greece.
Themistocles was a continual supporter of the Athenian navy. It was his belief that the future warfare of Greece would rely heavily on naval power and Themistocles was determined to wield the greatest navy in all of Greece. In 483 BCE large silver deposits were found in a nearby Athenian mine and Themistocles used this as an opportunity to create his navy. He proposed that the silver be used to build 200 Athenian war ships known as triremes.
To Themistocles, this was the destiny of Athens. However, not everyone agreed.
Aristides would often be remembered as Themistocles’ greatest rival. A man born into moderate fortune, he often sided with the aristocracy of ancient Athens. He first gained attention with his decisive leadership as a General at the battle of Marathon. He entered politics around the same time as Themistocles and gained a reputation as being fair, honest, and genuinely concerned with the well being of Athens. He was given the nickname “The Just” and was called by Herodotus as being:

“the best and most honourable man in Athens”- Herodotus, Histories

Aristides was seen as being starkly contrasted to Themistocles. He was considered a man of humility which was rather different from Themistocles, who reveled in personal luxuries and political advancement. Additionally, Aristides looked to maintain a conservative policy and took the stance that Athens should strive to become a land based military power. This went directly against Themistocles’ dream of building a formidable navy; it was an obstacle that Themistocles would be forced to confront.
The tension between Themistocles and Aristides would come to a head in 482 BCE. A rather unique part of Athenian democracy was that the citizens would be allowed to regularly vote to exile a politician of their choosing. The citizens would be told to write the name of a politician on a shard of pottery, and whichever politician received the most votes for exile would be ostracized from Athens for 10 years.

Piece of pottery with the name “Aristides” written

This was done as a check to ensure that wealthy or influential families did not overpower the needs of the citizens. However the rivalry between Themistocles and Aristides was so prominent that the vote of exile essentialy came down to one of the two politicians.
The story goes that an illiterate citizen approached Aristides during the vote for exile. Not knowing who Aristides was, the man asked the politician to write on the shard the name “Aristides”. Aristides asked the man if the politician had ever wronged him. The man is said to have replied:

“I don’t even know him, but it irritates me to hear everybody call him ‘the just'”.

Aristides then wrote his own name on the shard.
Themistocles’ rival was banished from Athens. With no more decisive political opponents blocking him, Themistocles was allowed the opportunity to build his navy. The Athenians were very aware of the imminent Persian invasion and even voted to build more war ships than Themistocles had originally asked for. Athens was now the dominant naval power in all of Greece, and with the Persians growing ever bolder to invade, preparations had to be made.
In 481 BCE, a congress of 30 Greek city-states met to discuss an alliance. All of Greece was in danger of the massive Persian army, which led to a swift agreement among the Greek leaders to band together. At the forefront of this alliance was Athens and Sparta, the cities with the largest navy and land army, respectively. With all the Greek city-states banded together and no political opponents to oppose him, Themistocles became the most powerful man in Athens.
The invasion was coming and Themistocles would be ready.
continue reading here
Facebook