Big News from the Ancient World

Ladies and gentlemen, divers off the coast of Antikythera Island, Greece have discovered….a lead cylinder!
Alright, alright–all joking aside, the recent discovery of this lead cylinder actually marks an extremely interesting bit of news, because as it turns out, this cylinder had a very specific nautical purpose, and if experts are correct in what they’ve called it, this unassuming hunk of lead is currently the only one of its kind.
Bonus points to you, reader, if the name “Antikythera” is sounding familiar as well. Some of you may know that the name is also used to refer to the “Antikythera Wreck”–an ancient shipwreck just off the coast of the island which has yielded invaluable treasures since its discovery (including the lead cylinder which is the star of the show right now)…
A Unbelievable Discovery
The year is 1900. October. Captain Dimitrios Kondos and his team of sponge divers sail right into a brutal storm that brings their return from Africa to a screeching halt. They choose to take shelter on the island of Antikythera and wait out the storm.
As they wait for the storm to pass, the team does what it does best and dives for sponges right off the coast of the island, where diver Elias Stadiatis spots a terrifying sight about 45 meters from the surface. He immediately signals to be pulled back up, and when his gear is taken off him he claims to have seen rotting corpses of men and horses on the seabed. 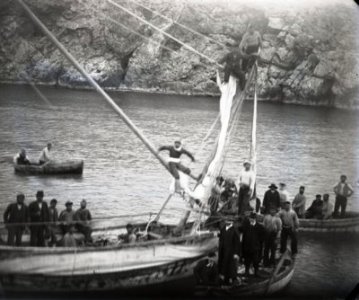 Captain Kondos’ sponge-diving crew
Kondos, believing that Stadiatis is suffering from what will come to be called “nitrogen narcosis” (a condition in which a diver will become “drunk” or lose consciousness after inhaling gases, such as those in an oxygen tank, that have been altered by the high pressure of deep-sea depths), chooses to investigate himself.
When he signals to be pulled to the surface, he returns from the depths holding an enormous bronze arm.
What the sponge-diving team had discovered that day in 1900 was the sunken wreck of a massive ancient ship, Roman in construction–and on that ship, one of the most impressive and historically important hoards of treasure to have ever been found.
A Slow Process 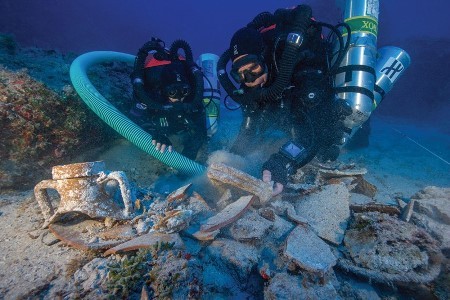 The discovery of what would come to be known as the Antikythera Wreck immediately spurred a process of recovery. The sponge divers, assisted by the Greek Education Ministry and the Royal Hellenic Navy, began working tirelessly to pull artifacts to the surface. They recovered a vast array of statues, priceless glasswork, coins, utensils, pottery, and other prizes–until the death of a diver and the paralysis of several more (caused by decompression sickness) brought the recovery process to a halt.
The search was resumed years later, in 1976, thanks to the initiative of French explorer Jacques Cousteau, who also recovered armfuls of artifacts and brought them to the surface.
Since then, recovery expeditions have been sporadic but always incredibly fruitful, with each expedition yielding new and exciting discoveries. Even to this day, new items and artifacts are being brought to the surface. It is now suspected that the Roman ship sunk sometime in the second quarter of the 1st Century BCE, as it returned to Italy from Greece (then controlled by Rome). Some experts speculate that the vast treasure on the ship was the loot of Roman General Sulla, while others suggest that the looted Greek treasure was being hauled back to Rome to display in a grand victory parade for Julius Caesar. 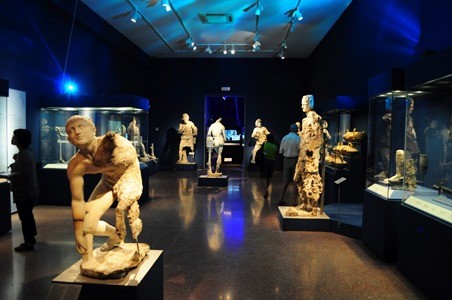 In May of 1902, Spyridon Stais–the former Minister of Education–was in the National Archaeological Museum and was examining the recovered artifacts when he made a mind-boggling discovery: he noticed that a severely corroded lump of bronze was covered with inscriptions and had a small gear embedded in its surface. As he examined it further, he came to realize that he had stumbled across one of the most technologically advanced pieces of craftsmanship from the ancient world. 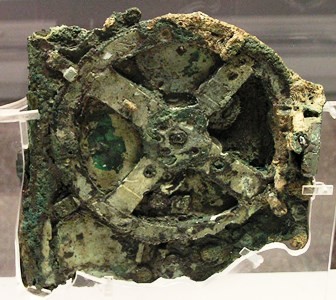 The largest gear from the Antikythera Mechanism
It turns out that the lump of bronze, which came to be known at the Antikythera Mechanism, had once been a complex system of gears and pointers that functioned as an analog computer and orrery, and was once used to predict the movements, positions, and eclipses of astronomical bodies for astrological and especially calendrical purposes (as well as keep track of Olympiads, or the four-year cycles that the Ancient Greeks used to measure the passage of time).
This incredible machine, believed to have been designed by Greek scientists, was composed of at least thirty bronze gears (the largest with a diameter of about 5.5 inches and 223 teeth) and is truly a marvel. Until its discovery, it was not believed that the ancient world had the means or resources to produce such a complex mechanism, and in fact the Antikythera Mechanism is the only one of its kind in existence–modern scientists have uncovered no other examples of such precise craftsmanship, leading many to believe that the technique for creating such a machine was somehow lost. Mechanical objects of such complexity would not be seen again until the 14th Century, in Europe. 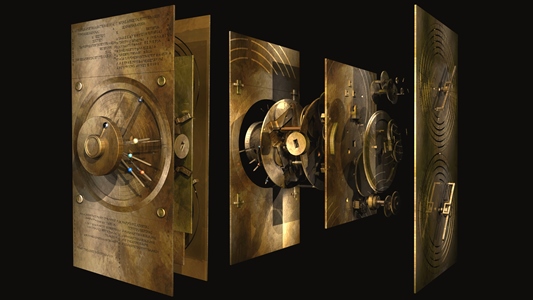 In 2012, a new comprehensive expedition to the wreck, led by American marine archaeologist Brendan P. Foley, was approved by the Greek government. Thanks to new and sophisticated diving equipment (including robots), Foley’s team and Greek scientists were able to discover and recover even more artifacts from the wreck (which is now at a depth of about 200 meters).

One of these artifacts (the most recently discovered) was our unassuming lump of lead, which the divers first assumed was ceramic until they tried to move it and realized it was massively heavy. The cylinder had a hole through one end and came to a blunt point on the other (like a cone), and for a while no one had any idea what it could be.
In the hopes of finding more clues, Foley began to peruse the ancient literature, and in the writings of Greek historian Thucydides he happened to come across a description of a defensive armament known, in its time, as a “dolphin.” 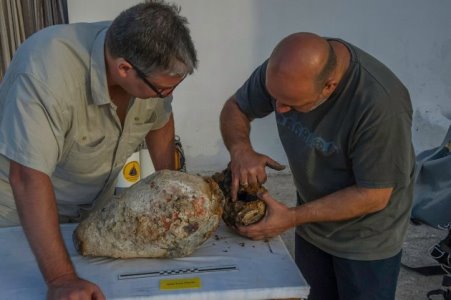 Scientists examine what they believe to be an ancient weapon called a “dolphin”
According to Thucydides, all the biggest ships of classical antiquity were outfitted with a dolphin, and based on his description of the weapon, modern scholars speculate that the dolphin was used almost like a wrecking ball: when an enemy ship came too close, sailors could hoist the dolphin up and let it fall so that it would swing against the enemy ship and smash a hole in its hull.
If Foley and his team are correct in thinking that the lead cylinder they discovered is, in fact, one of these ancient dolphins, the discovery (unassuming as it seems) is amazing. This would be the only artifact of its kind to be discovered, making it priceless and massively important to maritime history. And, of course, it marks the second time an artifact recovered from the Antikythera Wreck has, in some way, changed history.
But the search continues. Foley and his team–like all good explorers and scientists–know that these discoveries are only the tip of the iceberg. They plan to return to the site in September in the hopes of uncovering new treasures.
And who knows what this ship–so long at the bottom of the ocean and yet so laden with priceless riches–will yield up next?
Facebook