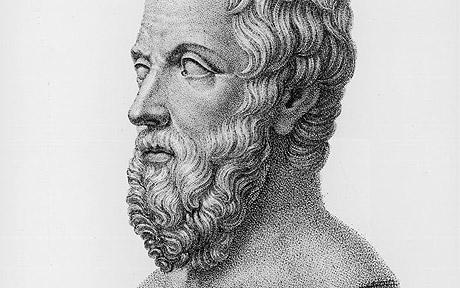 In 450 BCE, Herodotus wrote about a specific sort of cargo boat that he saw along the Nile, which, until now, no one believed existed. Historians and archeologists were doubtful about Herodotus’ description of the ship because they had never seen any evidence…and indeed, while he is known as the “father of History”, many of Herodotus’ travel accounts appear ‘outlandish’ and are often chalked up to storytelling rather than accurate descriptions.
Fortunately Team Herodotus is getting a win after the discovery of a cargo vessel in the Nile delta, the details of which appeared in a new published monograph by archaeologist and shipwreck specialist Alexander Belov.
The newly found discovery, officially dubbed ship 17, was excavated from the sunken Egyptian port city of Thonis-Heracleion, which was submerged after a series of natural disasters. The site was first detected in 2000 by maritime archaeologist Franck Goddio and since then has been the location of more than 70 vessels dating from the 8th to the 2nd century BC, along with statues, gold coins, and the ruins of a temple.

The hull of “Ship 17,” a wreck discovered in the sunken port city of Thonis-Heracleion.

“It wasn’t until we discovered this wreck that we realized Herodotus was right,” Damian Robinson, director of the Oxford Centre for Maritime Archaeology, explained. “Herodotus describes the boats as having long internal ribs. Nobody really knew what that meant…That structure’s never been seen archaeologically before. Then we discovered this form of construction on this particular boat and it absolutely is what Herodotus has been saying. Here we have a completely unique form of construction, which is not seen anywhere else.”
The author of the Histories, a nine volume work which essentially founded the field of History, Herodotus traveled extensively in Egypt and even dedicated 23 lines of his famous tome to the construction of the Nile boat, known by locals as a baris. Herodotus tells of shipbuilders arranging planks like bricks and employing long internal ribs called tenons. Moreover, the sails were made of papyrus, the mast of acacia, a crescent-shaped hull and a steering rudder that went through the hole in the keel.

Herodotus records the creation of “thorny acacia” boats that “cannot sail up the river unless there be a very fresh wind blowing, but are towed from the shore.”
“They have a door-shaped crate made of tamarisk wood and reed mats sewn together, and also a stone of about two talents weight bored with a hole,” Herodotus continued. Essentially, as the crate floats in front of the ship, the stone grounds it from behind. These ensure the boat sails rapidly on a straight path by using opposing forces. This type of construction had not been previously described.

There are a few key differences between the boat Herodotus describes and ship 17. For instance, the latter likely measured up to 92 feet, considerably longer than those in Herodotus’ account. Moreover, the Greek historian described ships with shorter tenons and no reinforcing frames, while the discovered vessel has longer tenons and several reinforcing frames.
While ship 17 is believed to have sunk during the first half of the 5th century B.C.. it probably dates to the 6th century B.C. and was “reused as a … floating jetty at the end of its working life as a ship,” says Robinson.
With such specifics about the construction of the boat, and yet no archeological evidence, you can see why historians felt Herodotus was embellishing an account… especially considering the “Father of History”’s horrific reputation with regards to accuracy, even in historic times. Plutarch, for instance, wrote an entire treatise called On the Malice of Herodotus, stating that one could fill several tomes with the “lies and fictions” of the Greek historian. Herodotus’ descriptions of his travels through Egypt, Africa, and Asia Minor have often been relegated to the fiction department.
With time, however, more and more of Herodotus’ accounts have been vindicated. For instance, he claimed to witness fox-sized “ants” in Persia, who spread gold dust as they dug their mounds, something historians and biologists quickly dismissed. But it turns out that there is actually a Himalayan marmot that does this, and the Persian words for “mountain ant” and “marmot” are quite similar. Sounds like another win for Herodotus.
Facebook