The Mausoleum of Augustus: Propaganda, Deification and Dynasty

By Ben Potter
The story of Augustus (née Octavian) is one of those tales from the classical world familiar even to those whom do not routinely ‘leave the phenomenal world, and enter into the sublime’.
Though we’re all well aware of the impressive résumé of the protagonist of HBO’s Rome, let’s quickly recap a few of his highlights:

– Claims descent from the Trojan prince Aeneas and the goddess Venus
– Adopted son and heir of the murdered then deified Julius Caesar
– Avenged said father with the help of swaggering ladies’ man Marc Antony
– Defeated said philanderer and his Egyptian girlfriend, Cleopatra, for control of The Greatest Empire the World has Ever Known (TM) 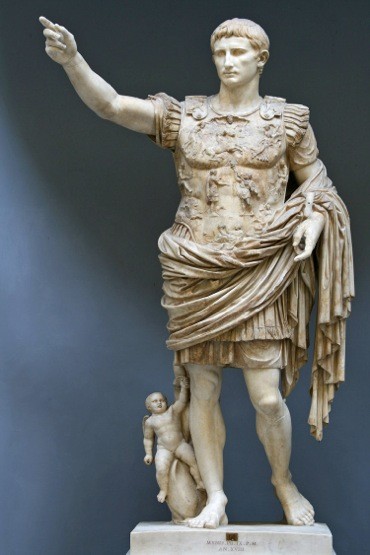 Pretty impressive stuff. But what then? Prosperity, expansion, peace, stability, wealth, high morality, art, literature, incredible public services and, perhaps most importantly, a constant supply of food are but some of the boasts the princeps could make from his tenure as emperor.

But this is small fry… it seems clear that Augustus had big plans for himself, and indeed for Rome’s future. Plans that would only truly take seed on 19th August 14AD – the date on which Imperator Caesar Divi Filius Augustus’ long and illustrious life finally came to an end.
What came next was Augustus’ crowning glory; deification and a hand-picked succession.
In the first part, deification cemented the emperor’s position as not merely one of the greatest men to have ever lived, but as something more: something eternal, ethereal, indissoluble and, literally, supernatural.
The second part gave Augustus what had been denied to that Macedonian meteorite, Alexander the Great: a dynasty! A dynasty not only in the sense of emperors, rather than senators, ruling Rome (the very hubris for which Julius Caesar had been assassinated), but also in that those emperors were of Julio-Claudian bloodline.
Though there were obviously many facets that went into securing this improbable and impressive duel feat, one of the finest examples of Augustus’ devotion to securing both his terrestrial and celestial legacies is his impressive Mausoleum.
The gargantuan structure (87 metres in diameter and 40 metres high) was built on the Campus Martius (field of Mars), and would have dominated the landscape of Rome from the Tiber to the Via Flaminia. 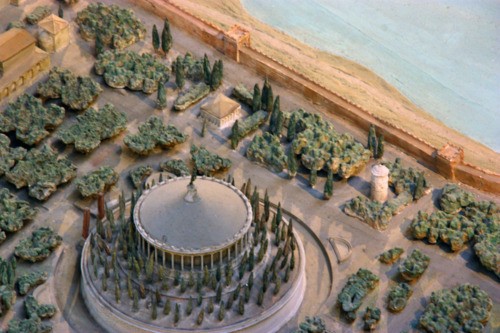 What the Mausoleum would have looked like in its time
Almost everything about this impressive monument seemed designed to fulfill the two above goals – as well as reinforce the two invariable and continuous aims of the regime, i.e. to legitimize and glorify itself.
The location of the Mausoleum was no coincidence, but carefully planned to gain maximum effect. The Campus Martius was not merely an ancient and sacred area of the city, but was especially reserved as the final resting place of exceptional citizens.
In hindsight this seems the most natural place in the world for the first, and possibly greatest, Roman emperor to be buried, but ground was broken on the Mausoleum as early as 28BC, only three years after the battle of Actium (in which Antony was defeated) and, crucially, a year before Augustus became emperor – while he was still only Mr. Octavian, consul of Rome.
This bold move, a move that had unequivocal echoes of the thing Romans hated most of all, Hellenistic-style kingship, would have caused a bedewing of the armpits on even the most lightly-knit senatorial togas.
That such an abode was a fitting resting place for a god may well have been an instinctive reaction upon seeing it. However, the link to dynasty was a shade subtler as, though invariably referred to as the Mausoleum of Augustus, the tomb was in fact designed to house the entire imperial family. The significance of this is that anyone related to the emperor (by blood or adoption) would be automatically given a burial on a site previously reserved only for those who had made an outstanding contribution to the state. 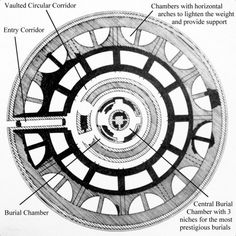 A diagram of the Mausoleum, viewed from above
The design of the building was also significant; not only in its regal and hubristic scale which would surely have delivered the message ‘I have conquered’ to the average awe-struck plebeian (and, indeed, senator), but also because it was, extremely unusually for the time, circular.
Though it’s possible the tomb’s style was a mere coincidence, a personal preference or a passing whim, it’s hard to imagine that a politician as adept as Augustus would have neglected the connotations such a building brings up.
It’s thought that the Mausoleum was round either to evoke Etruscan architecture and therefore possibly (and rather riskily) make an association to the old kings of Rome, or otherwise to reinforce the idea that Augustus was of Trojan lineage; an oblique nod to Homer’s Iliad in which such structures are mentioned. 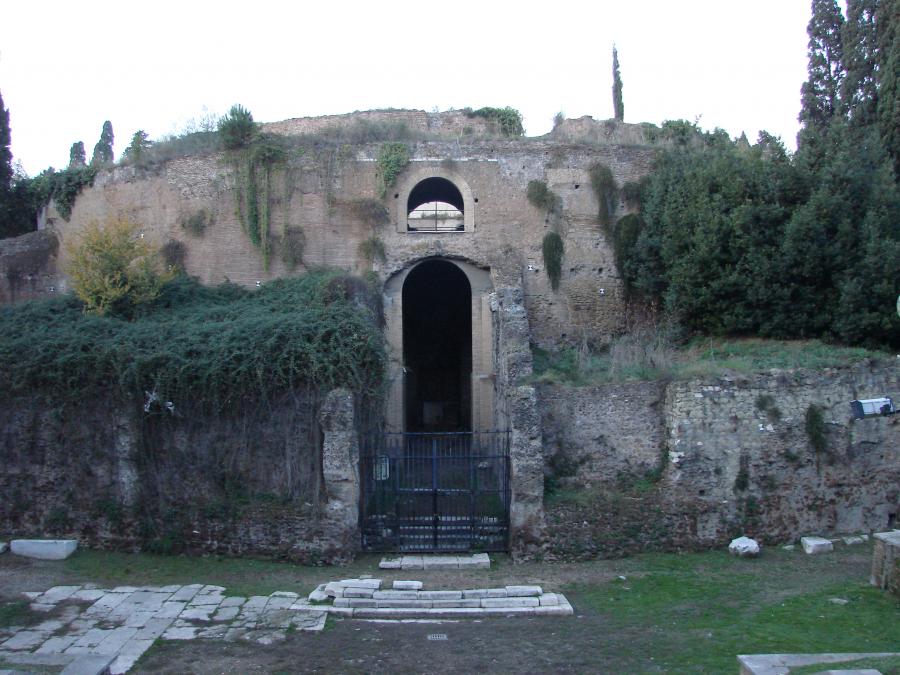 All that is left of the Mausoleum today is its core
If it seems improbable that the Roman public could have swallowed such a flagrant piece of regal self-aggrandizement, it’s worth considering that they may have been placated by the notion that a king, if a Roman king, is still better than an Egyptian one.
Augustus’ daring decision to build a gigantic tomb for himself and his family while only in his thirties was a stark message that he not only intended to serve Rome during his life, but also to remain truly Roman after his death. This message of posthumous permanence and loyalty was in stark contrast to that of Marc Antony who stated in his will (illegally acquired and published by Augustus) that he wished to be buried alongside Cleopatra in Egypt.
Thus the tomb was not merely a symbol of loyalty, but also a contrast to the burial chamber of a vanquished and ‘foreign’ foe. It would have taken a very, very brave senator, especially if he’d previously been sympathetic to Antony, to raise his voice against this patriotic exhibition.
The question of loyalty would have been further forced home by the pair of pillars outside the entrance of the Mausoleum upon which were inscribed a copy of the Res Gestae. This was a self-penned manuscript Augustus wrote outlining his achievements (i.e. what he had done for Rome) as well as reminding everyone that technically he did not have any supreme power, but merely ‘surpassed others in influence’.
However, the icing on the cake was the Solarium, a gigantic sundial built next to the Mausoleum, the needle of which was an Egyptian obelisk – a blatant message to the people of Rome to remember upon which side their bread was buttered.
N.B. Another great work of Augustan propaganda, the Ara Pacis, would later complete this tripartite of imperial glorification. Unfortunately the eminently believable and utterly charming hypothesis that the dial cast a shadow on the Ara Pacis on Augustus’ birthday is unverifiable.
Though Augustus obviously wasn’t there to witness his own interment he probably had a pretty good idea of what went on, as he’d left three sealed scrolls with the Vestal Virgins (the same lovely girls from whom he’d purloined Antony’s will) giving instructions for the order of the day.
Though we’ve no idea if what occurred was in line with Augustus’ wishes, it seems more than likely that it was. 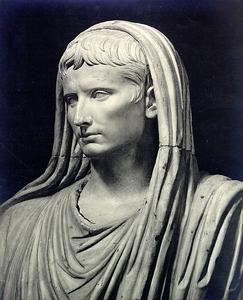 Along with plenty of ivory, purple (the most precious thing in the ancient world) and gold, including a golden likeness of Augustus, almost everything at the funeral was contrived to ensure the deceased was seen as someone in mid-apotheosis – an eagle was even released from the burning pyre – and that his heir, Tiberius, would be next in line to the throne of Rome.
According to Tacitus, Tiberius himself was the one to ‘provide for the last honors of his father, whose body he could not leave’; an excellent image of power smoothly changing hands. Moreover, the fact that the two eulogies were read by Tiberius and his own heir, Drusus, shows a distinct hierarchy was already in place.
The Mausoleum was a monument of subtle balance, not necessarily architecturally, but in terms of the relationship between hated kingship – that which Antony had sought – and loyal and traditional Roman values – to which Augustus ‘aspired’.
The great success of the Mausoleum was that, for all of its regal evocation, it technically did not overstep that deplorable line. In contrast the towering Egyptian obelisk would have left no doubt as to Antony’s kingly intentions.
That such a vast and splendid structure could contain an iota of subtlety is testimony to the shrewd and fertile mind of Augustus, a man whose great intellect foresaw that ‘the hand that wields the knife shall never wear the crown’.
However, Augustus had no desire for the crown, only for the powers that went with it, the knowledge that they would be passed on to his chosen successor, and (because why stop when you’re on a roll?) that he would be able to oversee Tiberius from his lofty perch alongside the other gods of the Roman pantheon.
Facebook