I can hear some of you thinking now: Concrete? Is she really writing about concrete?
Believe me, reader, the same sort of thoughts passed through my mind when I began to do my research for this article–but let me ask one question (especially to those of you lucky ducks who have gotten to visit Italy): Is there anything more impressive than to turn a corner in Rome and come face to face with an incredibly ancient structure that, somehow, is still standing after thousands of years? 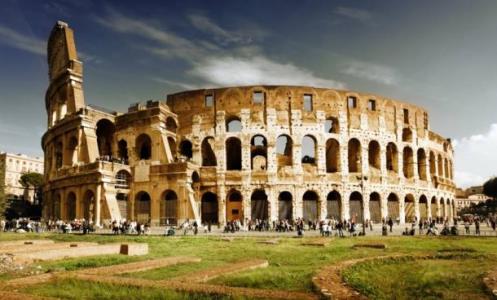 There’s just no doubt: Ancient Roman architecture holds a gold medal for durability. Despite some crumbling here or there, there are so many structures–particularly harbors–that continue to stand soundly unbroken and un-ruined after two thousands years or more. They’ve largely withstood wars and earthquakes and encroaching modernity. But how?
One of the reasons is simply that many of these structures were made entirely or partly out of concrete–but it’s not just the presence of concrete that helped. We know from experience in modern times that concrete is strong but not infallible, and certainly not capable of withstanding two thousand years of wear and tear! No, it wasn’t the presence of concrete necessarily–instead, it was the type of concrete.
Just Add (Salt) Water 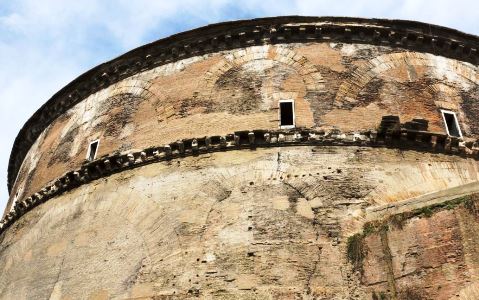 For many years, the durability of Roman concrete baffled historians and scientists alike. In particular they were perplexed by the concrete that had been used to construct ancient harbors–even after two thousand or more years of being pummeled by saltwater, the harbors were largely intact.
To put this into perspective, Portland cement, which is the most commonly used concrete blend today, is serviceable for only about fifty years if exposed constantly to saltwater. Not a small difference!
What, then, made Roman concrete so different? The answer wasn’t found until recently, when, a few years ago, researchers began to take an interest in the subject. Research teams led by both Italian and American scientists collected samples of ancient Roman concrete from a breakwater in Pozzuoli Bay, Italy. The concrete was analyzed in state-of-the-art facilities in Italy, United States’ U.C. Berkley, Germany, and even Saudi Arabia, where Advanced Light Source technology allowed researchers to analyze the structure of the concrete at a miniscule scale. 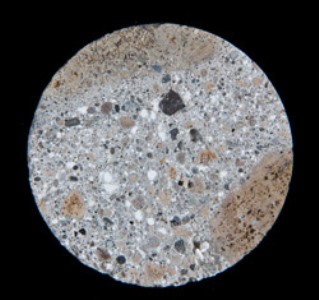 Sample of Roman concrete
What they found was incredibly exciting: instead of fighting to create a substance that could withstand the eroding force of the sea, ancient Romans had harnessed that force and incorporated it into their concrete making process. They mixed lime and volcanic ash and, after packing the mixture into wooden molds, they submerged it all in seawater. The saltwater then set off a chemical reaction–it hydrated the lime in such a way as to make it react with the ash, which ultimately formed an incredibly sturdy, solid bond.
(For all you chemists out there, this was apparently a C-A-S-H bond, or calcium-aluminum-silicate-hydrate)
It’s largely for this reason that ancient Roman concrete was so incredibly durable–especially when exposed to saltwater.
A Better Alternative?

One of the most important aspects of this super-strong ancient concrete, besides its durability, is its overall carbon footprint.

Though Portland cement–our modern concrete–has been in use now for nearly two centuries, it can’t really hold a candle to Roman cement when it comes to the issue of environmental impact. The cement industry (cement being a major component of concrete) is, worldwide, a primary producer of carbon dioxide, which is an atmospheric pollutant and greenhouse gas. Apparently, the cement industry alone accounts for approximately five percent of all carbon dioxide emissions worldwide, which is a staggering amount for one industry. 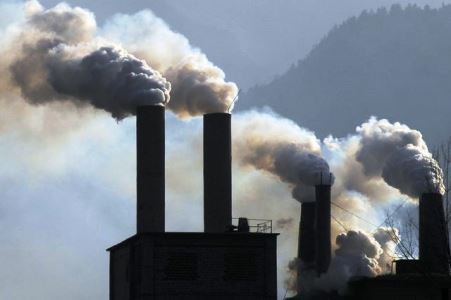 Much of this cement is produced specifically for the manufacturing of Portland cement concrete mix. In fact, according to researchers, roughly nineteen billion tons of Portland cement are used every year.
The biggest problem with the production of this cement is really the production methods themselves. To make the cement, a mixture of limestone and clays has to be heated to 1,450 degrees Celsius (2,642 degrees Fahrenheit), and it’s this process–which burns up so much fossil fuel and burns it so hot–that produces the majority of the carbon dioxide.
Roman concrete, on the other hand, because of its unique ash mixture, uses far less limestone and only requires that the limestone be baked at 900 degrees Celsius (1,652 degrees Fahrenheit)–which uses only a fraction of the fossil fuels used to make Portland cement and results in fewer carbon dioxide emissions overall–and the finished product is hundreds of times stronger.
Clearly, the carbon footprint of our modern concrete is not so great–at the end of the day, we are causing more environmental damage to produce a concrete that just doesn’t bind nearly as well as Roman concrete.
Can we bring this dead secret back to life?

The question is: has all this new research led us to a grand solution for the issue of carbon emissions in the cement/concrete industry? Could it revolutionize the way we build, and the durability of our structures?

The tentative answer is yes…and no. 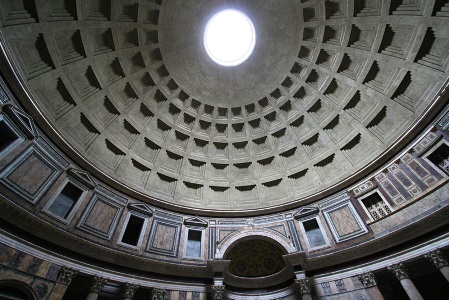 The famous Duomo is a solid shell of Roman concrete
According to experts, it’s a complicated issue. While the obvious answer seems to be that Roman concrete is a better, stronger, more environmentally-friendly option, many experts believe that it would be impractical to begin using it again, largely because of the setting time. In the modern world of construction, concrete needs to harden quickly and efficiently–something that seawater concrete can’t do (and we all know how our modern society values convenience and speed).
However, the discovery of this ancient “secret” to concrete production is having some positive benefits. Inspired by the ancient Romans’ use of volcanic ash, scientists have been experimenting with the use of fly ash (a waste product of coal-burning, which is readily available in large quantities in many countries) and even, again, volcanic ash (in those countries where fly ash is not so available) to produce stronger, greener forms of concrete.

According to some experts, a successful outcome to these experiments could lead to concrete mixes that utilize local resources intelligently and replace at least forty percent of the worldwide demand for Portland cement.
It’s just one more way in which our society is learning to look to the past, and learn from our ancestors. Sometimes, modernity doesn’t have all the answers after all–sometimes the answers were discovered and perfected long ago. All we have to do is rediscover them.