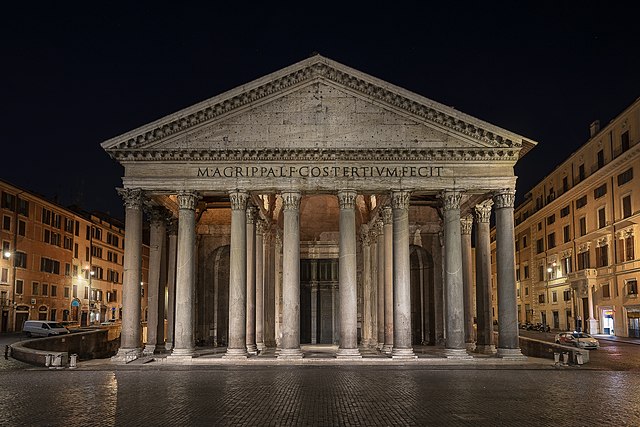 The Romans were great builders and are still revered as great engineers. One of the greatest buildings they constructed was the Pantheon. A new theory argues that the building was designed to act as a sundial during the Spring Equinox, which falls between March 19 and 21. This view could offer insights into Roman religion and ceremonial life.

The Pantheon was constructed during the reign of Emperor Augustus. Its Latin name means the temple of ‘all the gods’ and it played a very important part in the religious and public life of the city.

In the 2nd century AD, the structure was destroyed by a fire and was rebuilt by Emperor Hadrian (c 145 AD). The site, with its concrete dome (rotunda), is considered an architectural masterpiece and remains the largest unreinforced concrete dome in the world. In the interior of the Pantheon is a massive circular floor and access is through a splendid portico flanked fifty-foot granite columns.

Panoramic view of the Pantheon in Rome

Today, the Pantheon is an extremely popular tourist site as well as a functioning Catholic Church.

In the dome, there is a circular aperture known as an oculus, through which light enters the interior. It was once widely thought that the twenty-seven foot wide oculus was designed to provide light and to help to cool the building in the brutal Roman summers. However, it has now been proposed that the oculus was constructed to make the Pantheon a giant sundial, tracking time by the location of the sun in the sky.

The dome of the Parthenon, photographed with a fisheye lens by Victor Grigas, 2016

According to their study, the movement of the sunbeams appeared in the Pantheon’s interior via the oculus. This was important also for the calculation of the calendar. It is also believed that the temple played a role in the calculation of the equinoxes, which is when the night and day have equal hours and the sun sits directly above the Equator.

Researchers believe that beams of light hit above the door of the Pantheon at the Spring and Autumnal equinoxes, which were very significant dates to the Ancient Romans.

The Pantheon also played an important part in the ceremonial life of Rome. It is conjectured that the building was designed to allow light from the oculus to fall on the doorway on the 21st of April ever year, the anniversary of the founding of Rome. This was part of the celebration of the foundation of the city, one of the most important civic events in Rome.

The Pantheon was primarily a temple and it was once filled with statutes of the gods. It is believed that the light that fell from the oculus was a symbol of the solar deity, indicating his presence in the Pantheon.

The Pantheon, as a sundial, may have played an important part in the ceremonial life of the Empire. Rituals and rites were used to proclaim and justify the absolute power of Emperors. The light falling through the oculus in the dome would have fallen on the Emperor during rituals, thus demonstrating his association with the sun gods.

In Rome, the Emperor was also the chief priest and it is possible that the light was used in some long-lost ceremony. The maintenance of the calendar was traditionally one of the main roles of the Emperor. In an era before mechanical clocks, the calendar and calculating time was often very challenging. Emperors such as Marcus Aurelius would have visited the Pantheon to track the movement of the sun as part of his management of the calendar, which symbolized his central role in the state. The Pantheon thus emphasized the sacred role of the Emperor and his role in ruling time.

The Pantheon at night

The Pantheon is one of the most stunning buildings ever constructed. However, it is also still somewhat mysterious and enigmatic, even after almost 2,000 years. The theory that it was used as a sundial could help us to better understand this structure. If the temple was designed to act like a sundial it likely had a greater role in the ceremonial, public and civic life of the city than previously thought.

Marder, T.A. and Jones, M.W. eds., 2015. The Pantheon: from antiquity to the present. Cambridge University Press.