The Palace of Knossos

When we think about the birth of western civilization, we recall Knossos and its stunning palace. Crete is called the cradle of Europe, after all, and Knossos, the largest Bronze Age archaeological site on Crete, is reputed to be Europe’s oldest city!
Knossos is thought to be the first settlement in the Neolithic period, though it is in fact, one of many Neolithic remains scattered across Crete. The site of Knossos is multilayered, revealing inhabitation for many, many years. From humble origins as an encampment, it eventually became the location of the most famous palace on the island, the Palace of Knossos. 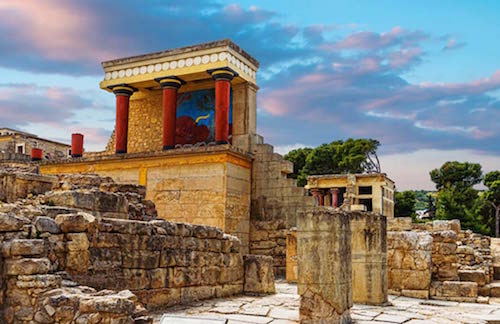 Founding a civilization
The Palace at Knossos flourished between 2700-1100BC when the Minoans shone as a prime example of Bronze Age Aegean civilization, both on the island of Crete and on other smaller Aegean islands. This palace, as well as the one at Phaistos, is remarkable due to the magnitude of its construction.
At the height of its power, the Palace of Knossos boasted the skills and resources of its inhabitants. These included oil, wine, and wool. Another source of revenue for the palace was the expansion of trade; the island of Crete was a humming hub of international import and export, with goods being shipped between Egypt, Italy, and the islands of the Cyclades. 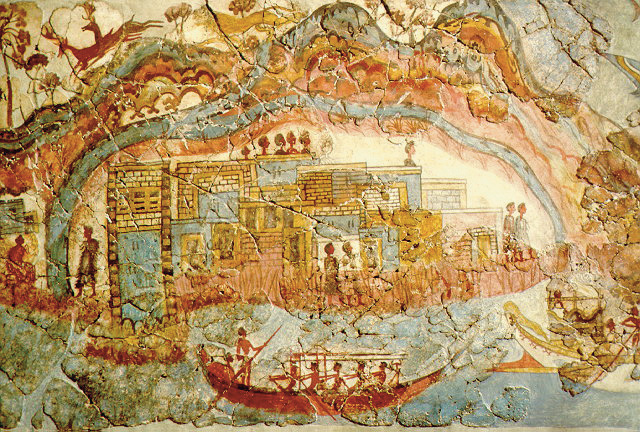 The beginning of Knossos
What happened to Knossos, and why is it a ruin now? Well, the first Neolithic palace site dates around 7,000BC; these were wattle and daub structures and would have created a small village like enclosure.
The inhabitants of the hill-site eventually began using mud-bricks that were set upon stone bases. These houses usually had several rooms, with walls at right angles and centered doorways. They also had huge stones supporting areas that were under the greatest stress. The inner walls were smoothed over with mud-plaster, and flat roofs of interwoven branches were covered in mud. Inside, the rooms had earthen-hearths that were usually located in the center of the room. 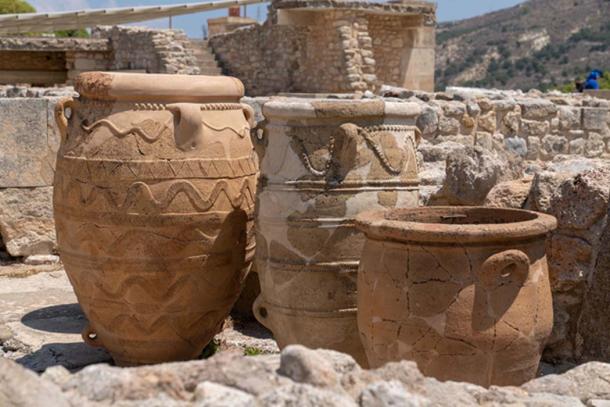 Millennia-old amphorae in Knossos that have been pieced back together. (Ioannis Syrigos)

By the Middle Neolithic period, 5,000-4,000BC, the settlement housed between 500-1000 people. At this point, wood was being used in construction and houses became more family-oriented. Cretan family-life and society had arrived.
The Height of the Palace of Knossos
Around this time the first signs of the palace began to emerge. This ‘Great House’, as it’s known, was 100m2, built from stone, and had five rooms. Given the size and layout, it was more likely to be for public use rather than private/domestic occupation. The new palace made extensive use of colonnades. (Ioannis Syrigos)

Fast-forward a few centuries to around the second millennium BC and you’ll see the construction of first Cretan palaces that we might recognize. Earthquakes destroyed these palaces around 1,700BC, but they were soon rebuilt even grander than before.
At its height, Knossos covered a massive 3-acre site. It had an enormous staircase, staterooms on the top floor, sixteen storage rooms for pithoi (large earthenware containers), and an impressive plumbing system that included bathrooms, toilets, and drainage! 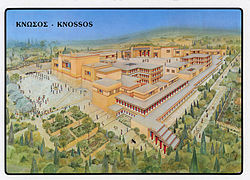 Reconstruction of the palace at Knossos

The palace’s construction included both stonework and timber, the rooms were lit with light-wells, and the wooden columns were ornate, not just structural. Adding to the majesty of the palace were brightly colored frescoes that depicted everyday Minoan life, some of which are still visible today.
All this splendor was attributed to the mighty sea empire that King Minos developed. According to Herodotus, this powerful empire lasted for hundreds of years, reaching its peak around 1,450BC before a series of events began its steady decline. The Decline of the Palace of Knossos
Much like the story of Pompeii, Knossos fell victim to a cataclysmic event; the volcanic eruption on the island of Thira (Santorini) c. 1,370BC. At the time, mainland Greeks had begun to inhabit the island, bringing with them their influences, both artistic and military. 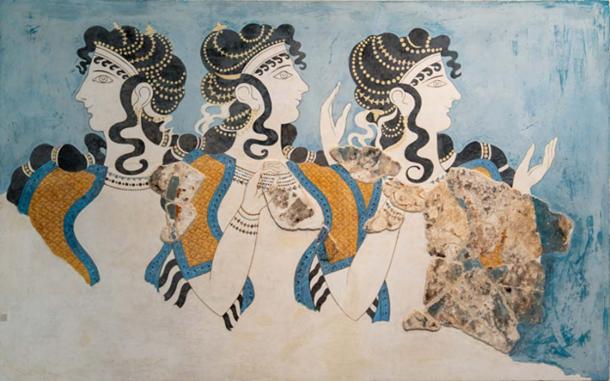 The famous Ladies in Blue fresco that once adorned the walls of Knossos palace. (Ioannis Syrigos)

After the eruption, it’s thought that successive invasions by the Mycenaeans brought about the final blows. Soon, as with much of the island, the palace lay in ruins. The site was abandoned and it passed into the dusty pages of history. That is, until the early 20th century when a man named Sir Arthur Evans, inspired by stories of a Minotaur and fabled kings, began exploring. The rest, as they say, is history.
Facebook