The history of pie is both storied and interesting in and of itself. Did you know, for instance, that the Ancient Greeks are thought to have originated the pie pastry, as can be seen in Aristophanes’ plays (5th century BC), where there are mentions of sweetmeats including small pastries filled with fruit? Neither did I until today.
But that’s not what we are talking about, delicious as it sounds.
Instead, we are delving into a different pi, though it also shares some of its origins in Ancient Greece.
Yes, dear reader, we are investigating the captivating phenomena of a mathematical constant, the algorithm of which was devised by the brilliant (and perhaps evil) Archimedes around 250 BC.
While math may not peak your interest initially, the history and discovery of this unique irrational number should. And if nothing else, it might take you back to your old school days.
Think of it as a mathematical madeleine moment.
But first, let’s go over what exactly Pi is.
This curious number (of which the nerdist of memory masters like to repeat) was originally defined as the ratio of a circle’s circumference to its diameter. In other words, pi equals the circumference divided by the diameter (π = c/d). Conversely, the circumference is equal to pi times the diameter (c = πd). No matter how large or small a circle is, pi will always work out to be the same number.
Following me still? Well, it’s going to get tricker for a moment.
π is also an irrational number, and no, not like your mother in law. This means it can never be written as a fraction of two whole numbers, and it does not have a terminating or repeating decimal expansion. Essentially, there is no exact value, seeing as the number does not end. The decimal expansion of π goes on forever, never showing any repeating pattern. I’ll say it again for emphasis – it never repeats and it goes on forever.
I’ll just let the magnitude of that sink in for a moment.

Animation of the act of unrolling circumference of a circle having diameter 2, illustrating the ratio π.

Now, since π is irrational, all we can ever hope to do is get better and better decimal approximations… which is where the magnificent, albeit ultra nerdy, competition of reciting known numbers comes in.
Why Pi? Why not cake?
Good question, dear reader – I can tell you are hungry…. For knowledge. (waaa waaa)
Pi is called Pi because the 16th letter of the Greek alphabet, π (Pi), was employed as an abbreviation of the Greek word for periphery (περιφέρεια) which means circumference.
That was easy enough! Now, onto the history of this minxy little number.
Pi actually goes much further back that Ancient Greece. In fact, several ancient civilizations came up with fairly accurate values for π, including the Egyptians and Babylonians, both within one percent of the true value.
In Babylon, a clay tablet dated 1900–1600 BC has a geometrical statement that, by implication, treats π as 25/8 = 3.125. In Egypt, the Rhind Papyrus, dated around 1650 BC but copied from a document dated to 1850 BC, has a formula for the area of a circle that treats π as (16/9)2 ≈ 3.1605.
There is even a biblical verse where it appears pi was approximated:
And he made a molten sea, ten cubits from the one brim to the other: it was round all about, and his height was five cubits: and a line of thirty cubits did compass it about. — I Kings 7:23 (King James Version)
Then, around 250 BC the Greek mathematician Archimedes created the first ever algorithm for calculating it. His system was so popular, it dominated the math scene for over 1,000 years, and as a result, π is sometimes referred to as “Archimedes’ constant”.
Around 150 AD, Greek-Roman scientist Ptolemy, in his Almagest, gave a value for π of 3.1416, which he may have obtained from Archimedes or from Apollonius of Perga. 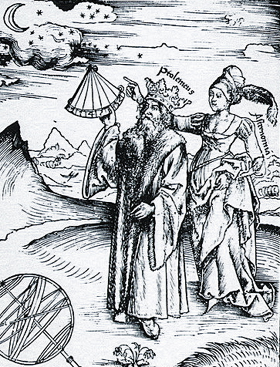 Engraving of a crowned Ptolemy being guided by the muse Astronomy, from Margarita Philosophica by Gregor Reisch, 1508.

Later on in 480 AD, Chinese mathematicians used geometrical techniques to approximate to seven digits and Indian mathematics made it to about five in the 5th century AD. The historically first exact formula for π, based on infinite series, was not available until a millennium later, when in the 14th century the Madhava–Leibniz series was discovered once again in India.
Today we use algorithms based on the idea of infinite series from calculus, and our ever-faster computers allow us to find trillions of digits of π.
Now, while all this history is no doubt fascinating, these pages are dedicated to the Greeks and Romans! So let’s go back to Archimedes and his revolutionary technique.
First off, if you don’t know much about Archimedes, you should…and not only because he was likely a evil super-mind. 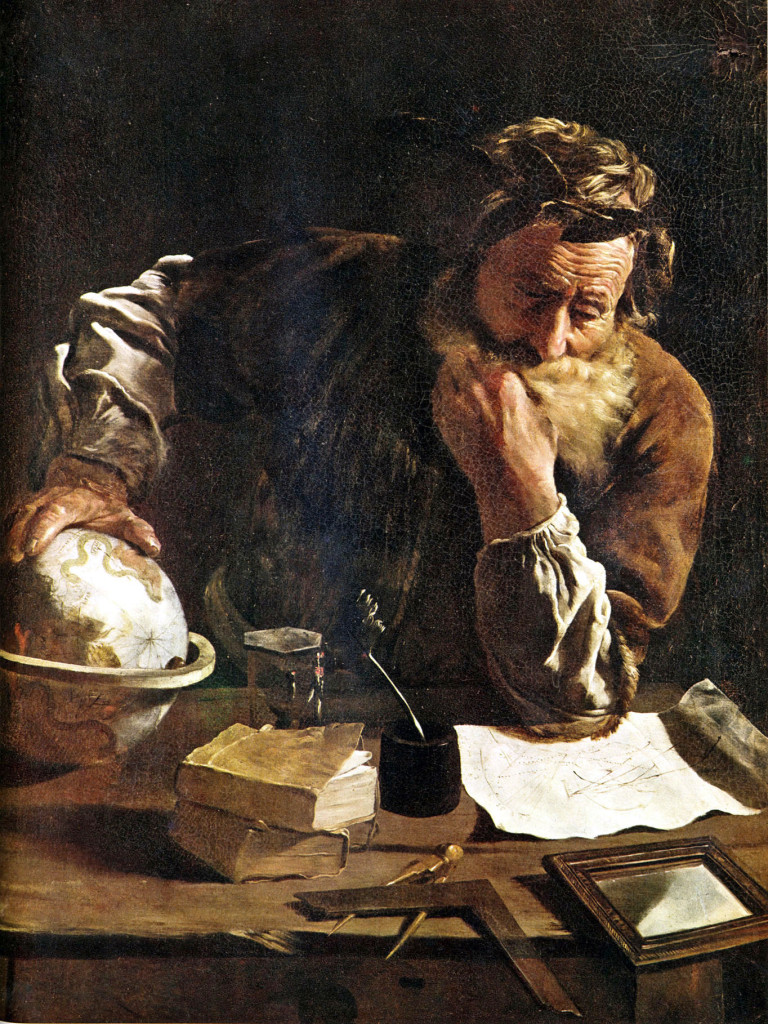 Born in Syracuse on the island of Sicily in 287 BC, Archimedes was a Greek mathematician, scientist, mechanical engineer and inventor who is considered one of the greatest mathematicians of the ancient world. Among his many epithets, he is considered the father of simple machines, as he introduced the concept of the lever, the compound pulley, as well as inventions ranging from water clocks to the famous Archimedes screw.
He also designed devices to be used in warfare such as the catapult, the iron hand, and the death ray. In fact, Archimedes was one of the world’s first mathematical physicists whose inventions were actually applied to the physical world. (And there are fantastic re-enactments of these cruel creations. As seen here and here).

So it should be no surprise that such a mind was capable of figuring out the humble circle!

But how did it do it?

Archimedes used the Pythagorean Theorem to find the areas of two polygons. He then approximated the area of a circle based on the area of a regular polygon inscribed within the circle and the area of a regular polygon within which the circle was circumscribed. The polygons, as Archimedes mapped them, gave the upper and lower bounds for the area of a circle, and he approximated that pi is between 3 1/7 and 3 10/71.
Wait…. what? Let’s go over that again, but with pictures.
Basically, Archimedes observed that polygons drawn inside and outside a circle would have perimeters somewhat close to the circumference of the circle.
As described in Jorg Arndt and Cristoph Haenel’s book Pi Unleashed, Archimedes started with hexagons:

If I haven’t lost you, this was a revolutionary method, one that differed from the earlier approximations in a fundamental way.
Previously, the number was calculated in a very approximate way, usually by simply comparing the area or perimeter of a certain polygon with a circle.
Archimedes’ technique was new as it was an iterative process, one where you can get a more accurate approximation by repeating the process, using the previous calculation of pi to obtain a new, more correct number.
Now, some consider the celebration of Pi and its forever, never repeating decimals as an overblown party. But, we here at Classical Wisdom beg to differ. Any day that makes people stop and appreciate math and its marvels is certainly worthwhile… and I think we all know the late, great Stephen Hawking would agree, may he rest in peace.