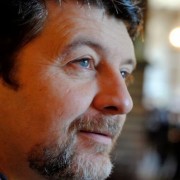 Donald Robertson is a cognitive-behavioural psychotherapist, trainer, and writer. He's the author of six books on philosophy and psychotherapy, including Stoicism and the Art of Happiness (2013) and How to Think Like a Roman Emperor (2019). Donald was born in Scotland, and lived in England for over twenty years, but emigrated to Canada where he became a citizen and now lives in Toronto. He is one of the founding members of the Modern Stoicism nonprofit organization and regularly teaches courses and speaks at conferences on Stoic philosophy and its applications to modern living.

How to Eat Like a Stoic: The Ancient Diets of Cynicism and Stoicism

Donald J. Robertson, Writer and Cognitive-behavioural Psychotherapist, author of “The Philosophy of Cognitive Behavioural Therapy” The ancient Cynic and Stoic philosophers were very interested in food. (At the end of this article you’ll even find a modern recipe for Stoic soup.) They talk both about what we should eat and how we should eat it, if we want to live wisely

Marcus Aurelius and the Sophists on Justice

Stoicism and the “Great Discourse” of Protagoras by Donald Robertson, author of “How to Think like a Roman Emperor” Learn more from Donald in his upcoming 4 week course, “Marcus Aurelius: Life and Stocism” – starting August 4th What is it, then, that arouses your discontent? Human wickedness? Call to mind the doctrine that rational

By Donald Robertson, author of How to Think Like a Roman Emperor: The Stoic Philosophy of Marcus Aurelius. (Thanks to Landessammlungen Niederösterreich, Archäologischer Park Carnuntum for permission to use photographs of their exhibits.) If thou would’st master care and pain, Unfold this book and read and read again Its blessed leaves, whereby thou soon shalt see

By Donald Robertson, author of How to Think Like a Roman Emperor: The Stoic Philosophy of Marcus Aurelius, discusses strategies for coping with anger derived from the ancient wisdom of Stoicism. The Roman emperor Marcus Aurelius was renowned for his ability to remain calm in the face of provocation. On one such occasion, a notoriously