The Annals by Tacitus – VI 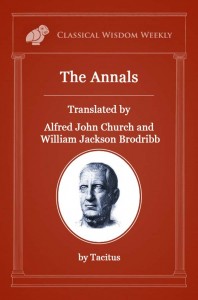 Cneius Domitius and Camillus Scribonianus had entered on the consulship
when the emperor, after crossing the channel which divides Capreae
from Surrentum, sailed along Campania, in doubt whether he should
enter Rome, or, possibly, simulating the intention of going thither,
because he had resolved otherwise. He often landed at points in the
neighborhood, visited the gardens by the Tiber, but went back again
to the cliffs and to the solitude of the sea shores, in shame at the
vices and profligacies into which he had plunged so unrestrainedly
that in the fashion of a despot he debauched the children of free-born
citizens. It was not merely beauty and a handsome person which he
felt as an incentive to his lust, but the modesty of childhood in
some, and noble ancestry in others. Hitherto unknown terms were then
for the first time invented, derived from the abominations of the
place and the endless phases of sensuality. Slaves too were set over
the work of seeking out and procuring, with rewards for the willing,
and threats to the reluctant, and if there was resistance from a relative
or a parent, they used violence and force, and actually indulged their
own passions as if dealing with captives.

At Rome meanwhile, in the beginning of the year, as if Livia’s crimes
had just been discovered and not also long ago punished, terrible
decrees were proposed against her very statues and memory, and the
property of Sejanus was to be taken from the exchequer and transferred
to the imperial treasury; as if there was any difference. The motion
was being urged with extreme persistency, in almost the same or with
but slightly changed language, by such men as Scipio, Silanus, and
Cassius, when suddenly Togonius Gallus intruding his own obscurity
among illustrious names, was heard with ridicule. He begged the emperor
to select a number of senators, twenty out of whom should be chosen
by lot to wear swords and to defend his person, whenever he entered
the Senate House. The man had actually believed a letter from him
in which he asked the protection of one of the consuls, so that he
might go in safety from Capreae to Rome. Tiberius however, who usually
combined jesting and seriousness, thanked the senators for their goodwill,
but asked who could be rejected, who could be chosen? “Were they always
to be the same, or was there to be a succession? Were they to be men
who had held office or youths, private citizens or officials? Then,
again, what a scene would be presented by persons grasping their swords
on the threshold of the Senate House? His life was not of so much
worth if it had to be defended by arms.” This was his answer to Togonius,
guarded in its expression, and he urged nothing beyond the rejection
of the motion.

Junius Gallio however, who had proposed that the praetorian soldiers,
after having served their campaigns, should acquire the privilege
of sitting in the fourteen rows of the theatre, received a savage
censure. Tiberius, just as if he were face to face with him, asked
what he had to do with the soldiers, who ought to receive the emperor’s
orders or his rewards except from the emperor himself? He had really
discovered something which the Divine Augustus had not foreseen. Or
was not one of Sejanus’s satellites rather seeking to sow discord
and sedition, as a means of prompting ignorant minds, under the pretence
of compliment, to ruin military discipline? This was Gallio’s recompense
for his carefully prepared flattery, with immediate expulsion from
the Senate, and then from Italy. And as men complained that he would
endure his exile with equanimity, since he had chosen the famous and
lovely island of Lesbos, he was dragged back to Rome, and confined
in the houses of different officials.

The emperor in the same letter crushed Sextius Paconianus, an ex-praetor,
to the great joy of the senators, as he was a daring, mischievous
man, who pryed into every person’s secrets, and had been the chosen
instrument of Sejanus in his treacherous designs against Caius Caesar.
When this fact was divulged, there came an outburst of long-concealed
hatreds, and there must have been a sentence of capital punishment,
had he not himself volunteered a disclosure.

As soon as he named Latinius Latiaris, accuser and accused, both alike
objects of execration, presented a most welcome spectacle. Latiaris,
as I have related, had been foremost in contriving the ruin of Titius
Sabinus, and was now the first to pay the penalty. By way of episode,
Haterius Agrippa inveighed against the consuls of the previous year
for now sitting silent after their threats of impeaching one another.
“It must be fear,” he said, “and a guilty conscience which are acting
as a bond of union. But the senators must not keep back what they
have heard.” Regulus replied that he was awaiting the opportunity
for vengeance, and meant to press it in the emperor’s presence. Trio’s
answer was that it was best to efface the memory of rivalries between
colleagues, and of any words uttered in quarrels. When Agrippa still
persisted, Sanquinius Maximus, one of the ex-consuls, implored the
Senate not to increase the emperor’s anxieties by seeking further
occasions of bitterness, as he was himself competent to provide remedies.
This secured the safety of Regulus and the postponement of Trio’s
ruin. Haterius was hated all the more. Wan with untimely slumbers
and nights of riot, and not fearing in his indolence even the cruellest
of princes, he yet plotted amid his gluttony and lust the destruction
of illustrious men.

Several charges were next brought, as soon as the opportunity offered,
against Cotta Messalinus, the author of every unusually cruel proposal,
and consequently, regarded with inveterate hatred. He had spoken,
it was said, of Caius Caesar, as if it were a question whether he
was a man, and of an entertainment at which he was present on Augusta’s
birthday with the priests, as a funeral banquet. In remonstrating
too against the influence of Marcus Lepidus and Lucius Arruntius,
with whom he had disputes on many matters, he had added the remark,
“They will have the Senate’s support; I shall have that of my darling
Tiberius.” But the leading men of the State failed to convict him
on all the charges. When they pressed the case, he appealed to the
emperor. Soon afterwards, a letter arrived, in which Tiberius traced
the origin of the friendship between himself and Cotta, enumerated
his frequent services, and then requested that words perversely misrepresented
and the freedom of table talk might not be construed into a crime.
The Annals by Tacitus