The Myth of Daedalus and Icarus 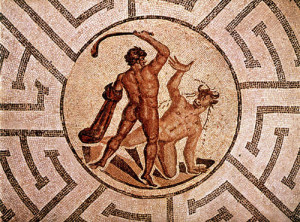 The story of Daedalus and Icarus is a popular myth that recounts the escape from Crete by the crafty inventor Daedalus and his son Icarus. It is a story that is often attributed to the Roman poet Ovid in his magnum opus Metamorphoses.
The general theme of the story involves the ingenuity and brilliance of man, and the misuse of that brilliance that can often lead to our own downfall.
Daedalus is mentioned in the story of Theseus as the inventor of the labyrinth that housed the Minotaur. He was described as an inventor and a scholar whose ingenuity and intelligence was unmatched by any other.
The labyrinth was said to have been one of his greatest creations. It was constructed in such a way so that any man sent into the labyrinth would become hopelessly lost and unable to escape. It was only with the help of Ariadne, the princess of Crete, that Theseus was able to navigate the labyrinth, slay the Minotaur and escape. Ariadne had been told the secrets of the labyrinth by Daedalus and in this way Theseus was able to leave the maze. 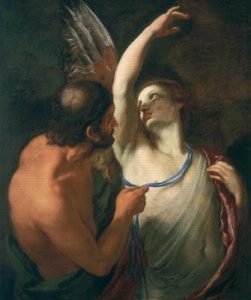 After Theseus escaped the island, King Minos was so enraged that he locked the inventor away in a tower for his part in helping the Athenian hero escape. Other versions of the story tell that Daedalus was put away long before the arrival of Theseus, so the secrets of the labyrinth would not be known to the public.
Daedalus and his son, Icarus, spent their days locked up in a tower, unable to escape by land or sea. All the ships leaving the island were carefully monitored by King Minos, who was determined to not let Daedalus escape. So the inventor decided that if he could not escape by sea, then he would escape the island of Crete by riding on the winds. The original Roman poem describes this inspiration when Daedalus states:

“Tho’ Earth and water in subjection laid,
O cruel Minos, thy dominion be,
We’ll go thro’ air; for sure the air is free.”

Daedalus collected the feathers of the numerous birds that roosted in his tower prison. He constructed a set of wings that could be worn by a man by using candlewax and thread to hold the feathers in place. He then constructed wings for his son Icarus, who had been cast away in the tower as well. When the wings were complete the father and son prepared to jump from the tower and fly to freedom. Before they did so, Daedalus warned his son not to fly too low to the sea, as the mist would dampen his wings and cause him to fall. He also warned the young boy not to fly too high as the warmth from the sun would melt the wax that held the feathers and cause him to fall to earth. Daedalus warns:

To wing your course along the middle air;
If low, the surges wet your flagging plumes;
If high, the sun the melting wax consumes:

Daedalus and his son leaped from the tower and soared across the land and out to sea. The farmers and herders stopped their work and looked up at the duo flying like birds. The citizens of Crete thought that the pair were gods, never before had they seen such a miraculous sight. 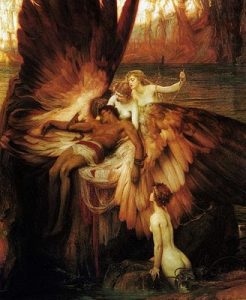 The two flying men traveled at peace for some time. They passed the islands of Samos and Delos and eventually flew past Lebynthos. All the while they were careful not to fly too low or too high. However, Icarus eventually would leave the guidance of his father and begin to fly higher and higher as if too reach heaven.
True to his father’s predictions, Icarus flew too high and the heat from the sun began to melt the wax holding the feathers in place. Soon, the wings disintegrated entirely and Icarus plummeted down through the air. He screamed in fear as he tried to fly away, yet his wings were no longer capable of flight. He splashed into the sea and drowned.
Daedalus looked for Icarus diligently. He would cry out “Icarus, Icarus where are you?!” He finally found his body floating among the waves, feathers strewn about the surf. Daedalus lamented the death of his child and buried his body in the nearby land. Daedalus named the land Icaria, in memory of his son.
The inventor would later travel safely to Sicily, where he would build a temple to Apollo. He hung up his wings to the god as an offering. He never took them down; Daedalus would never fly again.
Facebook