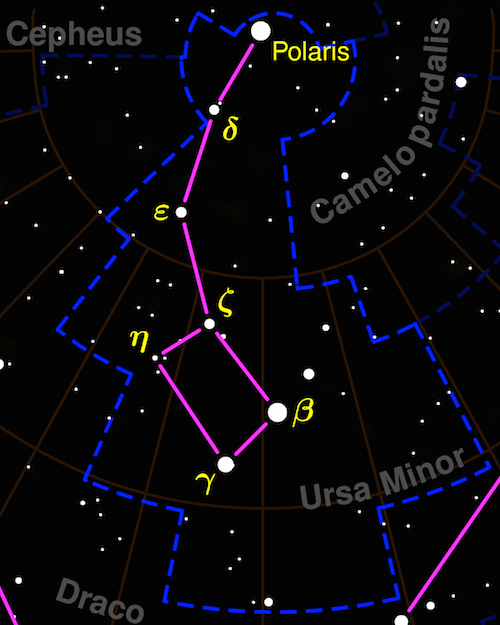 By Danielle Alexander, Contributing Writer, Classical Wisdom
The night sky might seem like a random collection of twinkling stars to some, but to others, the stars create images and patterns filled with stories and legends. These images and patterns are known as constellations, and they’ve been captivating human imagination for as long as records have existed – and long before we started to write things down too!
One of the oldest, most recognizable constellations is the ‘saucepan set’ – sorry, I mean the Ursa Major and Ursa Minor, or Big and Little Dippers. They’ve been known under many names, sometimes as Bears, or even a Waxon and an Oxherd. Where do all these different names come from?

Ancient Greek Astronomy?
There are 88 officially recognized constellations according to the International Astronomical Union, and most of these have been documented since 150 A.D, by Ptolemy in his The Almagest. Ptolemy, in turn, was drawing his information from thousands of years of astronomical observations.
During the 6th century BC, The Greeks absorbed the astronomy and mythology from their older neighbors, the Mesopotamians, Persians, and Egyptians. The Mesopotamians had all of their constellations recorded between 1300-1000 B.C, making some of the information we have today over 3,000 years old.
For the ancients, the stars aided in navigation, the tracking of time, and constellation movements were likely employed to follow the movements and phases of the moon. Not unlike modern humans, the twinkling abyss sparked their imagination, and the star clusters had legendary tales of mythic figures attached to them.
Eratosthenes, a Greek living in North Africa from c. 276 BC to c. 194 BC, unintentionally created the canon of the astral mythos most commonly recognized today, but undoubtedly some of his tales originate from much older skies.
Astral Mythology of Ursa Minor
This constellation has stories spanning cultures, yet has often been connected to its larger partner, the Ursa Major. The academic discussion around the Ursa Minor constellations’ mythos seems to be considerably quiet, especially compared to its more sizable companion. 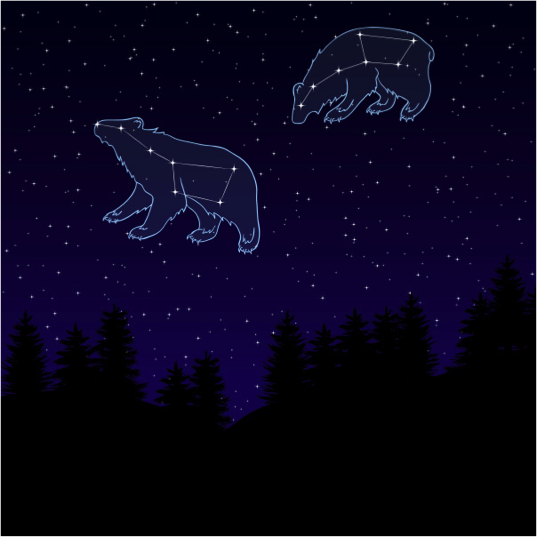 The Greater and Lesser Bears are visible from the Northern Hemisphere nearly all year round. (Image: Amelia’s Amazing Space Adventures)

This collection of stars is most commonly seen as bears, or as the Plow. The larger Ursa Major has been within mythos whisperings for a lot longer, and so the Ursa Minor is not mentioned in the Native American tribes’ mythos of the bear. Instead, the larger Ursa Major represented a bear being pursued by three hunters (the stars of the handle). Within Mongol tradition, the stars are identified as seven hunters or brothers. Tales such as these often include the loss of a star, and it is within Hindu cultural memory belief that the stars of Ursa Minor gradually dimmed through history. For Shinto omenology, a person who is unable to see the dimmed constellation will not live to see the end of the year.
Within Babylonian astronomy texts, Ursa Minor is named ‘Wagon of Heaven’ and connected to the goddess Damkina. It’s from these texts that we see the different names and mythos behind the constellation – yet the sources are rather silent concerning Babylonian astral mythos.
Bear With Me…
Bear symbolism for this constellation duo can have its early origins traced to India. The constellation was known as the seven Rishis, or sages, which has the Sanskrit meaning of ‘bear.’ However, even within Europe dating to 30,000 years ago, evidence of bear worship has been found, including paintings, bear skulls, and artifacts. Furthermore, throughout Eurasian and American cultures, the Celestial Great Bear is often connected to the ancestors of humans and are frequently totem animals of choice within shamanistic communities. It’s believed that the bear connection emerged pre-emigration across the Bering Strait land bridge, indicating an age of Paleolithic, or older. 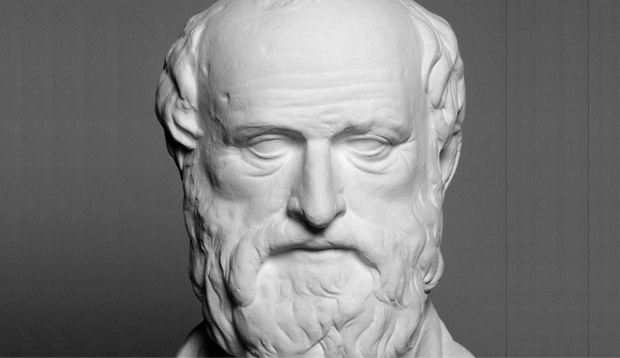 When the Greek polymath Eratosthenes wrote, the pole star was the third star on the tail, furthest from the body of the Ursa Minor bear. This star is known as Polaris and is the star closest to the celestial north pole that we have even today.
For the Greeks, Ursa Minor was partly connected to the myth of Callisto – a nymph in servitude to Artemis, impregnated by notoriously promiscuous thunder god, Zeus. After her banishment and birthing, the poor maiden was transformed into a bear, and death loomed over her future. However, Zeus felt pity upon her and placed her and her babe, Arcas, in the heavens. (That is one of the many renditions – this is more elaborately discussed in Ursa Major.) Sometimes, Arcas dies with his mother and other times, and he is free to survive in the Arcadian countryside as a man. 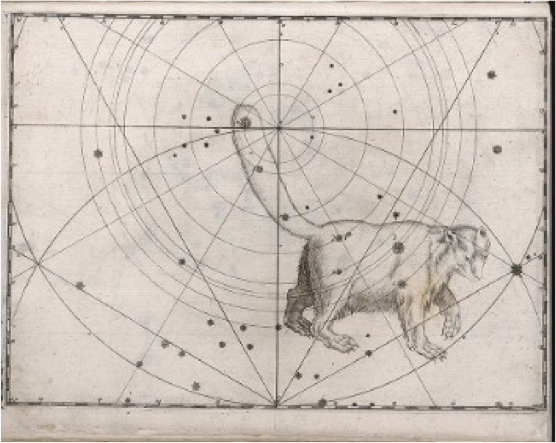 Artwork of the Bear is common on constellation maps (Image: Johann Bayer (1655) courtesy of David Rumsey)

Another Greek account states that the smaller bear was one of Zeus’ nurses, Cynosura – one of the nymphs that had protected and raised him when in hiding from his baby-eating father, Cronos. Interestingly, the name Cynosura can also be connected to the Callisto tale, as it means ‘dog’s tail’. Some claim that it was her hunting dog, which was killed the same time she was, that was placed amongst the stars.
Similarly, and seemingly connecting the myths, is the tale of Phoenike. This similar-to-Helike-sounding maiden also fell under the unfortunate seduction (if you could call it that) of Zeus. While poor Callisto was banished and punished, Phoenike is instead honored by the goddess Artemis and placed amongst the stars.

Interestingly, the Phoenicians, peoples of the sea who taught the Greeks the alphabet, called the Ursa Minor constellation Phoenike – rather humbly – after themselves; they claimed its discovery and superiority of its use within their sea-faring navigation. It’s possible that the Phoenicians transferred this myth to the Cretans at Knossos, who connected it to their mythos of Zeus being nursed by bears!
Bear to Bootes
Stepping away from the bear symbolism, the smaller Ursa constellation has also been described as the pole star bound Wagon that is being pushed by the Ursa Major Bootes, the Oxherd. Mythology attributes Bootes to another constellation as well, which is down-right confusing. It’s unknown if this is the same constellation just with differing stars, or if the constellation remains the same with a varying mythos. The mythos is muddled, and extremely unclear. 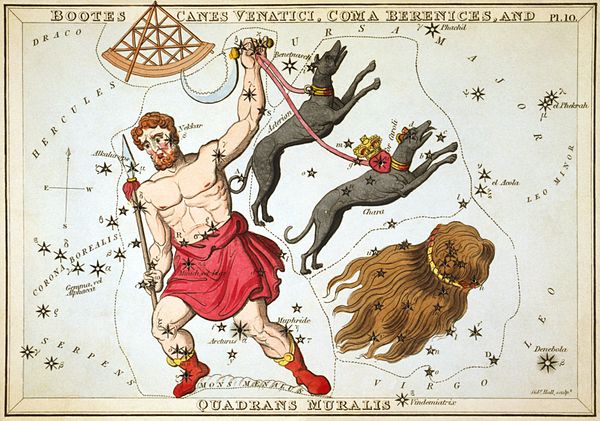 Boötes as depicted in Urania’s Mirror, a set of constellation cards published in London c.1825. In his left hand he holds his hunting dogs, Canes Venatici. Below them is the constellation Coma Berenices. Above the head of Boötes is Quadrans Muralis, now obsolete, but which lives on as the name of the early January Quadrantid meteor shower. Mons Mænalus can be seen at his feet.

Bootes is also known as the Athenian Icarius, who Dionysus taught the art of winemaking. This proved fatal for the herder, who was torn apart in a drunken frenzy after sharing his new art. His daughter, with the aid of her dog, recovered her father’s body but was so grief-stricken, she hung herself. Dionysus placed her in the sky as Virgo, her dog as Canis Minor or Canes Venatici, and her father as Bootes.
However, the herdsman Bootes is also connected to the tale of Jason and the Argonauts. He was a priest in Athens, dedicated to Athene and Poseidon, and married to his niece, Chthonia. On the Argonaut’s roll-call, the Athenian is named to be the ‘bee-master,’ and on the journey, it was Bootes who attempted to swim away from the Sirens’ call, just to be swept away by Aphrodite to Mount Eryx.
On this mountainside, Aphrodite, in an attempt to make young her Anatolian lover Adonis jealous, seduced the bee-master and birthed him a son baring the name of the mountain on which they had conceived him. Eryx grew to be a wrestler who fought with Heracles – losing his life and kingdom in the process, and his daughter, Psophis, provided Heracles two sons. Interestingly, Mount Eryx is famous for its bee cult. 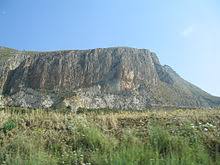 Monte Erice, or ancient Greek Mount Eryx, is a mountain of Sicily, in the province of Trapani.

Bears, Bootes = Baffling!
In the end, the tale of Ursa Minor is garbled. This is not that shocking for Greek mythology now, is it? It’s a little frustrating that there is so little information, and the sources are confusing and conflict with each other. To this day, people are aware of the Celestial Bears, even if they do not know why they are called the Bears – they certainly do not look like a fluffy killing machine but do look kind of like a plough.
What do they look like to you? (Definitely saucepans – right?)
—
Bibliography