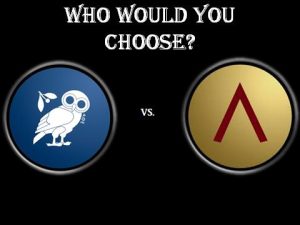 Athens and Sparta are often considered two of the most, if not the most, influential of the ancient Greek civilization; their progress in philosophy, literature and warfare would come to shape much of our idea of ancient Greece. There is no doubt that these civilizations were very influential.  However, it could be argued that they were influential in very different ways.

In fact, a case could be made that almost everything about these city-states was different. Athens was a civilization that rose from the plains and was exposed to the fresh air and the sea. They prided themselves in their discussions of politics and ethics, as well as their impressive contributions in literature and philosophy. Sparta was quite the opposite. A culture fortified in a deep valley, their civilization resembled more of an army encampment rather than a city. They were known for their devotion to military prowess and led a lifestyle that revolved around fighting and the glory of battle.
While Athens and Sparta were both dominant powers in ancient Greece, there existed a legendary rivalry between the two. This antagonism would flourish into The Peloponnesian War, a bloody engagement that would last for decades. Additionally, it is for their fierce rivalry and influence that they have often been the subject of much comparison and analysis. 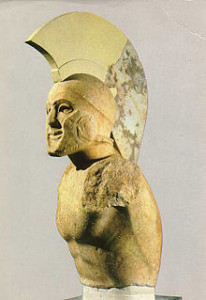 statue of a Spartan warrior

Sparta, also known by its ancient name Lacedaemon in honor of their legendary founder, is often considered to have been the most dominant military presence in ancient Greece. Their infantry soldiers were suppose to have been the most skilled and fearsome warriors of the ancient world. They would owe their eventual victory in the Peloponnesian War to their dedication to warfare, and the ferocity of Spartan warriors would be later embellished in modern films such as 300.

This obsession with fighting was supported by their culture. The Spartan lifestyle, especially that of the Spartan men, was dedicated to learning the art of fighting and the craft of war. At birth, Spartan babies were examined for weaknesses. If they were deemed frail or deformed, they were tossed into a chasm on Mount Taygetos. At a young age the boys would be taken away from their homes and participate in an education system known as Agoge.  In this state mandated training curriculum, young male citizens would be taught how to be a warrior. They were educated in the ways of warfare, fighting as well as reading and writing. They would endure physical hardships and often be submitted to harsh, violent punishments.
This militaristic state was only possible because of the complex societal structure of Sparta. While native born Spartans enjoyed full rights and freedoms, there were others who were not so fortunate. The Perioikoi were a secondary type of Spartan citizen who, although not full citizens and therefore unable to participate in the Agoge training, still enjoyed freedom in the Spartan community. They acted as skilled craftsmen and reserve warriors when needed. 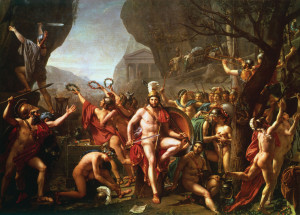 Leonidas at Thermopylae
by. Jacques-Louis David

The Helots were state owned serfs who bordered narrowly on being classified as slaves. The Helots were lower class citizens who were responsible for the agricultural stability of Sparta. It was only through the farming work of the Helots, that the other Spartans were able to free up their time to participate fully in their military training. Even though the Helots were essential to Spartan society, they were also prone to uprisings and would be a constant source of trouble for the Spartan city.
An interesting note about Spartan society was that women enjoyed a level of freedom that was unheard of in the ancient world. Spartan girls were fed the same food as their brothers, and they were not restricted to their homes as was common in Athens. The daughters and sisters of Sparta were allowed to play outdoors and even compete in sports. While it was common in other city-states to marry off girls at the age of 12 or 13, Spartan women tied the knot in their late teens or early twenties. This was done as an effort to spare women the health dangers of pregnancies in adolescents. As a result of their superior diet and bountiful exercise, Spartan women often lived into old age more frequently than in any other part of the ancient world.
Facebook