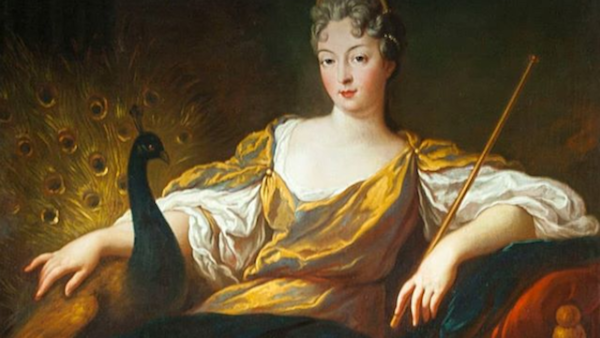 The Tumultuous Tale of Heracles and Hera

Heracles and Hera had a difficult relationship. In fact, the queen of the Gods tremendously hated the half-man known for his strength and hero status, and really went out her way to make his life as difficult as possible. Snubbing Heracles publicly would just not do… Hera wanted to make him suffer.
It all started before Heracles (Hercules in latin) was born. The bastard was the result of one of Zeus’ many affairs, this time with a mortal woman named Alcmene. The God of the sky disguised himself as this poor woman’s husband in order to make love to her and consequently impregnate her. In fact, her actual groom came home later that night, and Alcmene also became pregnant with his son at the same time. (It was technically a case of heteropaternal superfecundation, where a woman carries twins sired by different fathers.)
Zeus’ adultery was the sole reason for Hera’s unending wrath against the unfortunate Heracles. 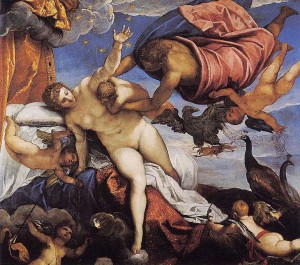 Hera did everything she could to stop Heracles and his brother from even existing. She forced Ilithyia, goddess of childbirth, to sit cross legged, with knotted clothing to hinder their very entry into the world. Hera might have permanently denied the children’s lives if the mother’s servant hadn’t fooled the Goddess of childbirth. The quick witted help convinced Ilithyia that the babies had already been born. Seeing her task as pointless, the goddess jumped up, undid the knots and allowed the birth of the twins to proceed.
After this, Heracles’ mother was worried about Hera… she might enact revenge. So Alcmene exposed her half god child, who was taken up by Athena to see Hera. Zeus’ wife did not recognize her mini-mortal enemy and inadvertently nursed him out of pity. The super strong infant, however, suckled so intensely that Hera pushed him away due to pain. Her milk then sprayed across the sky, forming the Milky Way. Heracles, meanwhile, acquired supernatural powers from the divine milk and was returned to his mother. 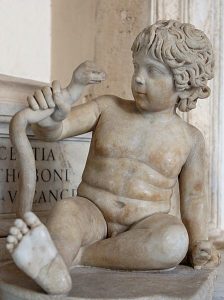 Baby Heracles with the snake

Despite her accidental gift, Hera was still on a warpath. She sent down two enormous serpents to the babies’ crib so she might be rid of them. Unlike his twin brother, Heracles was not afraid, and grabbed the reptiles. His parents found him happily babbling away in baby gibberish, holding the strangled snakes as if they were toys. Heracles’ strength, and partial divinity, was confirmed by the act.
The young boy then grew into a huge, powerful and courageous man that legends are made of. Sure, he killed his music teacher with a lyre, but overall he was destined for greatness. He was prophesied an unusual future, full of vanquishing monsters and making myths.
Heracles then moved to Thebes where he married King Creon‘s daughter, Megara and started a family. Unfortunately at this moment Hera stepped back into Heracles’ life. She drove him so mad that he murdered all of his children, and maybe even his wife as well. After being cured of his temporary insanity, he fled to the Oracle of Delphi to search for a way to expiate his sins. 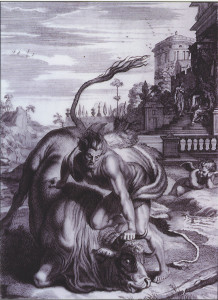 This is an engraving of Hercules performing one of his labors as he forces a bull to the ground. The engraving was created by B. Picart in 1731.

Even this attempt was foiled by his arch enemy, who guided the oracle to punish Heracles further. He was ordered to serve King Eurystheus, a man he knew was lesser than him, and do whatever was asked of him for the following ten years. It was during this time that Heracles completed his famous twelve labors. He was actually only suppose to do ten, but  King Eurystheus cheated him into doing two more. Apparently a few of his miraculous, monster killing acts were not up to scratch because he either received money or help.
Once Heracles was purged of infanticide, he joined a superhero group called the Argonauts. They searched for the Golden Fleece, conquered Troy, fought against the Gigantes and of course, rescued heroines. During one such escapade, Heracles fell in love with Princess Iole of Oechalia, an ancient Greek city. In legend like fashion, her father, King Eurytus, promised his daughter to whomever could win an archery competition against his sons. Heracles promptly triumphed, but the King did not fulfill his promise of giving away his daughter. Instead King Eurytus and all his sons, except one named Iphitus, spurned Heracles. The demi-god then proceeded to kill them all… except Iphitus, who became his best friend.
Enter heartless Hera once more.
She again drove Heracles mad and this time the hefty beast of man threw his greatest pal, Iphitus, over the city wall to his death. And just like the last time, Heracles submitted to servitude as penalty for the killing. 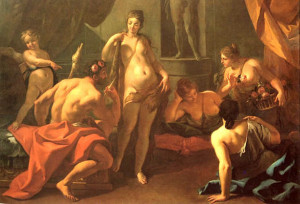 Heracles and Omphale by Sebastiano Ricci

The epitome of all things masculine, Heracles then spent the next three years doing women’s work in women’s clothes. His new master, Queen Omphale of Lydia (modern day Turkey), completed the farce by donning Heracles’ iconic club and lion skin garb. Eventually the queen freed Heracles and married him.
Over the years Heracles continued to have extraordinary adventures. He rescued poor Prometheus from a vulture that ate his liver every day. He killed countless beasts, dragons and monsters. He had a drinking contest with Dionysus and lost. He founded a new nation in Scythia by having relations with a half-woman, half-snake.
In addition to all the warring, Heracles managed to have endless affairs with women and men, fathering countless children and heirs, and thereby passing on his strength and partial divinity. Kings for ages on would boast lineage from the demi-god.
Eventually though, these extramarital affairs were the end of Heracles.
It all happened when Heracles and his third wife, Deianira, tried to cross a river. A centaur named Nessus offered to help the young lady, but then tried to take advantage of her while Heracles was on shore. The mighty warrior was not pleased and swiftly shot the deceitful centaur with a poisoned arrow.
As Nessus lay dying, however, he plotted his revenge. He told Heracles’ wife that she should gather up his blood and spilled semen in order to prevent her husband from being unfaithful. All she had to do was apply his (poisoned) fluids to Heracles’ clothes. 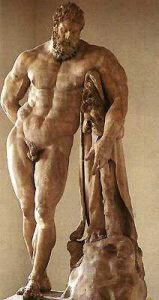 Eventually when Deianira suspected that Heracles was enamored with Iole (the one with the dishonest father), she inadvertently followed through with Nessus’ lethal plan. She soaked Heracles’ clothes in the blood and gave the item to his servant to deliver to him. Heracles put it on and was immediately in torment. The poison burned the flesh from his bones. Heracles then chose to die on a pyre to end his suffering.
After the flames ate away at his mortal body, all that remained was a immortal and divine entity. He then became a full god, joined his father on Mount Olympus and married his fourth and final wife, Hebe.
Heracles was then living upstairs, on the mountain top, with Hera, the goddess who unsuccessfully tried to kill and torture him. Her Herculean efforts to ruin him all failed and in the end Heracles was killed by the trait that Hera hated so much…. infidelity.
“The Tumultuous Tale of Heracles and Hera” was written by Anya Leonard
Facebook