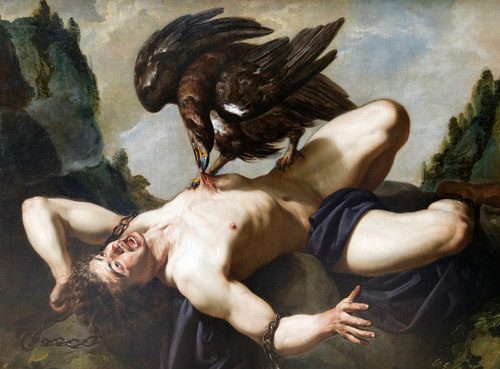 Prometheus The Creation of Man and a History of Enlightenment

The story of Prometheus, Epimetheus and Pandora is a popular myth of ancient Greece. It has been told and retold through the ages with several variations. It is a tale of Prometheus, the son of a titan who was punished for playing his part as the benefactor for mankind. It is a myth that recounts the creation of men and women as well as the birth of enlightenment and the unleashing of misery.
The story goes that during the creation of the universe, the earth formed out of chaos. The air collected and became transparent while the land and seas became solidified and structured. As the earth became suitable for life, the gods decided that it would be wise to bestow upon the planet creatures of life that might thrive and live through the graces of the gods. 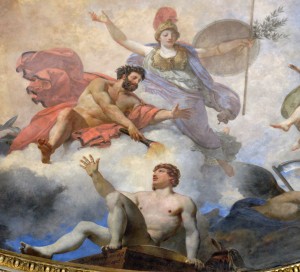 The task of creating man and beasts was awarded to the titan brothers Prometheus and Epimetheus, whom had not been imprisoned with the other titans by Zeus. Prometheus was said to be wise and possessed the gift of foresight and often considered what would be needed several years in the future. Epimetheus was said to be rash and impulsive, unable to plan for the future and instead only cared for what had happened in the past.
The brothers set about creating life upon the earth. Epimetheus swiftly created several creatures that would live in the forests, swim in the seas and rivers, and fly through the air with the gift of flight. Epimetheus was so impulsive that he bestowed upon these creatures several gifts. Swiftness for some beasts, flight for others and the gift of strength and frightening claws for the most terrifying of creatures.
While his brother foolishly crafted creatures with little thought, Prometheus toiled diligently over the creation of man from a lump of clay. Prometheus shaped man after the image of the gods and allowed him to walk upright so that he might look towards the heavens. In some versions it is said that Epimetheus created man and Prometheus merely provided guidance. Regardless of whom the architect was, man was designed to be nobler than any other beast and was constructed so as to resemble the gods.
However upon completion of man, Prometheus discovered that his rash brother had bestowed all the gifts from the gods upon animals and had left none for humans. While the beasts possessed strength, swiftness, hardened shells and warm coats, man was left naked and weak with no means to live prosperously.
Prometheus was overcome with sadness for his creations, whom were living painfully and harshly on earth. Prometheus devised a plan to bestow upon man a great gift that will make them formidable against the beasts of the earth. 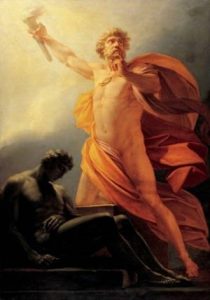 Prometheus defied the will of Zeus and traveled to Mount Olympus and stole fire from the gods, a gift that before was unknown to mankind. Some versions of the story describe how Prometheus was aided by the Goddess Hera. Other stories recall that Zeus stole fire from men and Prometheus took the fire back in defiance of Zeus.
At any rate, fire was bestowed upon mankind by Prometheus and with it came the beginning of civilization. Prometheus taught man how to craft tools from iron ore. He showed them how to plant crops and live through agriculture. Man learnt to craft weapons to defend themselves from wild animals. With fire they learnt to survive cold winters and defy the seasons. With fire man began to thrive and became superior to the animals of the wild.
Zeus was outraged by this transgression. He set in motion plans to punish Prometheus and mankind for their obstruction of the gods’ will. The punishment he devised was twofold.
First, Zeus commanded Hephaestus, the blacksmith for the God’s, to craft a creature so beautiful that it would plague the hearts of men. From a lump of clay, Hephaestus created the form of a woman. This woman was bestowed with gifts like a pleasing voice and unmatched beauty by the gods. They named her Pandora and she was commanded to marry Prometheus’s brother Epimetheus. 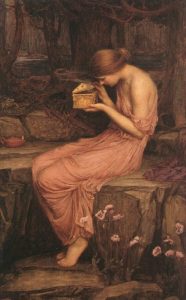 Pandora’s box
Pandora was the first woman, bestowed with beauty and grace. She is described by the Greek poet Hesiod in less than flattering terms when he wrote…

“From her is the race of women and female kind:
of her is the deadly race and tribe of women who
live amongst mortal men to their great trouble,
no helpmates in hateful poverty, but only in wealth.”

Epimetheus married Pandora despite Prometheus’ warnings to be wary of accepting gifts from Zeus. The warning was well placed. Before Pandora departed Olympus she was given a box or, in some versions of a story, a jar. She was warned by the gods to never open the box under any circumstances.
At first Pandora abided by this rule, however her curiosity was soon overwhelmed. She opened the box out of blind curiosity, so that she might see what it held.
Immediately, innumerable evil creatures flew out of the box and began to disperse themselves across the earth. Creatures like disease, famine and plague sprang from the box and began to wander the earth and haunt mankind. Pandora, in her fear, quickly shut the box. She closed the vessel on one last creature before it could escape, Hope.
As a result, it is said that while evil haunts this world, mankind will still have hope. 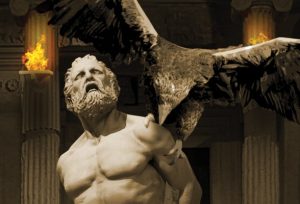 Prometheus was punished as well. He was sentenced by Zeus to spend eternity chained to a mountain where each day an eagle will devour his liver from his body. Prometheus was an immortal, so each night his liver regrew and his wound healed, only so that it may be ripped from his body the next day.
Prometheus spent thousands of years suffering this punishment, having his flesh devoured by a ferocious bird. It is said that he was chained to the mountain for so long that he eventually became one with the rock; all the while he looked on in agony as his creations, mankind, suffer the plagues that were released from Pandora’s box.
Some versions of the myth of Prometheus describe how he was eventually rescued by the hero Heracles. In some versions it is a vulture, not an eagle that feasts on the liver of Prometheus. Regardless of the details, the theme is a powerful one. It is a theme that has been revisited and examined by artists and writers for centuries to come.
Prometheus has often been viewed as a metaphor for human enlightenment and the disasters that can come from overreaching our limits. There are allusions to his legend in several later works of literature. Mary Shelly’s classic 1818 novel Frankenstein is subtitled “The Modern Prometheus”. It has been generally understood that this was done in an attempt to accentuate the theme of scientific progress and the dangers that may come with it.
In the 1937 novel Anthem by Ayn Rand, there are references to Prometheus and the bringing of fire. The novel depicts a dystopian future society which is characterized by being devoid of individualism, emotions or technological advances. The main character defies the laws of the elders and explores the arena of science in secret. He creates a rudimentary light bulb with the intent of sharing it with the world. This character is punished for his defiance of the tyrannical rulers and for his creation of light. After escaping the society, the character renames himself Prometheus, a very obvious tribute to the original benefactor of man.
As can be seen in Anthem, the story of Prometheus can also be viewed as a symbol of defiance of tyranny and authority. Comparisons have been drawn between Prometheus’ defiance of Zeus and the French revolution. His mission of helping humanity despite his own sufferings is often compared to the story of the crucifixion of Christ.
The story of Prometheus remains one of the most popular of the Greek myths. The original creator of man, he sought to help us live plentifully even while he heroically suffered the consequences. He is a reminder that human progress often comes from the selfless actions of others; that, with every advancement, there are often those who accept outrageous sufferings on our behalf.
—
“Prometheus the Creation of Man” was written by Van Bryan
Facebook