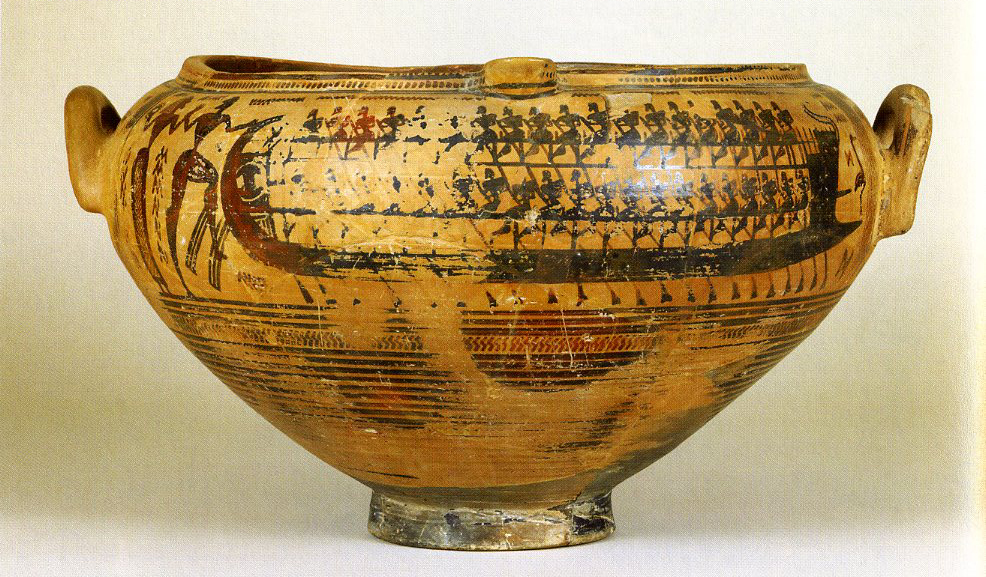 Written by Divya Gupta, Contributing Writer, Classical Wisdom
Greek Vases provide a rare insight into life in Ancient Greece. They reflect the artistic developments, religion, trade, and political beliefs of ancient Greek civilization.
Types of Greek Pottery
Greeks pots were traditionally made using terracotta (fired clay) and were fashioned into different shapes and sizes depending on the intended function. Some of the most common vases were Amphora, Loutrophoros, Krater, Pyxis, Alabastron, and Hydria. Each of the cups had unique shapes that served a different purpose.
The ‘Krater’ pots were used to mix water and wine during the celebrations. It had a voluptuous body and wide opening that allowed the stirring of content. ‘Hydria’ as the name suggests, was used to collect, carry, and pour water. It had a bulbous body and three handles; two for holding and one stretched along the back for supporting and pouring. 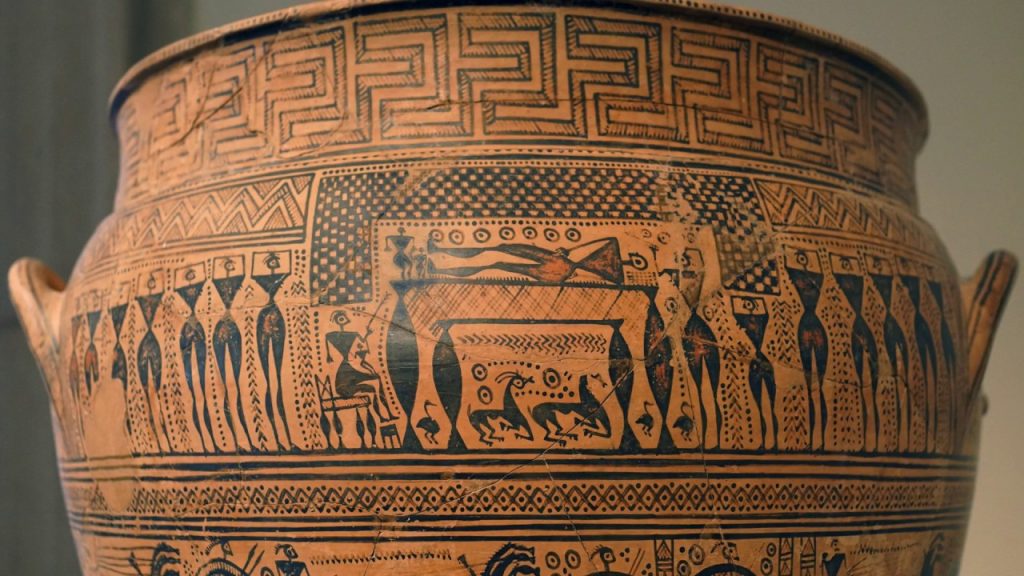 Origin of Amphora Pottery
Amphora is a vase with two elongated handles. Its name is derived from the Greek word amphoreus, meaning ‘carried on both sides’. In ancient times, these were used to store and transport foodstuffs like wine and olive oil. Research shows that these vertically designed vases were adopted from the eastern Mediterranean, which quickly spread throughout the whole world. From Phoenicians to the Romans, every civilization had its own version of pottery which became an important survivor in the archaeological records.
Storytelling and Narrative used in Greek Amphora Pottery
Starting from the Bronze Age, pottery had various styles and sizes but Amphora was the most common ancient pottery shape throughout the ages. Every period had a significant impact on the design and pattern of the pottery. Some Amphora pots were kept plain and were typically used for transportation of liquids, whereas others were highly decorative with red or black figures.
These exterior painting compositions reflected the style of a certain period. For example, vases created during the Geometric Period (900-700 B.C.) had geometric patterns carved on the surface. One of the most famous vessels during this period was Dipylon Amphora made in 750 B.C. which is exhibited in the National Archaeological Museum, Athens. 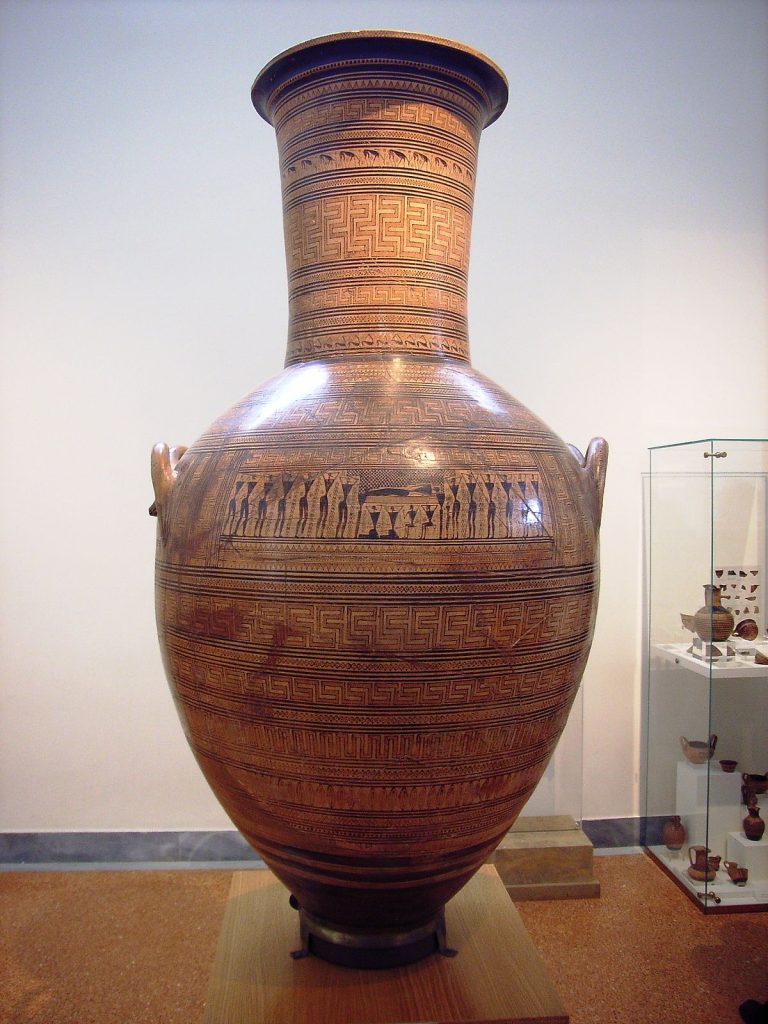 During the Orientalizing Period (700-600 B.C.), the display of animal processions became common. This style took inspiration from Eastern motifs and decorated the vases with intricate patterns completely filling the surface.
During the Classical Periods (600-323 B.C.), vases primarily displayed human and mythological activities. These were scenes varied from everyday mundane activities like (fetching water) to heroic stances (Theseus and the bull), to gods (Zeus abducting Ganymede), to theatrical performances and hunting scenes. These paintings serve as a window to the past to help us understand the lives and beliefs of ancient Greeks over time.
Structure and Shape of Amphora Pots
Amphora pots were generally used as storing and transporting vessels for olives, cereal, oil, and wine. The height of these pots varied from large geometric vases of 5 feet to smaller ones around 8 inches, also called amphoriskoi.
The wine Amphora had a standard measurement for 39 liters or 41 quarts of liquid, these were specially painted to be used as decanters and were given as prizes. The size of the vessels was standardized to enable it to be carried by one or two people with the utmost ease. 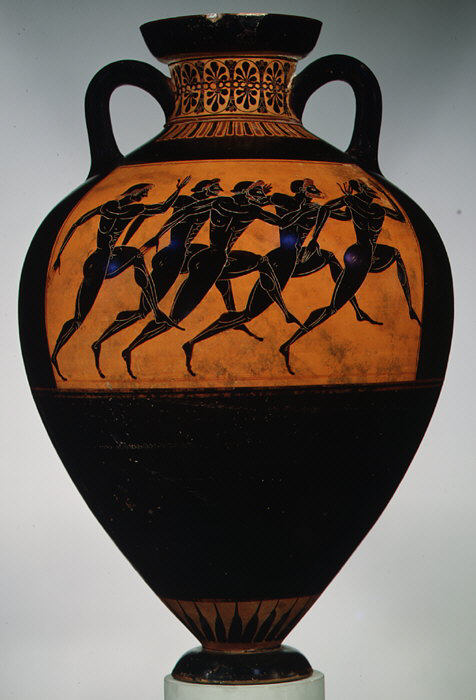 There are two basic types of amphora; the neck amphora, which has a shoulder that joins the neck sharply, and belly amphora that has a suave curve joining the neck to the foot. These shapes were gradually developed to increase the functionality of the pots. With time, these pots became taller and slimmer to facilitate ease of packing and transporting.
With such distinctive pot styles came a plethora of techniques that the Greeks incorporated to achieve stability and strength in the structure. These unique vase shapes consisted of a couple of horizontal sections that were made separately on the pottery wheel and later attached using the score and slip method. The entire body of the vessel was compiled together along with the handle to achieve a sturdy structure.
Many Amphorae that were used for transportation were stamped before firing. These seals had the place of origin (pottery workshop), batch number, the monogram of the manufacturer, and regional symbols embossed on it. In the case of wine, the age of good wine was marked on the containers, and drink-by-date for cheap wines were mentioned. Very similar to the modern-day wine bottles, right?
Resources:
https://www.ancient.eu/Amphora/
https://www.ancient.eu/Greek_Pottery/
https://www.khanacademy.org/humanities/ancient-art-civilizations/greek-art/greek-pottery/a/greek-vase-painting-an-introduction

Posted in Art - No Comments