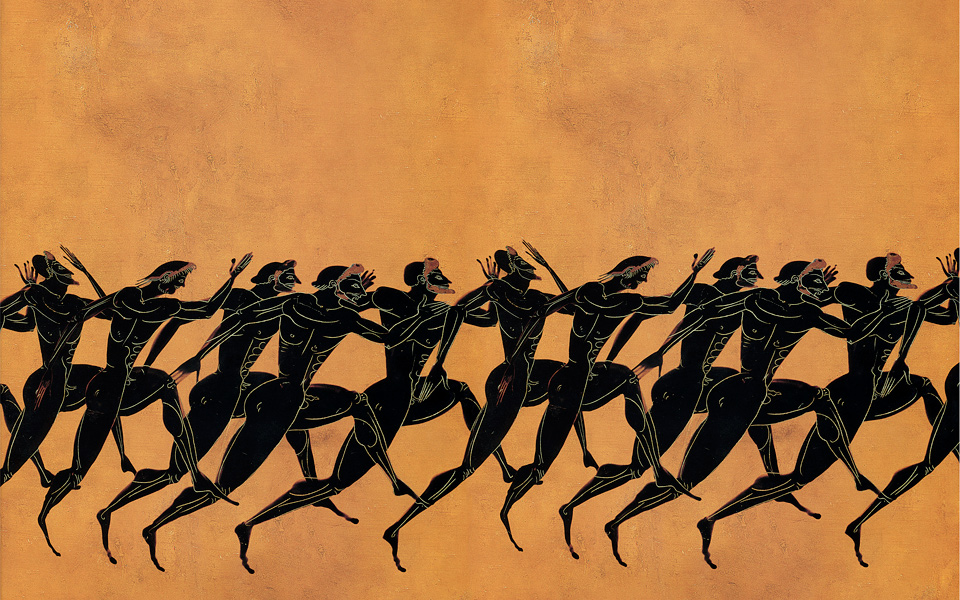 Of Gods and Laurel Trees

Next year, 2020, will be the XXXII Olympiad, and once again the world will be cheering for their most acclaimed athletes. But, have you ever wondered why in ancient Greece the winners of competitions were garnered with Laurel wreaths? Well, herein lies the tale of Daphne…

Playing hard to get?

As appears to be somewhat familiar through ancient Greek myths, the antagonist of this story is Eros, Aphrodite’s son and the god of love. Daphne, a naiad daughter of the river god Peneus and the nymph Creusa, was the unwilling victim of a curse placed by Eros on his uncle, Apollo.
But why would Eros do this? Well, to prove a point, of course. The story goes that Apollo made a rude remark as to Eros’ archery skill. Given that Apollo is the god of archery and sport, his opinion would normally hold great value.
However, in this case, all in love and war must have been fair game. Eros, having taken affront to his uncle’s words also took aim and let loose two arrows; one was lust-laden, with which he shot his nemesis, the other with repulsion, which was directed at Daphne.
Once ‘wounded’ by love, Apollo’s gaze fell upon Daphne and his pursuit began. Daphne, of course, was repulsed in being pursued by the god and ran away. Unfortunately, though, Apollo was not to be dissuaded from his infatuation. He continued to chase her, cornering her near the banks of a river, intent on having her despite her refusal. 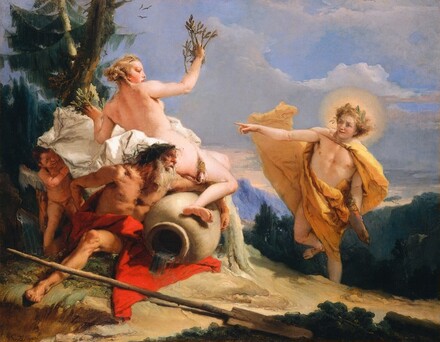 In her desperate state and only seconds away from being raped by Apollo, Daphne prayed to her father, the river god Peneus, to save her. He heard her plea for help, and in a matter of seconds, she was transformed into a laurel tree. Apollo’s rejection and punishment were complete.

Does the story end there? No.
What Eros didn’t know was that Apollo’s love for Daphne did not end, even though she was now an elegant laurel. The god’s attraction to, and reverence of, the tree continued. In fact, Apollo held the laurel in the highest of esteems and above all other trees.
Thus, Apollo made a vow to Daphne, that he would use his eternal youth and immortality to make the laurel tree evergreen, so she would live forever. He also fashioned a wreath from her branches, to wear, so he would forever be in her arms.
This act of creativity turned Daphne into a cultural symbol for him, Apollo, and all other poets and musicians.
In time, when the Pythian Games (one of the four Panhellenic Games) were held at Delphi in honor of Apollo, each victor was garnered with a laurel wreath as their prize. This custom lived on, and as the Olympics took over in popularity of the Pythian Games, the honor of the laurel wreath also continued. 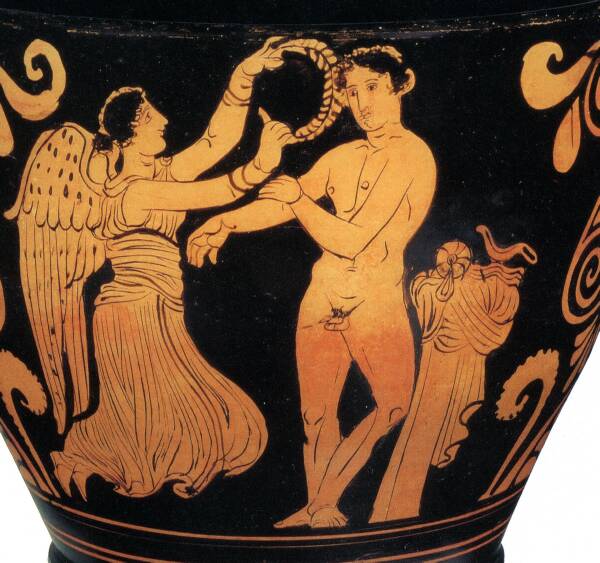 The goddess Nike crowns an athlete, which she has chosen to win the contest. He does not see the goddess and is anointing himself with oil in the dressing room, in preparation of the contest.

Love through the ages

Since those days, nearly a thousand years before Christ, there have been many votives to the memory of Daphne. There have been at least two temples, Artemis Daphnaia in Hypsoi, and Apollo Daphnephoros at Eretria.
There have been several famous artistic renderings of the story, such as  Apollon et Daphne by Rubens, Apollo and Daphne by Waterhouse, and Apollo and Daphne by Pollaiolo.
Plasterwork from the 16th century in England has also portrayed Apollo and Daphne, as has the magnificent marble sculpture, Apollo and Daphne, by Bernini at the Galleria Borghese in Rome. Interestingly, most of these depictions show the moment of Daphne’s transformation.
On a culinary note, laurel is used as a common flavoring for many soups and slow-cooked foods. Most cooks and chefs around the world will be familiar with Laurus nobilis, or Bay leaf, for its sweet and aromatic properties.

Next year, when the opening ceremony starts, spare a thought for Daphne. A woman who was pursued and used her wit and faith to elude capture, and who was rewarded for her tenacity.
As they award each victor of the games, don’t forget Apollo either, a god who was tricked and punished, but who found a way to honor the woman he grew to revere.
It’s not often you hear of a love that endures millenniums, that despite it being unrequited does not turn destructive.
If nothing else, perhaps that’s what we can learn from Daphne’s story: to hold ourselves to high standards, to have faith in those who care for us, and to resist to the best of our ability what would ruin us.
Facebook