Pericles and the Land of the Deadheads | Classical Wisdom Weekly 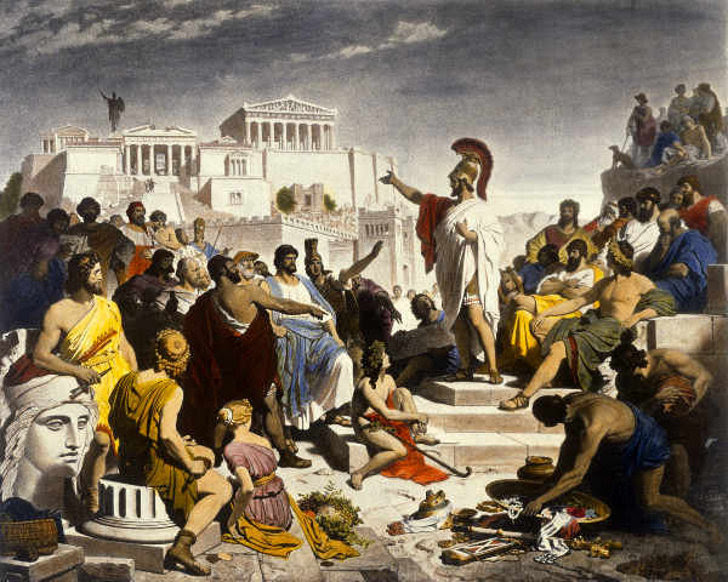 Pericles and the Land of the Deadheads

Pericles: “I Shall Begin With Our Ancestors”
“I shall begin with our ancestors,” said Pericles, in his speech for the dead soldiers. This was 431-430BC, the first year of the Peloponnesian War. The custom was to give a public eulogy – a kind of Thanksgiving and Veterans’ Day rolled into one – each year. “They dwelt in the country without break in the succession from generation to generation, and handed it down free to the present time… And if our remote ancestors deserve praise, much more do our own fathers, who added to their inheritance the empire which we now possess, and spared no pains to be able to leave their acquisitions to the present generation.”

Pericles began honoring the achievements of the nation’s fighting men. An unsentimental historian might wonder what those achievements were worth. Athens, like other city-states, seemed prone to go to war with its neighbors for no particular reason and no particular advantage. Athens was more successful than most and was able to build up its own little empire. Then, it was brought low by plague, treachery, and other empire builders; all the sturm and drang seemed to get it nowhere.
Then, Pericles makes equally dubious remarks about Athens itself. These, too, might have come from the mouth of America’s 43rd president, George W. Bush, if someone would write them out for him in short words. This little insight should put to rest forever the idea of Athens as a center of serious thinking. Pericles was a better humbugger than Bush, but the flatteries were the same. Athens’ government was better than its rivals, he said. Its people were more courageous and better organized. Even its artists flourished in Athens as nowhere else. With such men as this, Athens couldn’t lose.
“You may reflect that it was by courage, sense of duty and a keen feeling of honor in action that men were enabled to win all this…” he continues, on how the empire was put together.
Pericles had urged Athenians to war, just like Bush. But the war did not go well. Twice, the Spartans invaded and laid waste to Athenian lands. A year later, the same people who praised Pericles were at his throat. The great orator held them off – urging them to stay the course. Yes, he pointed out, your lands and houses might have been ruined, but this is a fight for something much more – liberty! “You cannot decline the burdens of empire and still expect to share its honors,” he says.
The Athenians did stay the course; it led them to total defeat. Pericles died of plague.
Pericles: What Thanks Did the Next Generation Owe?
We know what thanks Pericles’ generation owed its predecessors. But what thanks did the next generation of Athenians owe to them? Athens was destroyed. Their parents’ empire building had cost them dearly: their wealth, their independence, even the empire itself.
Twenty-five centuries later, Thanksgiving Days went by without much notice. A few people probably pause before turning to the turkey to thank their dead ancestors. The dead men had worked, and saved, so that their descendants would have life…and have it more abundantly, just like the ‘remote ancestors,’ Pericles recalled. But did anyone stop to wonder about the generation to follow?
We recall Dr. Kurt Richebacher’s comment:

“I grew up in a time when you wanted to save so that your children would have a better life than you had. Now, in all the Anglo-Saxon economies, people don’t seem to want to help the next generation, they want to cheat it, by leaving a legacy of worn-out capital…and debt.”

Each year, America’s dollar declines. Each year, Americans own less of their own national debt… less of their own houses… and less of their own future earnings. Little by little the patrimony of future voters slips away, replaced by obligations. So great has the debt load become that it cannot be settled in a single generation – even if that generation were willing. Instead, the blessings that one generation enjoys are passed onto the next generation as a curse.
A child born in America in 1900 came into the world naked and free of debt. Today, he pops into the world and is immediately swaddled in chains of debts. All his life he will have to pay them – debts from bonuses paid to government employees in 1986… from bombs dropped in 2003… from boondoggles built in 1995… checks written in 1974… promises made to old people in 2002… the expenses of hurricanes in 2005… and so on. The poor child will have to drag around with him the entire pathetic history of America’s financial decline.
‘Stay the course,’ said Bernanke in 2005. ‘We cannot stop now,’ added Bush. “There is more work to be done,” chimes Obama.
“Damned b**tards,” the next generation is likely to grumble.
Pericles and the Land of the Deadheads is by Bill Bonner
Facebook