Ego is Your Enemy

This month we have been occupied with politics- discussing politics, reading The Politics, mourning the state of politics, writing about aforementioned lamentation of politics.
Why do we do this to ourselves?
No answers for certain.
Maybe your editor is a masochist. If you’re a long-time sufferer of our scribblings, then that also makes us a sadist.
This week, we continued the self-flagellation of our soul and listened to the vice presidential debate here in the States.
“So… this won’t be like the last one, right?” our girlfriend inquires with us. “These guys are like…normal people…right?”
We hate to be the one to break it to her, but figure she’s got to learn sooner or later.
“No, honey. They’re not normal people. They’re politicians.”
The Big ‘So What?’
This week, we turn away from politics, cross our fingers, and hope that the demos (people) don’t ruin the polis (State) while our back is turned.
But that isn’t to say that we aren’t talking about important stuff. Far from it!
Before putting any ink to parchment (digital ink on digital parchment, mind you) your editor always considers what we have affectionately dubbed “the big ‘so what?’”
Why should you care? Will reading this week’s newsletter make our subscribers better, smarter, more introspective people?
Or will their eyes glaze over as soon as the edition hits the inbox?
I once had a fellow university student ask me if he could contribute to our weekly mailings. He wanted to submit part of his term paper that focused on the plausibility of the Aristotelian understanding of sense organs.
“Needs more applicability,” we told him.
“Applicability? Never heard of that philosopher.”
You get the point…
The biggest hurdle your editor faces, since our beat is the ancient classics, is contending with the big ‘so what?’ Most people assume that the wisdom of classical antiquity is just that…antiquated.
The classics, most assume, might be right at home in a smoking parlor where Reginald and Irving sew elbow patches on their tweed jackets and pontificate through billowing clouds of pipe smoke.
(Click here to read our previous writings on the fictional Reginald and Irving)
But what of the hearts and minds of those of us here in the real world? The mortgage payer? The soccer mom? The entrepreneur with the scrappy young startup?
Is there room in their lives for the classics?
We think so… and we’re not the only ones.
Ego Is The Enemy
Your editor keeps busy most days, but we put aside some time this week to crack open Ego Is the Enemy, a new book from the New York Time’s bestselling author, and occasional Classical Wisdom contributor, Ryan Holiday.
If you caught that classical reference at the end, there’s a reason for it. As Ryan puts it, “Like my other books, this one is deeply influenced by Stoic philosophy and indeed all the great classical thinkers.”
Ryan’s a man after our own heart- a writer who uses the wisdom of antiquity to inspire and cultivate the life of the modern citizen.
Most good ideas are old ideas, and the idea that our ego is the enemy is not just old…it’s ancient!
Hate Those Who Flatter
Ego Is The Enemy opens the first chapter by mentioning the ancient essayist and philosopher, Isocrates.
Thanks, Ryan. We’ll take it from here.
Letter to Demonicus, as the piece is known, is brief by ancient standards. You could read the whole shebang in a few minutes. All the same, the letter is filled with practical advice intended to arm the young man for the years ahead.
Isocrates warns Demonicus to “Hate those who flatter as much as those who deceive, for both, if trusted, injure those who trust them.” And that a young man of noble stock should, “Consider that propriety, a sense of shame, justice, and self-control, especially become you; for by all these a young man’s character seems to be adorned.”
Isocrates, in essence, is urging Demonicus to follow the precepts of goodness that would be later propounded by the likes of Socrates and Plato.
Plato believed that the soul was like a chariot, pulled along by two wild horses. The horses represented our desires, both noble and ignoble, and it is only through the skill of a veteran charioteer (wisdom) that we are able to control the direction of the chariot and avoid catastrophe by letting our desires run rampant. 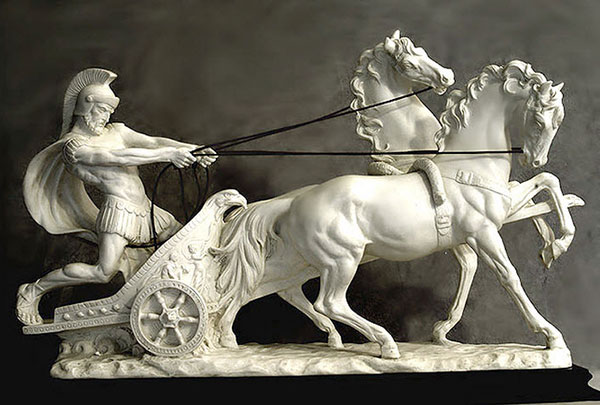 An ego, left unchecked, has the tendency to lead to disaster and ruin. It is only through the skilled hand of virtue, wisdom, and modesty, that we are able to properly engage our soul in the necessary duties of life.
Ego, as Holiday puts it, is indeed the enemy.
The Internet Has Made You Ignoble
We usually propose that lessons from antiquity are just as important now as they were thousands of years ago. Today’s particular missive is unique in that it’s not just as important, it’s more important now than it’s ever been.
“Isocrates warns Demonicus to ‘Hate those who flatter as much as those who deceive, for both, if trusted, injure those who trust them.'”
It has never been easier than it is today to indulge in self-aggrandizement. As Holiday puts it, “Now, more than ever, our culture fans the flames of ego.”
We stick out our chest; share our perspective on social media outlets with the assumption that our opinions innately matter. Young people are taught that they, by their mere existence, are special. We are told to follow our dreams and that success is all but guaranteed.
Your editor, anecdotally, has observed old friends sink into depression or mania when the realities of the world come crashing down. They are not rock gods or movie stars by the age of 27 and are therefore cheated out of the future they were promised.
The ego has run amok. The horses have slipped the reins. The charioteer is asleep at the wheel.
If ego is the enemy, then wisdom and modesty are your allies. Our classical forbearers knew this lesson well. Socrates said…
Cultivate virtue and wisdom. Learn to, as Isocrates says, “hate flatterers”, and that includes the flatterer within all of us.
Facebook