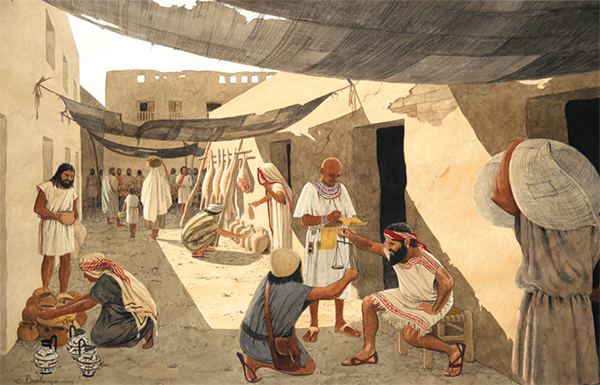 International Trade in the Ancient World

By Edward Whelan, Contributing Writer, Classical Wisodm
We are all aware of the great achievements of the Greeks and the Romans. However, they were also great traders and they helped to establish an international trade network that changed the world.
The Early International Trade Network
After the Bronze Age collapse caused by the invasions of the Sea Peoples, the international trade system was in disarray. It was the Phoenicians, based in what is now Lebanon, that revived trade. They bought metals from as far as Spain and also traded luxury goods. Their colony of Carthage helped to create a pan-Mediterranean trade network.
The Greeks competed with the Phoenicians, especially after they established many colonies in the 8th century BC. In particular, they controlled the trade with the Black Sea. City-states such as Athens grew wealthy from this trade and they exported manufactured goods, such as vases, far and wide.
By the 4th century BC, many parts of the Mediterranean traded with each other. They exchanged mainly luxury goods, such as wine, but also metals and grains. Olive oil and wine was also traded over vast distances and they were stored in amphorae. Most international trade was undertaken by oared galleys because land travel was too slow and dangerous. 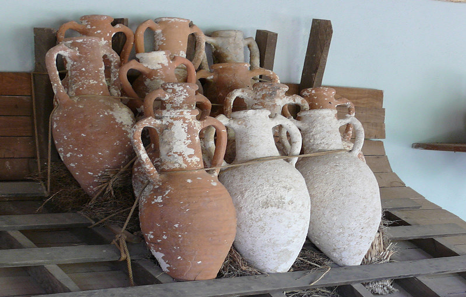 A collection amphorae retrieved from a shipwreck

The Hellenistic Age
The conquest of the Persian Empire by Alexander the Great unsurprisingly had a huge impact on the known world. It also transformed international trade. Asia was opened up to Greek traders and they collaborated with local merchants, creating a vast international economy. Macedonian colonists in Egypt and Asia maintained their traditional way of life, demanding goods from the Greek mainland, and this stimulated commerce across borders.
Alexander founded many cities on trade routes, as was particularly the case in Bactria and Syria. These cities helped to greatly expanded commerce and as a result grew fabulously rich.
Meanwhile, the Hellenistic kingdoms of the Seleucids and the Ptolemies helped to link the Indian subcontinent with the Mediterranean. The Seleucids traded with the Mauryan Indian kingdom and the Ptolemies also traded with India, using an Indian Ocean sea route. Moreover, the Ptolemies established stations on the east coast of Africa in order to obtain war elephants and they gradually became trading posts as well.
The Roman Empire and International Trade
From an early date Rome was an important trading center, especially in salt. As Rome conquered Italy over the centuries, it built roads and fostered trade, and when the Roman Republic acquired territories outside Italy, it established colonies of merchants. After the defeat of Carthage in the Third Punic War, it dominated long-distance trade.

The first two centuries of the Roman Republic were times of peace and prosperity, and the various provinces of the Empire traded with each other. The Romans were very interested in international trade; they received much of its grain from North Africa and exported luxury items, such as wine, to provinces such as Britain. After Augustus annexed Egypt he promoted policies that greatly benefitted local merchants, such as building a port on the Red Sea coast.
Soon there were many more ships traveling to India during the Monsoon season when the winds were favorable. The Romans traded extensively with the Indo-Scythians and later the Kushan Empire, typically buying rare Indian goods, such as spices with coins.
During these voyages, the ships would visit Arabia and soon the Romans traded with ports in the area as well. Indeed, Augustus considered invading Arabia Felix (modern Yemen) which was fabulously rich from its trade in Frankincense.
The Romans also traded on the east coast of Africa. Again, they followed the precedent of the Ptolemies, trading with African communities on the Indian Ocean coast. The Romans received slaves, ivory and tortoise shells from the kingdom of Aksum (Eretria and Ethiopia). It is believed that Roman ships traveling from ports in Egypt reached as far south as modern Tanzania.
Roman merchants also traded with the Germanic tribes, but only during periods of peace. 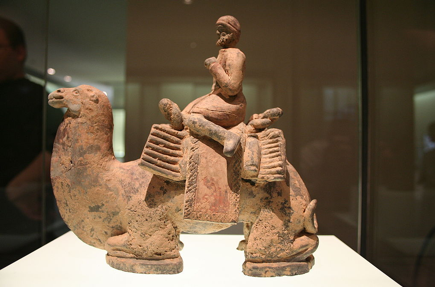 A Silk Road trader on a camel

The Silk Road
By the 1st century BC, the Han Chinese Empire had expanded into Central Asia, allowing them to trade with the Kushan and the Parthian Empire. The Silk Road was a network of mainland routes that connected China and South-East Asia with West Asia. As the Silk Road grew, Rome was able to trade indirectly with China, through intermediaries. The goods were mainly moved on the back of camels that made the long and dangerous journey. However, a maritime route was later established from a Chinese controlled port in Vietnam to Roman Egypt.
An especially popular import from the far East was Chinese silks. In fact, the Senate tried to ban the wearing of silk because it was deemed immoral. Nonetheless, many Roman ladies wore skimpy silk dresses to the horror of the Senators.
Greek and Roman Merchant Class
In ancient Greece, international trade was in the hands of merchants known as emporoi who often worked in large associations, and were also often ship owners. There is some evidence that there were Roman merchant guilds as in Medieval Europe and they engaged in international trade. Negotiatores were wealthy merchants who bought goods in bulk and sold them to small traders. They often became very rich and could also act as bankers; only they could finance trade missions to India and elsewhere.
Much of the international trade was dominated by plebeians or former slaves, as members of the elite could not engage in trade by law. However, they were probably investors in commercial ventures. The growth of transnational commercial networks resulted in the development of new financial techniques, and even basic accounting, in the Classical era.

Greek merchants from an amphorae

The Decline of International Trade
The Roman Empire had a massive trade deficit because of its insatiable hunger for luxury goods. This led to a shortage of coinage in the 3rd century AD, and this is often seen as one of the reasons for the fall of the Roman Empire. At the same time, China had fragmented into a number of kingdoms, losing control over Central Asia. The Silk Road became less secure and trade declined. Rome’s economy almost collapsed in the 5th century and trade with India was also much reduced. When the Germanic invasions led to the fall of the Western Roman Empire, international trade collapsed. However, the Eastern Roman Empire continued to trade with its neighbors, including China via the Silk Road, after the fall of Rome.
Facebook