It easily falls into the ‘conspiracy’ category – but that doesn’t mean it isn’t a fun story to tell.
We are all taught that empires rise and fall and that every new beginning comes from some other beginning’s end. Ancient Greece and Ancient Egypt were no exception. The year was 1336 BC and the Egyptian Pharaoh, Akhenaten, had just died.
Akhenaten was a strange Pharaoh who shook many of the essential foundations of Ancient Egyptian culture. For one thing, Akhenaten was a monotheist. He only believed in Aten, a Ra-like sun God, a fact that drives some scholars to debate whether he is a founding father of judaism. 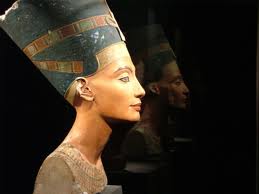 Akhenaten was also a romantic, conferring unusual, elevated status to his wife, the famed beauty Nefertiti. He also may have had a strange syndrome or disability which he passed on to his children… something that may have resulted in the early death of his son, Tutankhamun or King Tut.
One the strangest things about Akhenaten though, was that he changed the way art was done in those ancient days. He shunned the rigid rules that maintained 3000 years of artistic stability. Depictions became more naturalistic, especially of plants, animals and commoners. They showed a sense of movement and action. 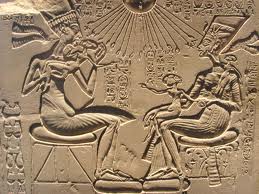 Akhenaten with his wife and children

The royals too were depicted differently. Instead of showing the Pharaoh as god-like, immobile and eternal, the artists began producing tender images of him. He is drawn playing with his daughters beneath the rays of the Aten, while showing his wife affection. The lines surrounding the king are soft and curved. The hard straight features of the previous pharaohs are banished.
But then Akhenaten, the man who is considered “the first individual in history”, died.
Change at first was gradual, but eventually all the reformations faded away and returned to the previous, traditional way of doing things. The time referred to as the ‘Amarna period’ came to an end.
But what happened to all those artists who had just tasted creative freedom? The return to regulation meant the end of artistic liberalism. Did they stay in Egypt after the reversion to the mean? Or did they, perhaps, make their way up north, across the mediterranean?
Around this time, we start to see, for instance, the emergence of Etruscan hieroglyphics, in the land of the Minoans, a pre-Greek civilization.
Eventually, around 750 BC, we come to ‘Archaic’ Early Greek Art.
This time period is characterized by statues that are free standing, frontal and solid. They wear the strange, so-called archaic smile. One foot is placed forward, the fists are clenched. There are three types of figures, the standing nude youth (kouros), the standing draped girl (kore), and the seated woman. All of the different types of sculptures emphasize and generalize the essential features of the human figure.
Now these Greek statues look a lot like the Ancient Egyptian statues. 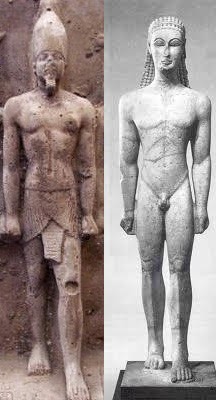 Ancient Egyptian on the Left, Ancient Greek on the Right

Of course this story of runaway sculptors, bringing an artistic renaissance and revolution to Ancient Greece, has a lot of holes. The time periods, for instance, are vastly contradictory. It is difficult to imagine keeping this new artistic approach alive for 500 years. The Ancient Greek Kouros also look more like the traditional Ancient Egyptian art, rather than the unique Akhenaten style.
So why did Ancient Egyptian-like statues start emerging in Ancient Greece? Could this just be a coincidence?
We, unfortunately, do not know. They are many other potential explanations, such as the Achaemenid Persian Empire, which was founded in the 6th century BC by Cyrus the Great. This huge empire, which encompassed approximately 8 million km and spanned three continents, would have brought Egypt and northern Greece, Macedonia, under the same umbrella.
The Achaemenid Persian empire also instituted infrastructures, such as road networks, a postal system, and an official language throughout its territories. It even had a bureaucratic administration which was centralized under the Emperor, as well as a large, professional army and civil services.
Maybe the famous Egyptian memorials made their way on these new found roads to Greece’s fledging shores. It is, after all, in this time period when the first Archaic sculptures start to appear.
Or maybe not. History is not an exact science. Dots that seem important might only stick out with hindsight, and connections between them weakened by improbabilities. All we do know, is that Early Greek art starts getting even more interesting from here on out.
—
“Walk Like an Egyptian: Early Greek Art” was written by Anya Leonard
Facebook