The Arc of Deucalion

By Nicole Saldarriaga
Name this man: when warned that the earth and all its inhabitants would be destroyed by an enormous flood, he—the only pious man worth saving—and his wife built an ark, in which they both survived the flood. After the waters receded, and once the ark had come aground on the top of a mountain, he and his wife gave thanks for their salvation and proceeded to repopulate the earth.
If you guessed the biblical Noah, then you’re only half wrong. The description above could in fact be perceived as a rough sketch of Noah’s story, found in the first book of the Bible, but in this case I’m not talking about Noah—I’m talking about Deucalion. 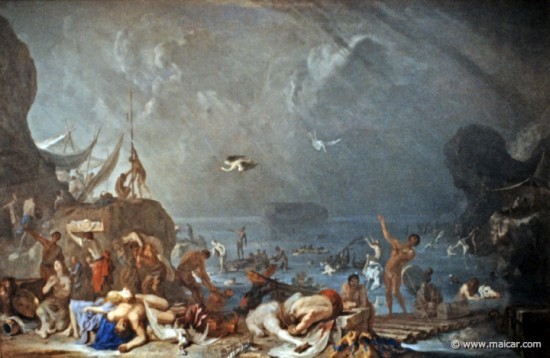 Deucalion was surviving divine floods before it was cool
Let’s backtrack a little. Creation myths are, as the name suggests, largely symbolic stories that narrate the creation of the world and the human species. Almost every culture has its own version of an ancient creation myth (some taken more seriously than others). Ancient Greek culture in particular has several creation myths with which we are relatively familiar, thanks to middle-school “Social Studies” lessons about the Greek pantheon (not to mention popular culture, and/or newsletters like this one!).
Deucalion has a major role to play in the creation myths of Ancient Greece, but before we can talk about his contribution, we need to briefly take a look at his father, the much more famous Prometheus.
The Benefactor of Mankind
Prometheus is known in the myths (many of which are preserved in texts such as Hesiod’s Theogeny and Ovid’s Metamorphoses) as the creator of mankind. Though the details vary across sources, it is generally agreed upon that Prometheus, though he was a Titan, was not punished by the Olympian gods (Zeus, etc.) after they seized
If you guessed the biblical Noah, then you’re only half wrong….
power because he (and his brother, Epimetheus) had chosen not to fight in the war between the Titans and Olympians.
Zeus then gave the two brothers the task of populating the Earth. Epimetheus created the animals, happily (and somewhat recklessly) endowing them with gifts like swiftness, hard shells, claws, and more—in fact, by the time Prometheus had finished forming man out of clay, there were no gifts left to give him. Seeing that this was the case, Prometheus decided to fashion man in the image of the gods—he gave man the ability to walk upright, so that he could keep his gaze on the heavens, he gave man the gift of reason, and (this is, of course, the gift for which Prometheus is most famous) gave man the gift of fire, without which mankind could never have survived. 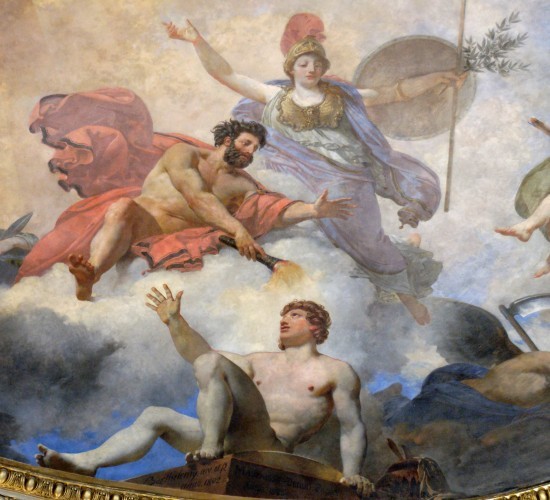 Prometheus giving the gift of fire
Some sources say that Zeus had already taken fire away from mankind, and that Prometheus stole it back, or that Zeus had never wanted humans to have fire in the first place—either way, Prometheus defied him, and was horrifically punished: he was chained to a rock, where he would be defenseless against the eagle that slowly picked out and ate his liver over the course of the day. At night, his liver would grow back, and in the morning the whole grisly process would start again.
So, thanks to the valiant Prometheus, man was made out of clay and, with the gift of fire, was able to grow and flourish and form civilization—but, so the legend goes, mankind also began to quickly fall into a state of utter depravity. Zeus (never a fan of humankind to begin with) was appalled by their behavior, and by the time Lycaon, the king of Arcadia (in an effort to test whether Zeus was really omniscient) killed his own young son and served the boy’s cooked flesh to the god at a banquet, Zeus’ patience had already worn thin. Enraged by Lycaon’s degenerate actions, Zeus made the decision to destroy all of mankind.
After all, why bother throwing out the bad apples when you can just as easily burn the whole orchard?!
I Never Liked Those Human Anyway…

According to Ovid, Zeus almost destroyed humankind by barraging the Earth with lightning bolts, but stopped when he realized that the resulting fire would probably destroy all of creation. Instead, he chose a punishment that would wipe out the humans, without causing much permanent damage to the earth itself: a flood.
He and Poseidon worked together to create a sudden and massively destructive flood, with Zeus controlling the storm clouds and Poseidon commanding the rivers and oceans to overflow. The entire ordeal lasted about nine days, and by the time the waters receded, all of mankind had drowned.

All, that is, except one married couple: Deucalion and his wife, Pyrrha. Some sources say that, because of Deucalion’s piety and loyalty to the gods, he was warned (either by his father or by one of the Olympian gods) about the flood, and told to build a sturdy ark. Other sources (like the Metamorphoses) imply that Deucalion and his wife simply got lucky, managed to find a boat, and were allowed to live because they humbly gave thanks to the gods for their survival.
Their little boat ran aground on the only dry spot on earth: the very top of Mount Parnassus (though the mountain differs from source to source). As the waters receded and the elderly couple abandoned the boat, they were suddenly faced with the daunting realization that it would be their job to repopulate the earth.
Understandably terrified by this prospect, they decided to ask the “goddess of prophecy,” Themis, for advice. They travelled to the site of her oracle and prayed for guidance. Moved by their piety, Themis gave them this divine message:
After a few moments of confusion (in which Deucalion and Pyrrha were rather shocked at the unholy prospect of disrespecting their mothers’ bones), they realized that Themis meant their common mother, Mother Earth. Deucalion reasoned that the bones of Mother Earth must be the stones on the ground, and so they followed the divine advice and threw stones over their shoulders. All the stones thrown by Deucalion transformed into men, and all the stones thrown by Pyrrha transformed into women; and so, says Ovid,
In this way, Deucalion and Pyrrah were able to repopulate the earth—and, even in their old age, they were also blessed with their own children, many of which came to be regarded as extremely important in the creation myths of Greece. In fact, one of their children, a boy named Hellen, is considered the mythical ancestor of the entire Greek race, and is the origin of the demonym, “Hellenes,” by which the Greek people are still known.
Facebook