The Fall of Jerusalem (Part 1)

By Ben Potter
It is known as primum populi Romani bellum in Iudaeos to the Romans, ha-Mered Ha-Gadol to the Jews, and The Great Revolt to the romantically inclined. However, this brutal and bloody conflict is best and most easily known to most as the First Jewish-Roman War (66-73AD), and is yet another war on an ever-expanding list that proved Rome was no flash in the pan, boom and bust, Alexander the Great style of empire, but one that was here to conquer, to rule, to dominate and to endure.

Depiction of the Roman Triumph celebrating the Sack of Jerusalem
However, there was something different about this conflict—something that made Rome, for a while at least, look like she may have bitten off more than she could chew; this was no ordinary war, this was a holy war… well, for some at least.
Of course, Rome had come up against plenty of dedicated and devout people during her inexorable conquest of the known world, but these had all been broadly pagan, polytheistic or invested in the veneration of a living mortal. Militant monotheists with a mandate from the Almighty to protect a land that was not merely their home, but a sacrosanct and sanctified space, were a new kettle of fish – and history bludgeoningly tells us, again and again, that people who are willing to fight for a cause greater than themselves are not those that one would wish to meet on the battlefield.
However, like a mohel at a baby-shower, we’re getting ahead of ourselves.
Yes, THAT King Herod
The complicated origins of this titanic tussle for the Jewish (and burgeoningly Christian) holy land date back a couple of generations prior to the outbreak of hostilities in 66AD. Indeed, the source of this tension can be traced back to a controversial figure who, at the time, was perhaps the most important man in the history of Judea, one whose acts and deeds have often been crassly misinterpreted or blurred into a peculiar religious mythology. We are, of course, talking about the King of the Jews himself… Herod the Great. 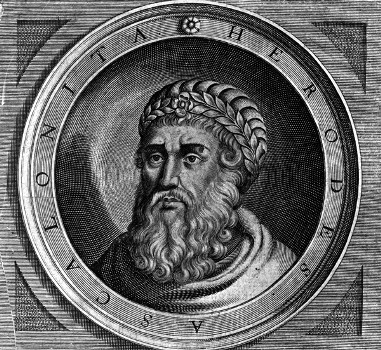 Herod The Great
We remember Herod (ruled Judea 37-04 BC) from Sunday school as the infanticidal antagonist of the Nativity story. While there is no reliable evidence for this cull of the innocents, it does fit in rather neatly with what we know about the character of this mega-lo-maniacal client-king of the Romans.
To consolidate his own power, Herod ruthlessly murdered rival claimants to the throne (including family members); a smart idea to keep oneself in power, but not so shrewd when it comes to the long-term stability of a dynasty. This
“…and history bludgeoningly tells us, again and again, that people who are willing to fight for a cause greater than themselves are not those that one would wish to meet on the battlefield.”
bloodthirstiness, as well as his toleration and support for non-Jews, his perceived bias for the Jewish diaspora, high taxes, and the fact that he was a convert, not a born Jew, meant that the Jewish population of Judea began to strongly resent Herod and, at the time of his death, needed little encouragement to turn their discontent into open rebellion.
This manifested itself in the form of an uprising led by the (capital ‘z’) Zealot, Judas of Galilee, in 6AD. This was in direct response to another bible class staple, the Census of Quirinius – itself a result of the fact that Rome had assimilated Judea into its empire in the same year, ending the small amount of autonomy it had as a vassal.
As the decades progressed, it became clear that the fragility of the empire’s newfound multiculturalism was in danger of being exposed. This was true across the Eastern Mediterranean as several provinces, particularly Egypt, struggled with the conflicting realities of being under Roman law, enjoying Greek culture and juggling elements of the pagan and Jewish faiths as well as the quasi-divine worship of the emperor.
That religious sensitivities could easily boil over into open violence was recognised even by the mad, bad, and dangerous Emperor Caligula (ruled 37-41AD) who, unhappy he wasn’t receiving due veneration from his Hebrew subjects, wanted to erect a huge statue of himself inside the Temple of Jerusalem, but was finally convinced to shelve this particular piece of blasphemous and incendiary narcissism.
Various small riots and scuffles marked the decades preceding the conflict, to find out what finally set the tinder-box ablaze, we have to turn to the pages of Josephus.
The Spark For War…
Josephus, a Jewish solider turned scribe, is one of our best sources for goings on in the region 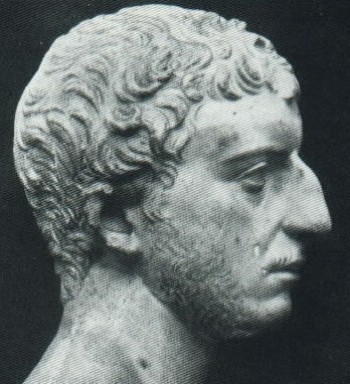 Josephus
in the first century AD and, as such, is a key figure in corroborating the life and crucifixion of Jesus (as well as the stoning of Jesus’ brother, James). Much like Polybius centuries before, Josephus, though taken prisoner by the Romans, quickly showed the worth of his intellect and connections and was soon granted his freedom and used by the Romans as a tactical ally and go-between during the war.
That he was taken prisoner at all is either a stroke of fate or a mark of the scholar’s cunning as, being trapped in a cave with forty of his comrades, they opted to assist each other in suicide rather than surrender to the Romans. They did this by stabbing every third man in a circle – some scholars suggest that Josephus may have made a swift and brilliant mental calculation in order to avoid his own death.
Now, back to the aforementioned spark. Josephus tells us that it started when some Greeks deliberately antagonized Jews by making sacrifices outside a synagogue, thus shrouding it in ritual pollution. The historian states that, although there were Jewish factions baying for blood,
The unrest escalated with the Jews feeling increasingly unhappy about their tax burden as well as their duty to make prayers and sacrifices to the Emperor. Therefore it couldn’t have come as a surprise that some Roman citizens were assaulted and Florus was openly disrespected. Though some reaction would have been expected, the procurator’s drastic response was a shock to many:
However, this extremist barbarity only galvanised the Jews, who had, until then, been deeply divided as to how to deal with the Romans. First Jerusalem, then wider Judea as a whole, broke out in open revolt against their occupiers and oppressors.
The war had begun.
Continue reading here.
Facebook