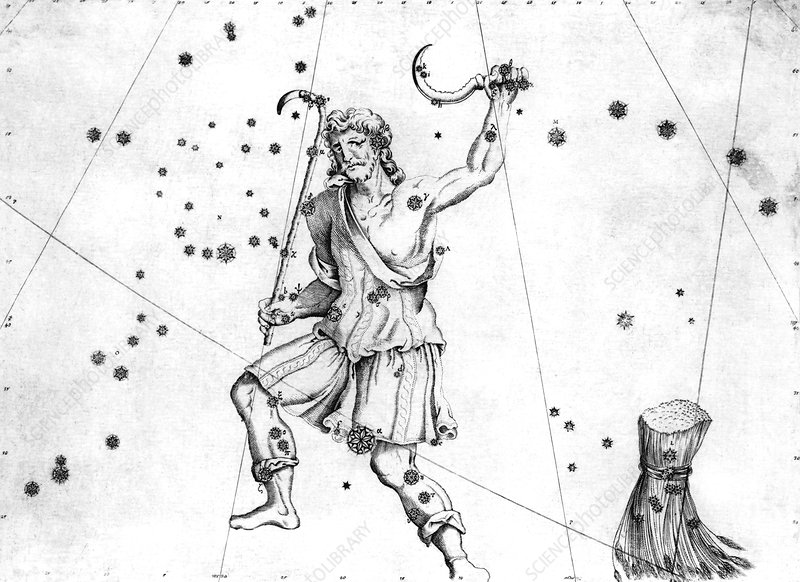 The Herdsman of the Stars

By Danielle Alexander, Contributing Writer, Classical Wisdom
Even to the modern mind, the starry abyss above us encourages a sense of awe and wonder. In the ancient times, they linked their mythos to the heavens and told tales of how the star clusters, or constellations, came to be.
One of these constellations of the Northern Hemisphere, Boötes, can be seen culminating in the midnight sky around May 1st. It is easily identifiable due to the housing fourth brightest star in the sky, Arcturus, located at the mans’ knee. This star was observed from the time of Hesiod (8th century BC) and was so called due to its constant pursuing of the Ursa Major and Ursa Minor constellations. Naturally, this is not the only story connected to this set of stars.
Ancient Greek Astronomy
There are 88 officially recognized constellations, according to the International Astronomical Union, and most of these have been documented since 150 A.D, by Ptolemy in his The Almagest. Ptolemy was drawing information from thousands of years of astronomical observations.
The Greeks absorbed the astronomy and mythology from their older neighbours, the Mesopotamians, Persians, and Egyptians, during the 6th century BC. The Mesopotamians had all of their constellations recorded between 1300-1000 B.C, making some of the information we have today over 3,000 years old! 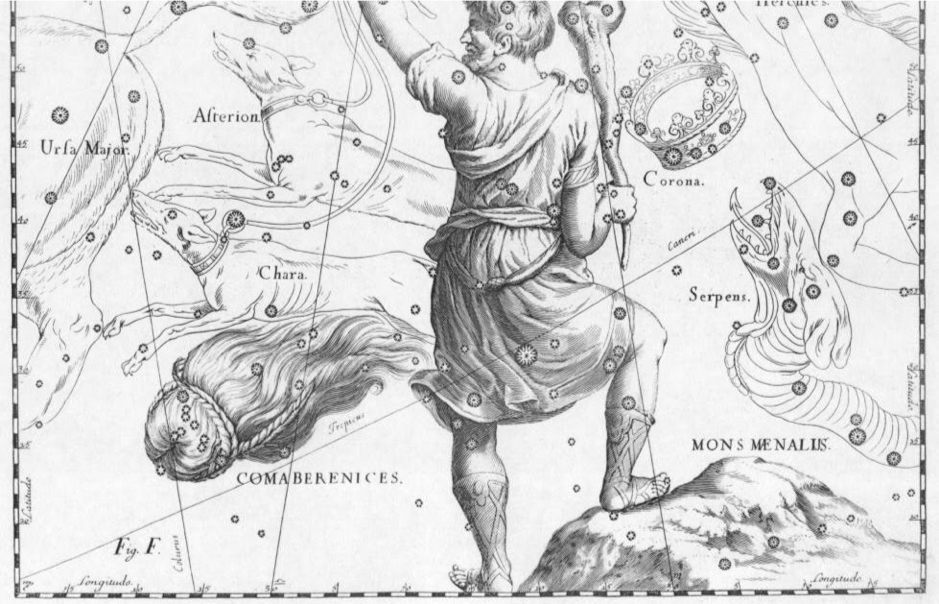 The oldest sources for Greek astrology can be found in the eighth century B.C epics of Homer and Hesiod, with both mentioning two prominent constellations (Orion and the Great Bear), two-star clusters (the Pleiades and the Hyades), and two stars (Sirius and Arcturus) – but nothing more.  It was later when Eratosthenes, a Greek academic based at the Library of Alexandria, unintentionally created the canon of the astral mythos most commonly recognized today, and undoubtedly some of his tales originate from much older skies.
For the ancients, the stars aided in navigation, and the tracking of time, and constellation movements were likely noted after following the movements and phases of the moon. Not unlike modern humans, the twinkling abyss sparked their imagination, and the star clusters had legendary tales of mythic figures attached to them.
Muddled Mythos
Like all the mythos concerning the stars, this story is not straightforward.
One of the known tales for this links Boötes to Icarius. Dionysus taught the Athenian herdsman the art of winemaking, which proved fatal for the herder. He shared his new talent with fellow herdsman, and due to failing to dilute the drink, was torn apart in an intoxicated frenzy when his companions believed themselves bewitched by powerful spells. 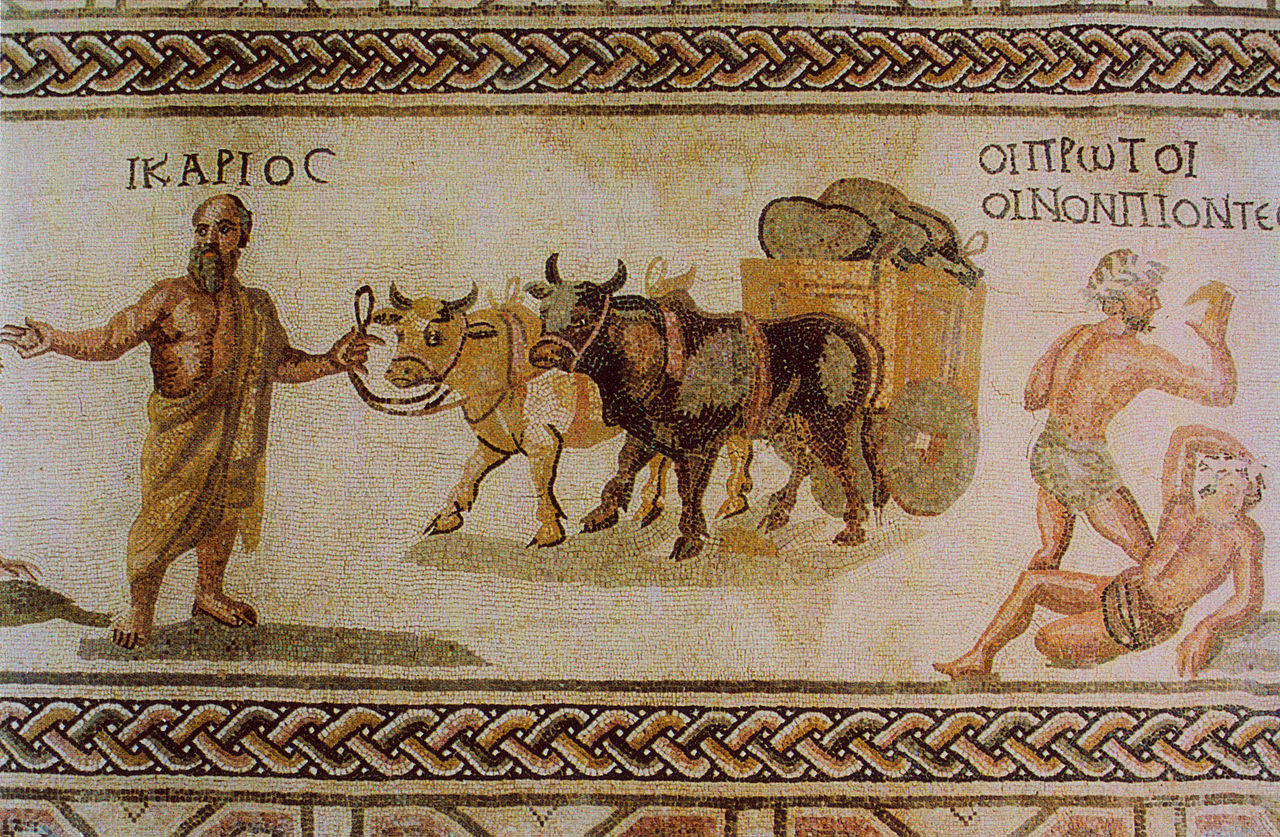 His body lay torn, buried beneath a pine-tree. His daughter, Erigone, with the aid of her dog Maera, recovered her father’s body but was so grief-stricken, she hung herself. With her death, she lay a curse upon Athens until justice was served. Athenian maidens were found hanging from the pine until the Oracle revealed Erigone’s curse, and the guilty saw their justice.
The city instated a festival, the Vintage Festival, in which libations to father and daughter were made and young girls swung on branches of trees – leading to the invention of the swing. This valley is now known as Dionysus, possibly due to the gods’ decision to place the figures of this legend amongst the heavens; Erigone as Virgo, her hound Maera as Canis Minor or Canes Venatici, and her father as Boötes.
This is not the only variant of the Icarius and Erigone tragedy attached to this star cluster, but they are extremely similar. The difference is the beginning, where Icarius had traversed the lands trading his wine and it was only after his long absence that his daughter became concerned. His death by jealous shepherd was unknown to her, and her suicidal sacrifice cemented her plea to the gods: that Athens suffers as she has until the absence of her father is investigated.
Bee-zy Boötes
However, tales of Boötes also connect the herdsman to the tale of Jason and the Argonauts. He was a priest in Athens, dedicated to Athene and Poseidon, and married to his niece, Chthonia. On the Argonaut’s roll-call, the Athenian is named to be the ‘bee-master,’ and on the journey, it was Boötes who attempted to swim away from the Sirens call, just to be swept away by Aphrodite to Mount Eryx. 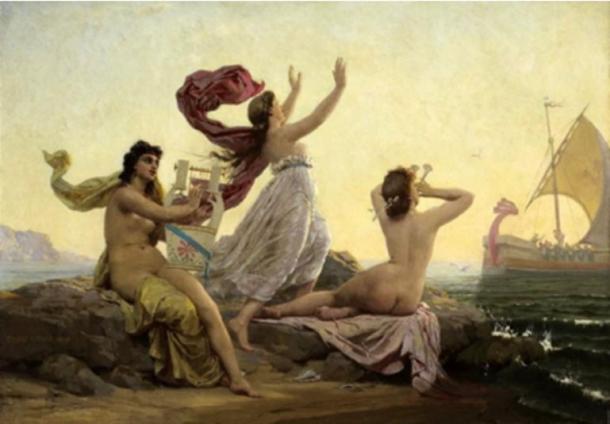 On this mountainside, Aphrodite, in an attempt to make young Anatolian lover Adonis jealous, seduced the bee-master and birthed him a son bearing the name of the mountain they had conceived him by. Eryx grew to be a wrestler who fought with Heracles – losing his life and kingdom in the process, and his daughter, Psophis, provided Heracles two sons. Interestingly, Mount Eryx is famous for its bee cult.
It’s known that star-lore was often pulled from other cultures. However, in this case, the confusion was made due to internal changes. The variant legends of Boötes are adjustments created by the Buteids in 6th century BC Athens – their influence on the city’s priesthood granted them access to alter mythologies to immerse themselves, and fully immigrate, to Athenian history.
Interesting, the tale of the wine-infused murder and curse of a city also displays evidence of being a non-native to Athenian star-lore. The name ‘Icarius’ itself indicates that this tale was born from the Cyclades, with the custom of swinging likely coming from Crete.
The Herder, or Bear-Gaurd
As previously mentioned, this constellation is often connected to Ursa Major and Ursa Minor – albeit in differing, and confusing ways. Lore exists that claims the herdsman to be pursuing the sky bears around the North Pole. There is another that claims he is the protector of the bears! 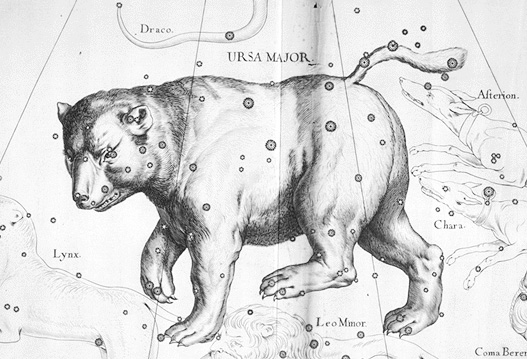 However, he has also been attributed to the son of the Ursa Major constellation. After being raised under the roof of Lycaon after metamorphic misfortune fell upon his mother, the unlucky youngster Arcas was served up to Zeus as a homely meal. Appalled, Zeus destroyed the home of Lycaon with a thunderbolt and transformed the insulting host into a wolf. Zeus reassembled the boy and entrusted his care to an Aetolian hunter. Raised to hunt, Arcas nearly let lose a fatal arrow that would’ve killed his own mother – who had been transformed into a bear. Zeus intervened and placed the family in the heavens.
Something older, maybe?
The histories of Petellides of Knossos tell us that there were two brothers, Philomelos and Ploutos, who did not get along. Ploutos, as indicated by his name, was greedy with his wealth, determined not to share with his poor brother.
Out of the necessity to survive, Philomelos worked himself to the bone in order to purchase two oxen. He then created and constructed the first wagon. His mother, Demeter of the Harvest, adored this invention and was proud of the achievements and ability of Philomelos to support himself through agricultural means. To display her admiration, she placed him amongst the stars as the ploughman.
Combi-constellation
Interestingly, the sources also seem to merge to create a story of a young farmer inventing the plough. He shared his work with fellow farmers, and word soon spread of the more efficient and less backbreaking invention. Farmers saw their pockets fill with more money due to the plough. So, because of his ingenuity, Bootes was placed amongst the stars and revered for his creation. This made his means of survival – agriculture – a lot less of a chore! 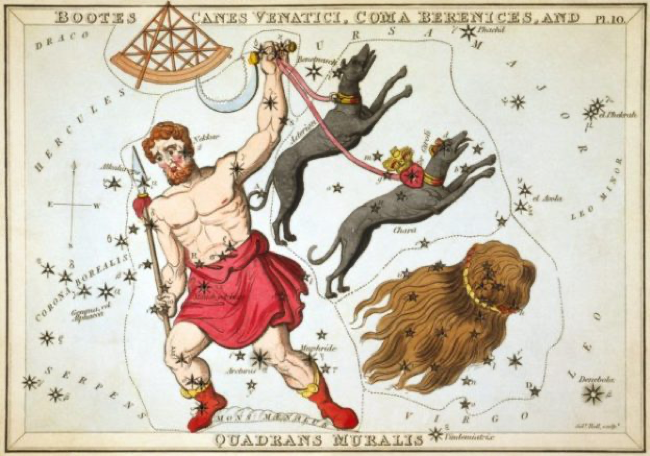 Boötes as depicted in Urania’s Mirror, a set of constellation cards published in London c.1825. In his left hand he holds his hunting dogs, Canes Venatici. Below them is the constellation Coma Berenices. Above the head of Boötes is Quadrans Muralis, now obsolete, but which lives on as the name of the early January Quadrantid meteor shower. Mons Mænalus can be seen at his feet.

In some legends, the constellation is known as Atlas, due to his position in the sky from pole to equator. While this is my favourite version of the myth, there is little information surrounding it.
It is clear that this constellation has many branches of mythology that intertwine with one another. Despite their differences, however, it is agreed that this is a man, revered for the sharing of his invention. All of them together tell the history of, and draw attention to, the importance of farming activities for the peoples of the ancient world, through an inspiring medium of starry stories.
Facebook