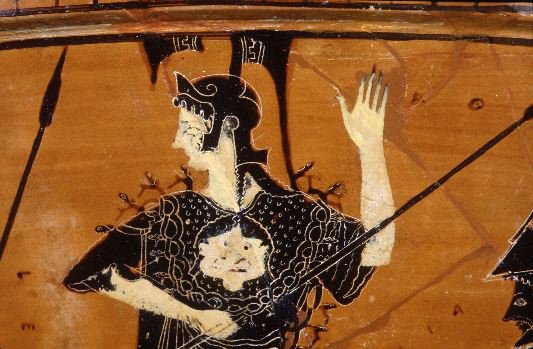 By John Mancini
The Gorgon Medusa, with her serpentine hair, lolling tongue and deadly gaze, is one of the most recognizable icons in mythology. Her popularity not only predates Classical Greece, but also extends through The Middle Ages, and can still be felt today. A mythical motif for centuries of artists, the Gorgon image appears in countless sculptures and paintings, especially in the Mediterranean – adorning everything from doorways of temples to sarcophagi of kings…
But was she seen as a Sea Monster or a Mother Goddess?
In the Greco-Roman world, the Gorgoneion-bearing aegis was a protective amulet, similar to the “evil eye” of witchcraft, appearing on the shields of Athena and Zeus. Its power could be transferred to whoever possessed it, an attractive feature to both gods and men. Apollo, for instance, harnessed the power of the Gorgoneion and used it to fight the Achaeans, while the mythical Perseus famously used the entrancing magic of the Gorgoneion gaze as a weapon, turning his enemy Polydectes to stone.
Real men, too, desired the deadly effects or protection of the Gorgon. Indeed, some of the earliest depictions of the Gorgoneion in Greece appear on the shields of warriors in the mid-fifth century B.C. where she is represented as a goat-bearded monster with tusks rather than a female demon.

Most contemporary readers, however, know the Gorgon as the snake-haired goddess from the myth of Perseus-Medusa in which she is one of three sisters, a trio of sea nymphs who occupy an island at the far edge of the ocean.

According to the poet Hesiod, after her defeat at the hands of the hero Perseus, Medusa’s blood spilled from her severed head and created the coral reef of the Red Sea, which tormented ancient mariners.

While the “Gorgoneion” was a popular motif in ancient art long before the Greek story of Perseus-Medusa, it only caught on rapidly in the sixth and fifth centuries BC. This is when the full-bodied Gorgon began to appear on temples to Athena and Artemis, as well as on coins, where she has been pictured opposite the owl of Athena or sun god Apollo.
Around 415 BC in Aeschylus’ Prometheus Bound, the Gorgon is portrayed as three swanlike snake-haired sisters who share one eye and loathe mankind. By contrast, Pindar claimed that Medusa was in fact “fair-cheeked” and Ovid later confirmed that she was irresistible to whomever encountered her.
So… was she hideous or beautiful?
Like Hermes advised Heracles when he pursued the Gorgon in the Underworld – it depends very much on how you look at her. Clearly, her description has changed over time and from poet to poet… but what was the first depiction? From where did this mysterious creature originate?
Well, the Gorgon Medusa is thought to have been a sea goddess born of Cetus and brought to Greece by way of seafaring tribes from Babylonia. In these early myths, she was a female deity who shared lineage with Artemis, Demeter, Cybele and Rhea.

The Gorgons represented a fear of and reverence for the awe-inspiring wildness of nature and animals. To the Greeks, the Gorgon’s challenging grimace was the very personification of Fear itself: Phobos. And in tracing the origin of the Gorgon, archeologists have linked her to just about every natural phenomenon imaginable, including the roar of the ocean, the eruption of volcanoes, the crack of thunder-clouds – as well as beasts such as boars, lions, cephalopods and of course, owls.
Although Greek depictions of the Gorgon monster did not properly appear until after the Geometric Period, the sisterhood of demonic winged snake-goddesses extends to ancient Phrygia, Phoenicia, Babylonia and Persia. This includes not only the great nature goddesses of Asia Minor, like Artemis, but also those from farther east, such as the multi-armed Hindu Goddess Bhavani, the wrathful counterpart of Parvati.

Perhaps most direct influence to the Greeks was the Babylonian Humbaba, a demonic grinning monster that guarded the mythic cedar forest and was slain by the hero Gilgamesh.

The Gilgamesh-Humbaba legend provided the model for the Perseus-Medusa myth, while visual elements from other Babylonian deities, like Abzu and Ishtar, which were also incorporated and re-interpreted by the Greeks. The fact that “sacred prostitution” was an ancient custom in Babylonian temples devoted to Ishtar may shed additional light on how the story evolved in Greece – in particular, the detail of Medusa’s rape by Poseidon in Athena’s temple.
Medusa’s appearances in Greek art during the 7th century B.C. in early Corinthian pottery were influenced by Assyrian art.

In these examples, the Gorgon is often pictured with a snout and tusks of a boar, as well as horns or wings, in addition to the snakes that traditionally crown her head.

One only has to look at the Mesopotamian terracotta plaque from 1750 B.C. known as the Burney Relief, which depicts Ishtar as a vampire-like goddess with wings, clawed feet and a serpentine halo of hair, to see an obvious resemblance to the Medusa of Archaic Greek art.
Although Medusa’s character may have become more distinct in the Greek myths, she still retained the features of the original nature goddess. As mentioned, she was related to Artemis, the patroness of wild animals, whose encounter with Actaeon was extremely bloody. Actaeon caught Artemis and her nymphs bathing in a wooded spring, which resulted in his transformation into a stag and subsequent demise at the jaws of his own hounds.
However, Actaeon only transformed once, while the Gorgon went through many alterations over the centuries. In The Middle Ages, the Gnostics christianized Medusa by surrounding her head with a halo of biblical scripture. In folktales she became the mermaid Melusine who transforms into a fierce sea creature after she is caught bathing – for to gaze on the naked goddess uninitiated has always been considered a profanation of the mystery of nature, one worthy of ultimate punishment.

In the late 20th century, the mermaid Melusine experienced worldwide resurgence in popularity when Starbucks chose her as its company mascot, and the Versace clothing company also adopted the Roman Gorgoneion as its logo.
It is Sicily, however, that still has the longest running claim to the Gorgon Medusa. Since 300 B.C. that Western Island basking in the Mediterranean sun has consistently incorporated the Gorgoneion into coinage and door handles, temples and sarcophagi. Sicily has even used the Gorgon on its flag since the 13th century. It can still be seen there today, surrounded by the triskelion, the three running legs of the Gorgon, as well as three shafts of wheat.

But perhaps one of the most compelling depictions of Medusa is an earlier one from the Temple of Artemis at Corfu, an island on the western coast of Greece. Dating back to 580 B.C., the temple was one of the largest of its kind. There, the winged Medusa resides prominently on the western pediment, flanked by two lions, as well as her offspring, the flying horse Pegasus and Chrysaor the warrior. Larger than Zeus, who hurls a lightning bolt over at the far end, her authority is unmistakable, and the power of her dual nature can be more clearly understood.
She is the Earth Mother, guardian of the natural world – both demon of the oceanic unconscious and mistress of wild beasts. To a soul worthy of her gaze, one need not worry about having the mirrored Athenian shield… as long as one approaches her with equal amounts of courage and respect.
Facebook