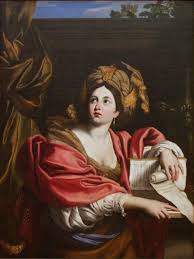 The Sibyl of Cumae

By Ben Amundgaard, Contributor from Noet, a Classical Wisdom Weekly Partner – Learn more about Noet Here!
In the ancient world, sibyls were prophetesses associated with a particular location. Many of their prophecies played key roles in determining the direction of important events. Though there were variations based on 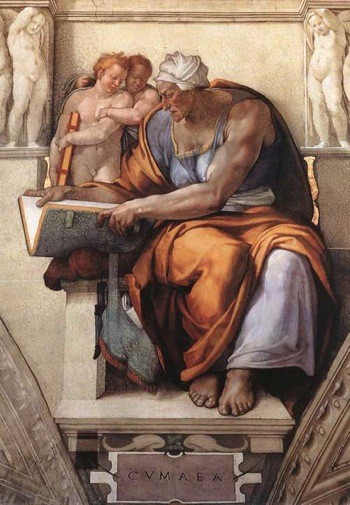 place and time, the sibyls all seem to share some characteristics. They were always older women. They gave their prophecies in an ecstatic state, under the power of a particular deity (often Apollo), and they were usually associated with a specific ancient oracle or a temple.
Though early sources refer to only one sibyl, the number eventually grew to 10: the Babylonian Sibyl, the Libyan Sybil, the Delphic Sibyl (though here it appears there was an elder and a younger sibyl), the Cimmerian Sibyl, the Erythrean Sibyl (again, an elder and younger), the Samian Sibyl, the Hellespontian/Trojan Sibyl, the Phrygian Sibyl, the Tiburtine Sibyl and, finally, the Cumaean Sibyl (OK, so there were 12?).
The Cumaean Sibyl is probably the best known of 10 (12) sibyls. Her cave was located near the town of Cumae on the western coast of Italy, in the same location as a temple of Apollo. While most often known as the Cumaean Sibyl or the Sibyl of Cumae, she is also variously referred to as: Herophile, Demo, Phemonë, Deiphobe, Demophile, and Amalthea.
The Cumaean Sibyl plays a crucial role in two events associated with the foundation, rise, and continued success of Rome. First, according to tradition she was the woman who sold the Sibylline books to the last king of Rome. Second, she prophesies to Aeneas about his future in Italy and takes him into the underworld to see his father (who tells him that his descendants will found Rome).

The Old Woman, the last King and the Sibylline Books

In the Roman Antiquities, Dionysius of Halicarnassus recounts the story of an old woman who came to visit Lucius Tarquinius Superbus (or Tarquin the Proud), the last king of Rome. She brings with her nine books that she claims contain sibylline prophecies. She offers to sell the books for what seems like an unreasonable amount of money. The king laughs at her ridiculous price. In response, the woman burns three of the books (boy … that escalated quickly).
A while later, the woman returns with the remaining six books and offers to sell them at the same price as the original nine. Again, the king laughs at her, assuming she has lost her mind. Again, the woman leaves and burns three more of the books (this is getting out of hand … fast).
Undeterred by the king’s obstinacy, the woman returns with the remaining three books. She offers to sell the king the three books for the same price as the original nine. This time the king does not laugh.

“Tarquinius, wondering at the woman’s purpose, sent for the augurs and acquainting them with the matter, asked them what he should do. These, knowing by certain signs that he had rejected a god-sent blessing, and declaring it to be a great misfortune that he had not purchased all the books, directed him to pay the woman all the money she asked and to get the oracles that were left.” -Dionysus of Halicarnassus (Roman Antiquities)

Aulus Gellius records a similar story in Attic Nights. In his story, however, the old woman burns the books in front of the king. In both accounts the old woman disappears after she sells the books. 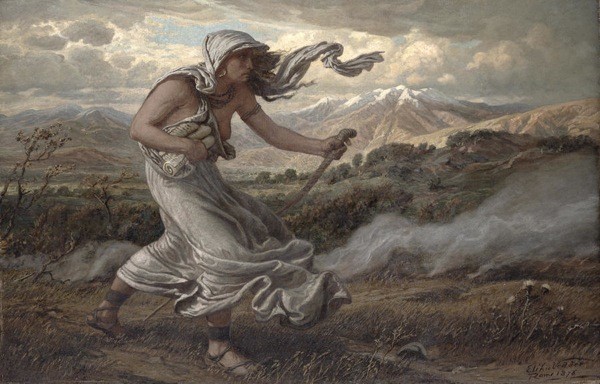 The Sibyl of Cumae by Elihu Vedder

The Sibylline Books (sometimes called the Cumaean Books) became crucial in the ongoing decisions of Rome. The lecti viri—a group of two (duumviri) men that grew to 10 (decemviri) and eventually 15 (quindecimviri)—guarded the books. When the senate’s seers couldn’t divine the meaning of extraordinary events or when Rome needed direction in times of crisis, they would order these men to consult the Sibylline Books.
The books often clarified the meaning of certain divine events or ordered particular sacrifices and oblations to avoid a disaster. Livy reports that, while strategizing for war,

“The state was at this time suddenly occupied with a question of a religious nature, in consequence of the discovery of a prediction in the Sibylline books, which had been inspected on account of there having been so many showers of stones this year. It ran thus: Whensoever a foreign enemy should bring war into the land of Italy, he may be driven out of Italy and conquered, if the Idaean Mother should be brought from Pessinus to Rome.” -Livy

The Romans take this prophecy very seriously and immediately work to bring the Idaean Mother to Rome.
The Romans took these books so seriously that, according to Dionysius, dereliction of one’s duty to care for the books could have disastrous results. When someone reported that one of the guardians of the books had allowed someone else to borrow one of them, King Tarquinius “ordered him to be sewed up in a leather bag and thrown into the sea….” Harsh, but perhaps not too harsh, given the role they played in the fate of Rome.

Virgil and the Cumaean Sibyl

In book 3 of the Aeneid, Aeneas visits a priest/prophet who tells him to visit the Cumaean Sibyl.

“And when, thither borne, thou drawest near to the town of Cumae, the haunted lakes, and Avernus with its rustling woods, thou shalt look on an inspired prophetess, who deep in a rocky cave sings the Fates and entrusts to leaves signs and symbols.” -Virgil (The Aeneid)

The sibyl has important news for Aeneas:

“The nations of Italy, the wars to come, the mode whereby thou art to flee or face each toil, she will unfold to thee; and, reverently besought, she will grant thee a prosperous voyage.” -Virgil (The Aeneid)

In other words, the fate of the founding of Rome rests on the prophecy she gives Aeneas.
In book 6, Aeneas finally visits Cumae and finds the sibyl. She tells him that though he has survived the troubles of Troy and the dangers of his sea voyage, he has further troubles ahead.

“O thou that at last hast fulfilled the great perils of the sea—yet by land more grievous woes await thee…. Wars, grim wars I see, and Tiber foaming with streams of blood…. Even now another Achilles is raised up in Latium, he, too, goddess-born; nor shall Juno anywhere fail to dog the Trojans, whilst thou, a suppliant in thy need, what races, what cities of Italy shalt thou not implore! The cause of all this Trojan woe is again an alien bride, again a foreign marriage!”-Virgil (The Aeneid)

She says, however, that Aeneas should not fear this fate, that he has the ability to rise above it.
Conveniently there happened to be a portal to the underworld nearby. As he wanted to go there anyway, Aeneas asks the sibyl if she will take him there to see his dead father. She says that he must first find a golden bough in the forest. On that bough will be a fruit. If he is able to pick the fruit, he will be worthy to visit the underworld.

Having completed the task (and burying one of his crew who had challenged the gods to a trumpet-blowing contest and been killed by Triton), Aeneas returns to the sibyl, who escorts him into the underworld. There, Aeneas meets his father, Anchises. After discussing some of the particulars of the underworld, Anchises shows Aeneas his future and the future of his descendants.

“Come now, what glory shall hereafter attend the Dardan line, what children of Italian stock await thee, souls illustrious and heirs of our name—this will I set forth, and teach thee thy destiny.” -Virgil (The Aeneid)

Anchises recounts the destiny of all of Aeneas’ descendants. As grandparents are often wont to do, he extols their greatness and victory.
Anchises tells Aeneas that among his descendants are Romulus, founder of Rome and Caesar Augustus (the first Roman Emperor and, perhaps not surprisingly, patron of Virgil). According to Anchises, Augustus will

“… again set up the Golden Age amid the fields where Saturn once reigned, and shall spread his empire past Garamant and Indian, to a land that lies beyond the stars, beyond the paths of the year and the sun, where heaven-bearing Atlas turns on his shoulders the sphere, inset with gleaming stars.” -Virgil (The Aeneid)

Aeneas is struck by the importance of his journey and is eager to get on his way. Once his father’s prophecy is over, the sibyl accompanies him back to the land of the living and, eager to continue his epic journey, Aeneas sets sail.

Clearly, the Cumaean Sibyl plays a crucial role in the founding and ongoing fortune of Rome. If it weren’t for her, the Romans would not have had the guidance of the Sibylline Books. If it weren’t for her prophecy, Aeneas would not have been prepared to rise above his fate in his journey towards Italy. If it were not for her guidance, Aeneas would not have met his father and not have known the import of his continued journey.
Learn more about the role of the Cumaean Sibyl and Aeneas’ epic journey in English and Latin with Noet’s Introduction to Virgil’s Aeneid. Classical Wisdom Weekly readers save 15% with the coupon code NOETCLASSICS.
Click here to learn more.
Facebook