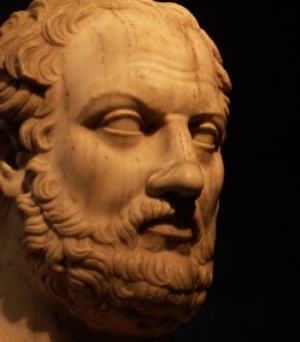 By Ben Potter
424 BC: Seven raging years after the start of the Peloponnesian War. Seven years of Greek on Greek, sword on sword, blood on blood. Seven years which have brought pain and pride to Spartans and Athenians alike.
Now is the time for a great man to come to the fore, to turn the screw, to be a hero.
The venue? The city of Amphipolis (literally ‘around the city’) up in the Thracian heartland. The players? The Spartan commander Brasidas and the newly elected Athenian strategos (general), Thucydides.

Brasidas has assaulted Amphipolis and is attempting to negotiate with its people. Thucydides marches his troops on the city knowing he has the upper-hand. After all, this is his territory.
Though an Athenian, the wealthy and aristocratic Thucydides owns land and gold mines in this area of Northern Greece. He can thus exert considerable influence over the local populace.
So he and his men arrive prepared for battle, ready to whet their double-edged xiphos swords on the briny blood of ignoble Spartans.
But…. disaster strikes. The perfidious Brasidas has talked the Amphipolitans round with terms of moderation.
The city is lost; Thucydides is disgraced.
His voted honour of strategos is stripped from him, as are all his rights of citizenship. He is cast out to wander a lonely and forlorn figure, branded forever with the stigma of exile.
However, it’s hard to keep a good man down….
Harder too if a man is independently wealthy, well-educated and related, not only to Miltiades and Cimon, but also to Thracian royalty.
He was also blessed with a robust constitution. Despite falling ill, Thucydides survived the great Athenian plague (430 – 426 BC). He commented on this truly catastrophic event in his ‘History of the Peloponnesian War’:

“As the disaster passed all bounds, men, not knowing what was to become of them, became equally contemptuous of the gods’ property and the gods’ dues.”

Throughout the war (431- 404 BC), Thucydides had been making copious notes and recording important speeches in order to write his History.
Now, unfettered from partisanship, exile gave him the freedom to travel extensively and unmolested. Not only because he was no longer occupied as a solider, but because he was not viewed as an enemy by any state. Instead he became that strangest of creatures; an ex-patriot expatriate.
The father of ‘scientific history’ and ‘political realism’ originally embarked upon his writing project as he had been able to augur the magnitude of the war from its outset.
Thucydides was well aware, much like a muddied, bloodied and bewildered soldier at Ypres would have been, that he was living through a time of unusually powerful danger and destruction.
Thucydides considered the war to be an event, not a time-frame and tackled it thus.
He considered the history of the war unique unto itself; hermetically sealed away from entertaining trivialities like art, literature and society.
The great man himself said:

“To hear this history rehearsed, for that there be inserted in it no fables, shall be perhaps not delightful. But he that desires to look into the truth of things done, and which (according to the condition of humanity) may be done again, or at least their like, shall find enough herein to make him think it profitable. And it is compiled rather for an everlasting possession than to be rehearsed for a prize.”

Thucydides, though with the noblest of intentions, would be considered by modern standards something of a hack. He was well-intentioned and capable, but never enlightens with the scholarly cut and thrust of Polybius.
Regardless of his bias for the politician Pericles (or against Cleon) there is one overriding problem with the text. Buckley put it succinctly: “The thorniest problem in using Thucydides as a reliable historical source concerns the authenticity of his speeches”.
Thucydides himself reinforces this:

“It has been difficult for me to remember the exact words that were spoken in the speeches that I myself heard, and for those who brought me reports of other speeches. Therefore it has been my method to record speeches which I thought were the most appropriate for each speaker to give in each situation, while keeping as close as possible to the general sense of what was actually said”.

However, quarter must be given as, at the time of Thucydides, historiography is in its infancy, still being fired in the crucible of time.
As Terry Buckley concludes: “Thucydides is by far the best of our literary sources and where there is a direct conflict in the evidence supplied by him and by other historians, his version is to be preferred”.
His usefulness and legacy outstrip those of all his contemporaries. If, for no other reason, than the fact that his work increased accountability – it let leaders know that their blunders wouldn’t be lost to the ages, but read, reread and analysed, potentially to their detriment.
Regarding the outcome of the Peloponnesian War, Thucydides claims it pivoted on the fate of the perverted genius Alcibiades who was also forced into exile: “they personally objected to his private habits; and so speedily shipwrecked the state”.
Thus the destiny of the war may have been decided by hot-headed voters exiling their brightest and their best as a consequence of short-term outrage.
Thucydides, despite his supplies of gold was no mere member of the idle-rich, but a dynamic, wealthy warrior and thinker, who the Athenians were also foolish enough to turn away from their society.
It is because of Thucydides’ tenacity and foresight that his wisdom, and the folly of the Athenian demos, live on.
Facebook