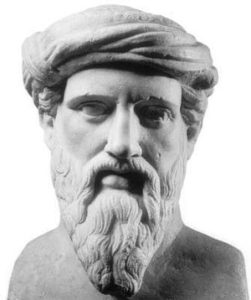 “Reason is immortal, all else mortal”
While Pythagoras has become known as one of the first revolutionaries in the field of philosophy and mathematics, surprisingly little is known about him, as he kept no writings of his own. All that we have learned about Pythagoras and his teachings has come to us indirectly through the writings of others.

What we do know about Pythagoras is that he was born in about 570 BCE. He visited Egypt as a young man and learned extensively about mathematical relations, proportions, and a rudimentary form of geometry. It is believed he studied within the Milesian school that had been founded by Thales a generation before. This school was devoted to uncovering the nature of the universe through objective, non mystical means; and while Pythagoras would not outright disagree with the ideas of Thales, he did take a different approach to exploring metaphysics. To Pythagoras, mathematics was the key. It was the form and order that existed in all things and through it the universe had come into being.

While in Egypt, Pythagoras had learned much about geometry, and he was taught that a triangle with ratios of 3:4:5 would always have  a right angle. While this was very useful in fields such as architecture, Pythagoras would go one step further. He uncovered the underlying equation that constituted this observation. Pythagoras was the original intellectual who discovered that the square of a triangle’s hypotenuse equals the sum of the squares of the other two sides.
This idea is more commonly known by the equation: A²+B²=C². That’s right, Pythagoras was the creator of everybody’s favorite equation from high school math class. This discovery was profound, revolutionary in fact. Never before had a thinker discovered this truth that has been shown to be universally true. This concept was so extraordinary that Pythagoras interpreted it as being divine.
Click the link to learn more about Pythagoras
-Pythagoras and the Revolution of Mathematics
Facebook