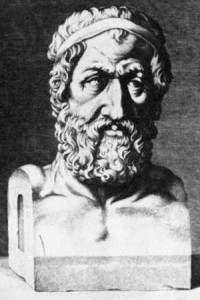 Zeno of Elea was a rather interesting presocratic philosopher, though that isn’t to say other presocratics were uninteresting. There were plenty of thinkers who proposed very bold, ambitious ideas in an attempt to decipher some form of truth. Zeno of Elea, however, was the most notable because of his assertion that motion, as we know it, is impossible. Not only did he make this large claim, he attempted to prove it.

Zeno was a disciple of Parmenides, who was the philosopher who went one step further, by claiming that any form of change is impossible. It is largely believed that Zeno’s arguments, later known as ‘Zeno’s Paradoxes’, were constructed as a means to support the argument of his mentor that “all is one” and that the universe is incapable of any fundamental change.

Zeno was one of the first thinkers to rely consistently on the argument of Reductio ad absurdum. This is the process of arguing that a statement is false by asserting that an absurd result would follow the acceptance of that idea. Zeno and Parmenides relied entirely on rational thought and argumentation to arrive at conclusions, as they believed very strongly that information from our senses was inaccurate and misleading.

This is probably a good position to take, because all of Zeno’s paradoxes could presumably be disproved through simple observations. After all, you could start waving your hands around and then consider this idea disproved.

Zeno makes the argument that motion is impossible. He does this through a rather simple, eloquent, but still confounding series of arguments. Essentially, Zeno contends that before an object can reach its target, it must first achieve the halfway mark. After that, the object is obliged to traverse to the median of the remaining distance. Continuing on, it must then reach the next halfway mark again and again and again, Ad infinitum.