An end in itself

That knowledge was intrinsically desirable was something of a given in the minds of the classical thinkers. Socrates, the father of Western philosophy, scolds his fellow Athenians who turn their back on knowledge…
Aristotle, similarly, holds the position that knowledge was desirable in and of itself, and refers to wisdom as “our finest element” within his Ethics…
Cicero, the famous Roman orator, held up reason as the cornerstone of all virtuous laws…
That the ancients held wisdom in such high regard is made all the more significant by the fact that their institutions of higher learning were dramatically different from our modern schools.
Plato’s Academy, often considered the first “university” of the Western world, was more of a meeting of the minds, a place for ancient thinkers to gather, rather than a structured institution with a codified curriculum. The Elatic, Milesian, Epicurean, and Stoic schools of philosophy followed a similar tradition of passing on their teachings through informal gatherings that attracted hungry minds from across the ancient world.

Aristotle’s Lyceum, notably, begins to come closer to our modern university system. Aristotle held regular classes and even kept lecture notes. But here, again, the goal was acquiring knowledge for the sake of knowledge. Securing a B.S. or gaining marketable skills for the workplace was not a consideration for the earliest students of the classical age.
The universities have failed you
Flash forward a few thousand years. A modern student might be forced to admit that attending university is a reaction to societal or parental expectations. “Getting an education” has become the primary goal. Learning to learn might be a happy correlation, but it is no longer the principal aim that it once was. 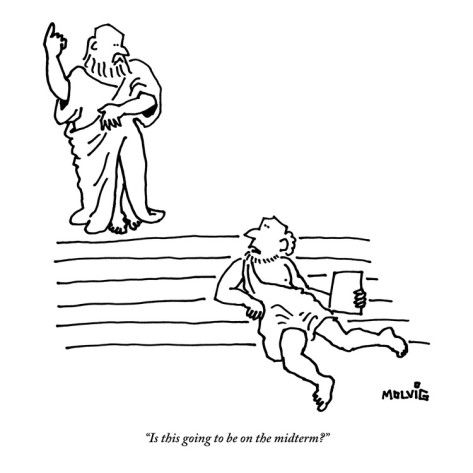 New Yorker Cartoon Poster Print by Ariel Molvig at the Condé Nast Collection
Such a state of affairs is, in your editor’s humble opinion, a true shame and one of the ultimate failings of the modern education system. The reason is that I still hold the opinion, originally put forth by the ancients, that a virtuous life is intimately connected to wisdom and understanding.
The idea that a “good life” could only be truly found through a cultivation of wisdom was the belief of the ancient philosophers. The philosopher, the lover of wisdom, was therefore a seeker of what Plato referred to as “The Good” or Aristotle’s eudemonia, “ultimate human flourishing.”
Or as Socrates put it…
But here, again, we see that the idea that virtue is in anyway related to knowledge, has become absent in the university. This idea is best expressed By Robert Frodeman and Adam Briggle, philosophy professors from the University of North Texas, who wrote in the New York Times just last January…
Ignorance is optional
A sad state of affairs to say the least!
Our students are racking up mountains of debt, devoting their lives to pursuing an “education” and we have no guarantee that they are learning a thing or becoming better people in the process.
What to do?
Joel Bowman, fortunately, has an answer for us.
Thanks Joel, couldn’t agree more. Although, I would add the caveat that if ignorance is optional, then so is baseness. I think our ancient friends would agree.
So do yourself a favor, dear reader, never let your education get in the way of learning. The classics are a great place to start. Or, you could keep reading Classical Wisdom Weekly.
Facebook