By David Hooker, Contributing Writer, Classical Wisdom
Who hasn’t looked up into a sky full of stars and wondered what our place is in this vast universe? What is the nature of this environment we find ourselves living in? Are there underlying substances to this “stuff” that makes up our world? For the contemplative among us, there are all too often few satisfying answers, yet an endless list of questions. This is especially true for those of us who have cruised around our sun on planet Earth for many years, as when we were younger we seemed to “know” everything! A revered professor of mine once said that as we progress in age, that is precisely the trajectory: as we go along, the “answers” become fewer and the questions accumulate, until we have pretty much nothing but questions! Perhaps that is a bit cynical, but not far off the mark in my opinion.
Empedocles, an ancient Greek philosopher, was one such man who contemplated these essential questions. Born in Acragas (now Agrigento), Sicily, sometime during the early 5th century B.C., and dying in 444 B.C., he belongs to a remarkable group of philosophers we call the pre-Socratics. Among this group are many incredible thinkers such as Thales of Miletus (with whom is normally reckoned the beginning of this era; born in 624 B.C.), Anaximander, Anaxagoras, Protagoras, Heraclitus, and the list goes on up until Socrates (born 470 B.C.). 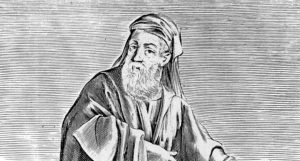 I liken this period to the “Big Bang” of Western philosophy, since so many of the questions that have occupied the philosophic enterprise from that day until now were articulated, pondered, debated, and written about during those nearly two remarkable centuries before Socrates. The role of the senses in knowledge, the nature of reason, morality, religion, the gods, the soul, and what kind of stuff the universe was created of, are just some examples. The questions asked then, as well the methodologies and schools of thought that developed in order to answer them, have persisted to this day (with variations of course).
What we today call “Greece” was then a far flung set of city-states and islands throughout the Mediterranean, modern (western) Turkey, the Aegean Sea, etc. This was a time when these various geographic locations were the hubs of trade routes, aiding the transportation not only of goods but of a plethora of cultural, religious, political, and philosophical ideas.

What is This Thing Called Nature?

Empedocles was a poet, and his only surviving major works (in fragments and written in hexameter) are On Nature (Peri Phuseos) and Purifications (his later religious-themed work). Being that I could write all day about Empedocles and the implications of his thought (and you likely have other Classical Wisdom Weekly articles to attend to, don’t you, dear reader?), I will attempt instead to give a brief overview of On Nature.
For many of the pre-Socratics, their approach to philosophy consisted of trying to get at the root of things, beginning with the universe at large and then moving inwards from there. Empedocles posited four underlying substances, or “elements” comprising nature (phusis): Earth, Air, Fire, and Water. These he considered to be the “roots” of the “stuff” which we perceive and interact with every day. This view of nature remained prevalent in western thought down to the Renaissance. (It still survives today in some circles, especially in neo-Pagan thought.)
Of course, today we generally have a far different understanding of the word “elements,” or the underlying “stuff” of the natural universe. Our modern understanding of “all that is” (for Materialists, anyway) comes down to the 118 elements (as of 2017) arranged on the periodic table. (Catalogued in this fashion beginning with Mendeleev in 1869.) The air that we breathe, for instance, is comprised of several gases, primarily nitrogen (78%), oxygen (nearly 21 %), and argon (nearly 1%), along with other trace elements.
As the entire philosophic enterprise is often referred to as a millennia-long “conversation,” individual philosophers, such as Empedocles, are often seen as in conversation with, or as reacting to, other thinkers of their time (or immediately preceding). From Parmenides, Empedocles accepted the fundamental principle “that nothing can arise out of nothing,” nor can anything perish into nonentity. Sound familiar?! (“Matter is neither created nor destroyed” – 18th Century French chemist, Antoine Lavoisier) Whereas for Parmenides this meant that all motion and change must be illusory, Empedocles admits that there is a real process in nature: “the mixture and separation of things mixed.” 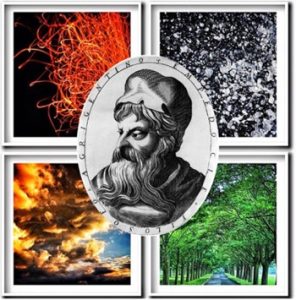 A wood engraving of Empedocles and the four elements/roots.

Since the elements are four (rather than a monistic “One”), Empedocles then is able to explain natural change as the result of the combination, separation, and regrouping of these indestructible entities. Moreover, in Empedocles’ thought, these four interact continually under the influence of two cosmic powers on the other: Love and Strife. These two function as forces of attraction and repulsion. The power of Love, for instance, functions first by bringing together “like” together with “like,” (earth to earth, fire to fire, e.g.), but also assimilates the four elements one to another, creating a homogeneous compound of organic unity.
Strife, on the other hand, is seen as a force of differentiation and repulsion for the elements, one that creates great diversity in nature. This is really what we mean by the statement that the Universe (humanity as well) is “dynamic” (think plate tectonics, volcanism, impact events, etc.) – nature seems to be both “fixed” in the sense that matter is neither created nor destroyed, yet always in flux by forces molding and shaping the reality we perceive. It is not that the universe itself undergoes any fundamental change, but that the forces of Love and Strife, with their constant bringing-together and forcing-apart, create what we see as “change” over time. Here is a chart roughly depicting Empedocles’ view: 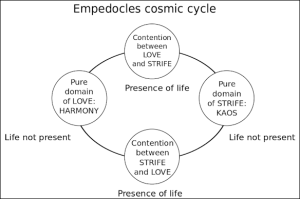 What is This Thing Called Love?

Sometimes charts just don’t quite cut it. If you asked me to show you what love is, dear reader, you would likely be disappointed if I returned with a chart like the one above. Thus, along with the chart I have decided to appeal to this great song from the popular American music composer Cole Porter, because I believe it will further aid us in envisioning exactly how Empedocles conceived of the universe.
Cole Porter penned many songs that have been adapted by jazz musicians over the past nearly one hundred years, with “What is this Thing Called Love” being one of the most popular (it now belongs to the pantheon of classic tunes from the “Great American Songbook” that Jazz musicians love to play and improvise over). Jazz musicians love to rearrange the chord structures of popular songs (called “substitutions” – often thought to be “hipper” and more accommodative to improvisation on instruments such as saxophone, trumpet, piano, bass, et.al.). They also love to change the underlying rhythm (resetting it to Latin rhythms, swing feel, ballads, etc.) and tempos (faster or slower). It is a real art to do this in a way that both pleases the players and the audience, and to come up with something “new” and relevant to the occasion.
As I continued to think about Empedocles, it occurred to me that the jazz musicians’ art could serve as an analogy to Empedocles’ understanding of Love and Strife. Though western music utilizes 12 different tones (in a chromatic scale), it’s all in how they are juxtaposed that makes something “new” out of the underlying, unchanging substances, or notes (a new melody, new set of chord changes, rhythms, etc.) of music. As is the case with Love and Strife, acting on the four primal Elements in various ways, the 12 different tones are constantly being brought together and forced apart in various ways by musicians, while, like the products of Love and Strife, beings still dependent on what underlies them. As Empedocles put it,

Now there grows to be one thing alone out of many; now again many things
separate out of one.

Hopefully you have found this analogy helpful in understanding the way Empedocles viewed the universe. Music, like Nature, has shown itself to be a constant source of new creations. This is no surprise, as music is a product of Nature’s many creations. For Empedocles, it is the forces of Love and Strife that make the universe so dynamic. As a result, life is dynamic, and it is this very dynamism that makes it so joyful to contemplate. Empedocles, along with his fellow pre-Socratics, set Western philosophy on a journey of contemplating the cosmos. Friends: we are most fortunate to be able to continue their enterprise. Let us not take it for granted.