A dominant city-state in ancient Greece, Corinth would grow to prominence as a trading center in the early Mycenaean age and then would decline with much of mainland Greece in the years following the collapse of the Mycenaean empire. A city built on the Isthmus of Corinth, it was located between ancient Sparta and Athens. It is believed that after the Bronze Age, Corinth would be re inhabited sometime around 900 BCE and grow to become a prosperous city during the Classical and Hellenistic period of Greece.
Corinth is a site for many popular myths and legends of ancient Greece. It has been told  that Corinth was founded by Corinthos, a descendant of Helios, the sun god. Corinth is also the city where Jason, leader of the Argonauts, is said to have abandoned Medea. It is said that the city of Corinth engaged in the Trojan War under the leadership of Agamemnon. 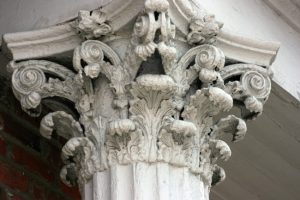 Corinth would become a major port of trade for the ancient world and would become very wealthy during Classical Greece. For a time Corinth would become the number one exporter of black figure pottery across Greece, until they were surpassed by the pottery exporters of Athens. Corinth is also notable for their development of Corinthian style architecture, which can bee seen in the very elaborately designed Corinthian columns.  The Corinthian columns also reflected the extravagant, highly stylized essence of Corinth.
Corinth supposedly possessed a temple to the goddess of love, Aphrodite. The temple supposedly housed hundreds of prostitutes who charged extravagant prices for the pleasure of their company. Much of the lifestyle in Corinth was similarly luxurious and very expensive. Corinth was so luxurious and expensive that it was noted by the poet Horace, that “Not everybody is able to go to Corinth”
Corinth would become involved in ancient warfare time and time again. It is believed that one of the factors leading to the Peloponnesian War involved a dispute between Athens and Corinth over the colony of Corcyra. Corinth would become a valuable ally to Sparta and would wage war against Athens as the Peloponnesian War escalated. Strangely, just as the Peloponnesian war ended, Corinth along with Athens, Argos and Thebes would become involved in the Corinthian war and battle the dominant Spartan Hegemony.
Facebook