The History of the Rosetta Stone

By Edward Whelan, Contributing Writer, Classical Wisdom
Ancient Egypt has fascinated people since ancient times. However, the history and knowledge of the land of the Pharaohs were lost for centuries because people were unable to read the ancient writings of the Ancient Egyptians…that was until the chance discovery of the Rosetta Stone. This remarkable artifact allowed the modern world to once again read the texts of the Ancient Egyptians. 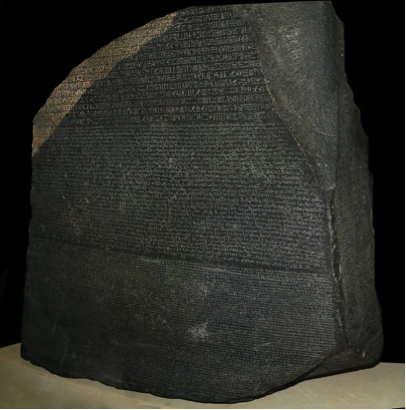 Egyptian writing
Ancient Egyptians used hieroglyphs in their writing system, which are pictographs that represent some concept or idea and is very different from those based on alphabets. However, they also developed a demotic script that was similar to other writing systems, such as Greek and Latin. Following the Christianization of Egypt, knowledge of the ancient writing systems was lost because the Egyptian priests were persecuted, and their temples all destroyed. As a result, the world of the Pharaohs and their subjects remained a mystery.

The History of the Rosetta Stone
The writings of the Egyptians remained enigmatic until the invasion of Egypt by Napoleon. In order to outflank the British in 1798, the French general decisively defeated the Mamelukes, the descendants of slave-soldiers who ruled the country, at the Battle of the Pyramids. Napoleon also brought with him to Egypt scientists, historians, and other researchers. They played a very important role in the development of Egyptology, which opened up the wonders of Ancient Egypt to the West.
The most important discovery was the stele that came to be known as the Rosetta stone.
One day in the hot summer of 1799, a French officer and engineer, Pierre-François Bouchard, was overseeing work on a planned fortress in Rosetta, an important port in northern Egypt. When he came across a stele or monument that was made from a block of granite, he knew it was important and alerted experts. The officer had discovered one of the most famous artifacts in Egyptology.

The Battle of the Pyramids

The Rosetta Stone- What Is It?
The stone is a stele which has engraved on three sides a decree that was issued by Pharaoh Ptolemy V in 196 BC. He was a member of the Macedonian Ptolemaic Dynasty that was founded by one of Alexander the Great’s generals. The decree was a ruling from a priestly council in Memphis which granted the monarch the status of a living god and urged Egyptians to make sacrifices to the new god-king. This was an effort by Ptolemy V to legitimize his rule in the eyes of his Egyptian subjects, who hated their Macedonian overlords.
The granite piece stood in a temple for many centuries but when Christians closed it, the stele was used in the foundation of a new building. The original stele was broken up, and what remained was the largest fragment. It was later incorporated into the foundation of a building during the Middle Ages and laid there until it was rediscovered by the French officer. 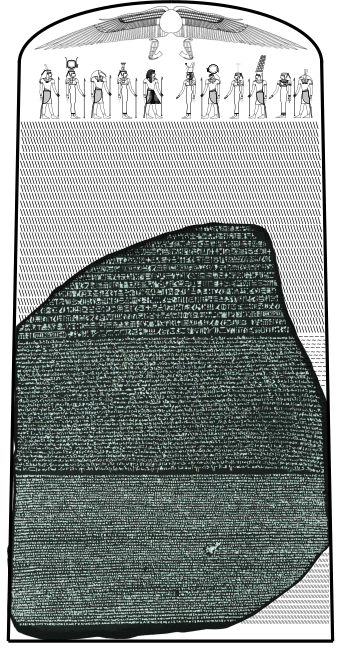 One possible reconstruction of the original stele

The Rosetta Stone’s Writing
The stone is not important in itself. However, what makes it priceless is that it contains three different versions of the decree of Ptolemy V. There is Greek which was the language of court and the Macedonian elite who ruled the country. However, the vast majority of Egyptians could not read Greek and could only read demotic Egyptian or Hieroglyphs. This meant that the decree was also issued in demotic and hieroglyphs. This was a stunning find.
Experts could read Ancient Greek and indeed were very proficient in it. They could use the Greek to learn how to decipher the two Egyptian texts. In this way, they knew that they had a great opportunity to finally understand the writings of the great and mysterious Pharaohs. 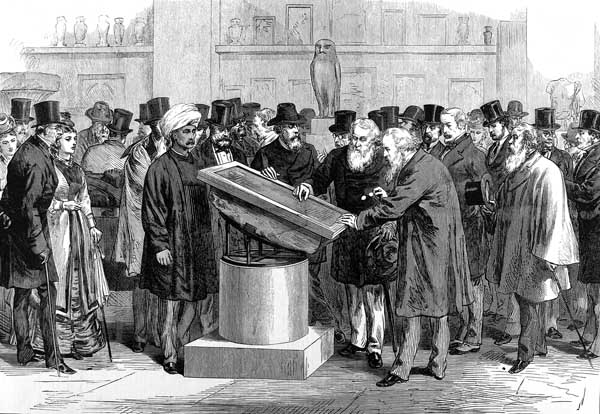 Experts inspecting the Rosetta Stone during the Second International Congress of Orientalists, 1874

The discovery of the stone and other treasures led to a craze in Europe for all things Egyptian.
The Race to Decipher the Stone
Technically it should have been easy to decipher the decree, especially as the French made impressions of the writings and they were published and circulated all over Europe. Classicists and linguists all studied the writings in a race to be the first to read the words of the Ancient Egyptians.
It took many years before a breakthrough in 1803 when the first full translation of the Greek version of the decree appeared. However, here was a great rivalry between experts, in particular the French and English, with regards to the Egyptian texts. Finally, in 1822 Jean-François Champollion announced he had made a successful transcription. He was the first person to fully decipher the stone and allowed people for the first time in centuries to read the writings of the Pharaohs. It’s important to note still that his work was only possible because of the earlier research of English linguists, especially Thomas Young. 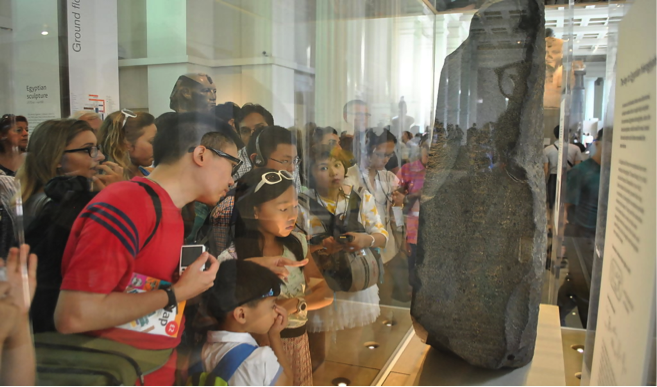 Visitors viewing the stone at the British Museum

The Fate of the Stone
Nelson’s great victory over the French at the Battle of Aboukir Bay (1799) doomed Napoleon’s invasion. He soon fled back to France and the stone was seized by the British after they defeated the French in 1801. The stele was taken back to London where it has remained ever since. It can be seen to this day in the British Museum.