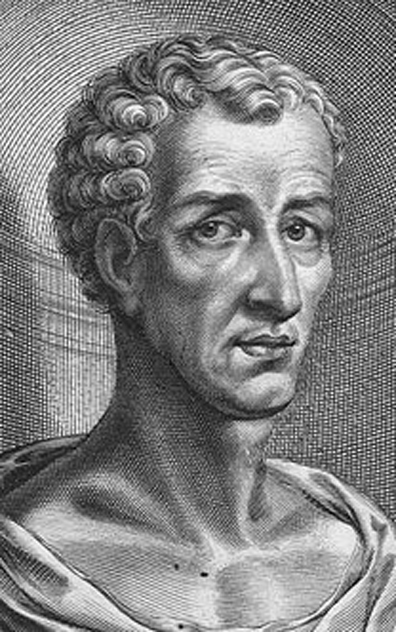 Voyage To The Moon

Considering the strange nature of this tale, we simply can’t launch into this without a little background information. The sheer insanity of the story might permeate through your computer screen and cause you to question your own grasp on reality. Let’s take a few baby steps, shall we?
Lucian’s True History is a blatant parody of celebrated classical epics like The Odyssey and The Iliad.  Homer may occasionally dabble in mythology, but Lucian indulges to the point of absurdity. His stories include, among other things, space travel, men riding on the backs of vultures, space centaurs, vegetable themed warriors, and an all out war between the inhabitants of the moon and the sun.
The irony of Lucian’s True History, rather obviously, is that it is an epic tale where absolutely nothing is true. The author tells us as much himself…

“For now I make the only true statement you are to expect- that I am a liar. This confession is, I consider, a full defence against all imputations. My subject is, then, what I have neither seen, experienced, nor been told, what neither exists nor could conceivably do so. I humbly solicit my readers’ incredulity.” -Lucian (True History)

This ironic humor is only heightened by the narrator, a man who continues to profess the accuracy of his tale even as the stories become more and more unbelievable.
“Any one who doubts the truth of this statement has only to go there himself, to be assured of my veracity.” -Lucian (True History)
Why was such a tale ever crafted in the first place? Well, Lucian tells us that just like an athlete must occasionally rest from his training, so to must intellectuals take a break from the philosophy and literature of high-minded individuals. It’s kind of like when you stop doing actual work around three in the afternoon and start watching cat videos on the internet.
Since we have discussed some rather serious philosophical topics the past few weeks, I thought it might be a good change of pace if we looked at something that didn’t question the essence of reality or consider the truest form of virtue. For once, let’s look at something that is, and let’s be honest, a bit silly.
The tale begins innocently enough. The narrator tells us that he set out on a quest to explore the lands beyond the Pillars of Hercules (the Strait of Gibraltar) with a crew of fifty men and a ship that was well equipped for a long and arduous journey.
For the first day the ship traveled serenely through the waters and managed to keep sight of land. However, on the dawn of the second day the wind rose to a gale and the seas turned dark. The wind took hold of the sails and, being unable to navigate, the crew was carried away by the torrent for eleven long weeks.
Lucius tells us that the crew then landed upon a mysterious island. Upon investigating the island, they found a pillar upon which was inscribed,
“Heracles and Dionysus reached this point.”
Continuing on, the explorers came upon a river that flowed red with wine. They found fish living within the waters and learned that eating the creatures would cause a man to become drunk. 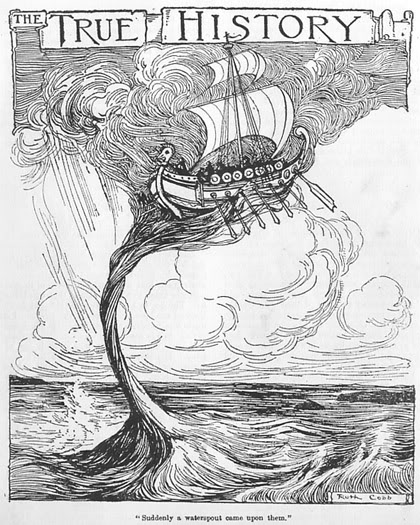 The explorers met other incredible sights. They witnessed creatures with the torsos of women, but tree trunks where a woman’s legs would be. They sprouted vines from the tips of their fingers and embraced the travelers and kissed them upon the lips. While the men were amused with the creatures at first, they found that whoever embraced the tree-women for too long would suddenly be transformed into a tree himself. After two explorers were transformed to a pile of vines, the remaining men ran back to the ship in horror and set sail immediately.

Okay, so that wasn’t so crazy. Compared to other ancient myths, a mysterious island with a river of wine and tree-women monsters are par for the course. But Lucian isn’t done, he is just getting warmed up.
Rather than calm seas and a return trip home, the explorers are swept up by a tornado and carried to dizzying heights. For an entire week they are carried upward by the winds. On the eighth day, the explorers come upon a shimmering island surrounded by glistening air instead of water. It did not take the explorers long to realize they had landed on the moon. 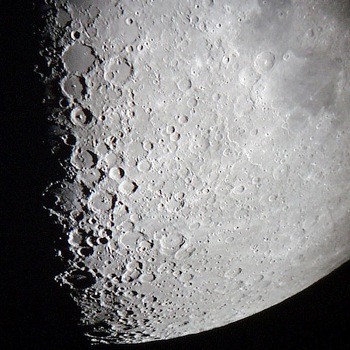 Before long, the explorers are discovered by soldiers riding on the backs of giant vultures. The men are detained and brought to the court of the king of the moon.
A man named Endymion, the moon king, recognizes the explorers as Greeks. He confides in them that he too is mortal and had begun his life on earth. It was only after falling asleep one night that he mysteriously was transported to the moon and had become ruler of the country.
Rather than enslaving or punishing the Greeks, Endymion asks them to join him on a rather lofty military campaign.

“And if I am victorious, he added, ‘in the campaign which I am now commencing against the inhabitants of the Sun, I promise you an extremely pleasant life at my court.’ We asked about the enemy, and the quarrel. ‘Phaethon,’ he replied, ‘king of the Sun (which is inhabited, like the Moon), has long been at war with us.” – Lucian’s True Histories

As strange as this all sounds, and it sounds pretty strange, this is still an ancient Greek epic. And no Greek epic, whether it be The Iliad or Voyage to the Moon, would be complete without an epic battle. But Lucian’s battle is one that is so massive and so ridiculously fantastic that it makes the Trojan War look like a playground skirmish.
Lucian’s explorers assent to the King’s proposal. They saddle up upon the backs of the giant horse-vultures and take their places in the ranks of the other warriors.
Lucian tells us that moon’s army contained nearly 100,000 soldiers; 80,000 of these soldiers were mounted on the backs of horse-vultures. The remaining 20,000 men were mounted on Salad-wings. These latter creatures are monstrous birds whose wings resemble the lettuce leaves that we see on earth.
In addition to these numbers, there are 30,000 archers who ride on the backs of giant fleas. Additionally, there are 50,000 infantrymen known as “Wind-coursers.” These warriors fly through the air using their oversized shirts as sails. 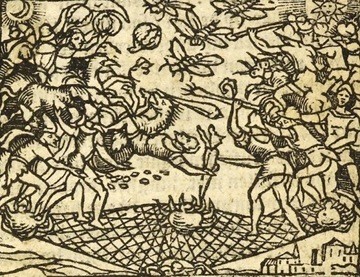 There are spiders the size of an Aegean island that stretch their webs across the vastness of space. The warriors of the moon walk on these web bridges and prepare for battle against the forces of the sun.

70,000 Ostrich-slingers and 50,000 Horse-cranes were said to have been on their way from a neighboring star, but they did not arrive in time to see battle. Lucian does not bother describing these warriors as he, rather unfortunately, did not witness them with his own eyes.
The forces of the sun are equally numerous and equally outrageous. There are Sky-gnats, archers who sling large turnips, dog faced men who ride on flying acorns, and vegetable themed soldiers who use mushrooms as shields and asparagus stalks as spears.
The battle commences!
“The Sunite left at once broke without awaiting the onset of the Horse-vultures, and we pursued, slaying them. On the other band, their right had the better of our left, the Sky-gnats pressing on right up to our infantry. When these joined in, however, they tumed and fled, chiefly owing to the moral effect of our success on the other flank. The rout became decisive, great numbers were taken and slain, and blood flowed in great quantities on to the clouds, staining them as red as we see them at sunset.”
Victory seems all but assured for the forces of the moon. Just as defeat seems unavoidable for the sun army, much needed reinforcements arrive.

Cloud-centaurs, flying horse/human hybrids from the milky way, arrive from nowhere and attack the disarrayed moon forces. The army or Endymion is defeated and the human explorers are taken as hostages.
This is a grim sight indeed. Our heros are taken as prisoners, the moon forces are crushed, and it seems that this tale might end with death for our explorers. Very fortunately, Endymion seeks peace with Phaeton, the king of the sun.
It is agreed that all hostages will be released to their homelands, neither country will pursue violence against the other, and the moon king will pay a yearly tribute of ten thousand jars of dew to the king of the sun.
Our heros are returned to the moon. The king asks them to stay and live out their years among his people. It would seem, however, that our explorers have had quite enough of lunar warfare and request that they be sent home.
The king reluctantly agrees. After some feasting and celebration, our narrator and his men are returned to earth.
Lucian’s story continues in a similarly outrageous fashion back on earth. Our explorers are swallowed by a whale that measured 200 miles long, they discover a sea of milk and an island of cheese. They even discover a mystical island upon which can be found the heroes of the Trojan war and even Homer himself.
You may be scratching your head at all of this. Like I said, it is one of the strangest pieces of literature I have ever read. It is also considered the very first science fiction text, and for that reason remains of curious interest to classical enthusiasts like ourselves.
If you want to read about Lucian’s voyage to the moon in its entirety, and trust me you do, then you really ought to order The Essential Classics.  You really never know what you will uncover.
Facebook