In Pursuit Of The Good

If Plato’s ideas on ethics seems a bit hazy to you, then rest assured you’re not alone. There are several reasons why Plato’s conception of a good life are illusive. For starters, in all of his early dialogues the philosopher spends his time giving a thrashing to our conventional ideas of virtues such as justice, piety, and bravery. 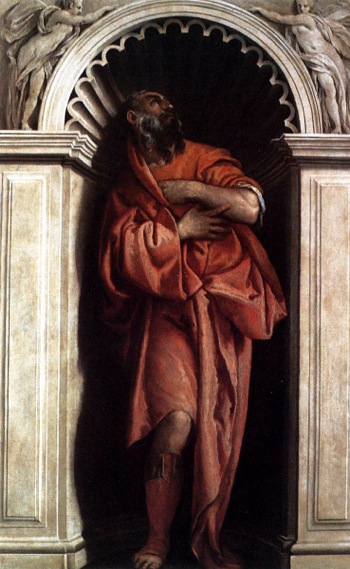 It is only in Plato’s later dialogues, specifically The Republic, that the philosopher articulates, to any discernible degree, his ideas on human virtues and their relation to a good life. However, even this is done through the voice of the grand old master, Socrates, leaving room for interpretation and further obscuring our view of Plato’s true philosophies.
Additionally, Plato’s ethics are based upon metaphysical presuppositions that often appear ambiguous, obscure, and out of the realm of normal thinking.
Taking all of this into consideration, it might seem easier to just give up and perhaps go read Aristotle. At least that guy just says what he wants to say.
In order to examine Plato’s ethics, we will need to examine his metaphysical and epistemological views. Very simply, Plato’s philosophy of being and of knowledge are intimately linked with his philosophy of living well.

The best example where these three paths intersect can be found within the philosopher’s magnum opus, The Republic. It is near the end of Book VI that Plato, through the voice of Socrates, begins to make his case for the existence of an ultimate source of virtue that shines upon all existence and grants us the ability to live wisely and virtuously.
For Plato, this grand source of all morality is known simply as “The Good.”

And it all begins, rather simply, with a divided line…
“Now take a line which has been cut into two unequal parts, and divide each of them again in the same proportion, and suppose the two main divisions to answer, one to the visible and the other to the intelligible.” -Plato (The Republic)
Plato asks us to imagine a line divided in half. The first half of the line will correspond to the realm of sensible perception, where objects can be perceived using empirical observations.  The second half corresponds to a realm of existence that transcends our physical world and can only be understood through an application of philosophical reasoning. 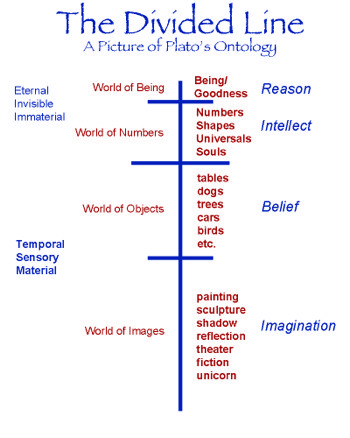 This latter half, which later philosophers (especially Immanuel Kant) would refer to as the phenomenal world, is of great importance to Plato.
Much of the philosopher’s ideas on ethics is dependent upon the existence of this conceptual world.

Plato asks us to again divide the line. Both segments will be halved, giving us four different sections lying on this line. Each segment will refer to a type of knowing, and, as you will soon see, the line progresses; starting with shadows and ending with perfect philosophical understanding.
The first segment on the line represents shadows and illusions that we perceive in our world, reflections that we see off of the surface of a still pond for instance. The second segment represents the objects themselves, the universe as we understand through the use of our senses.
Moving on into the phenomenal world, segment three refers to a type of understanding that we often associate with mathematical reasoning and theoretical understandings. We arrive at this type of understanding when considering ideas such as a perfect triangle or a perfectly straight line. It is important that we do not confuse our conception of a triangle with the physical drawing of a triangle.

Finally we arrive at the last segment on the line, the portion that corresponds to the realm of the forms and, more importantly, the form of The Good.

Very briefly, Plato’s World of Forms is a realm of existence where the perfect conceptions such as beauty, justice, piety, truth, and goodness, exist indivisibly and eternally. It is only by virtue of these forms that our sensible world has any of the qualities that it does.
his means that if something is beautiful, then that object partakes of the form of beauty. If something is just, then that thing partakes of the form of justice.
Plato’s forms are at the center of the philosopher’s metaphysical ideas. That is to say that through the use of the forms, Plato attempted to explain why the universe is the way it is, why things have the qualities that they do.
However, the forms also speak to Plato’s ideas on epistemology. The forms emphasize attaining true understanding through an application of reason and philosophical dialectic. This reflects Plato’s belief that the only way to attain true knowledge is through logic and that our empirical observations are merely shadows.
So we see that Plato’s divided line is actually a hierarchy of sorts. The four segments on the line correspond to four different types of knowing. In numerical order, these types of knowing are opinion, belief (conviction), theoretical knowledge, and absolute understanding.
We ought not to be satisfied with merely living in the observable world, but we should, to the best of our ability, transcend the physical world and endeavor to discover the phenomenal world where we may become aquatinted with the form of The Good and live our life in harmony with this ultimate goodness.
Here we begin to grasp at Plato’s ethics. But what exactly is The Good? Understanding this ultimate form might actually be easier than you think.
If I were to ask you, “Was Hitler good?” what would you say? While you are thinking about that, let’s consider a few other questions. 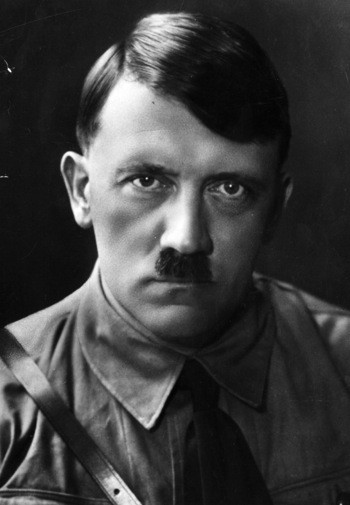 Was Hitler good at instigating a second world war? Yes.

Was Hitler good at creating a propaganda machine? Yes.

Was Hitler a good painter? Maybe.

But back to our original question. Was Hitler good? The answer, rather obviously, is no.
While Hitler was good insofar as he was a dictator or a public speaker, we can say rather confidently that he was not Good.

Whether you consciously recognize it or not, there is a standard for goodness, an understanding of that which partakes of morality and that which does not. This seems self evident. To Plato, this goodness was the form of The Good, and it is the single most important thing we can ever recognize as philosophers.
Plato compares the form of The Good to the radiance of the sun. It is only by virtue of the sun’s light that we are able to gaze upon the world. It is only by virtue of the sun that we are not cast into darkness.
Similarly, The Good is the thing that by virtue of which we have an understanding of other forms such as beauty, justice, and piety. We can not have virtue without having The Good. It is towards this goodness that we must strive if we are to live fully, wisely, and virtuously.
“You would say, would you not, that the sun is not only the author of visibility in all visible things, but of generation and nourishment and growth, though he himself is not generation? In like manner the Good may be said to be not only the author of knowledge to all things known, but of their being and essence, and yet The Good is not essence, but far exceeds essence in dignity and power.” -Plato (The Republic)
So there we have a very brief examination of one of Plato’s most fundamental philosophical contributions. In just one theory, Plato gives us a look into his metaphysical, epistemological, and ethical beliefs. While some might find this feat remarkable, it perhaps should not surprise us that Plato’s philosophies overlapped so much.
Much like his teacher, Socrates, Plato believed that an educated life and a good life were one in the same. We can not live well without living wisely and we can not live wisely without also living well. Pursuing a true understanding of knowledge and being will inevitably lead us closer to the form of The Good and as a result, closer to a fulfilled and satisfying life.
Facebook