by Victoria Papale
The 5th century BC Greece was a time of change. The region was becoming more unified with the development of city states and the new democratic government in Athens was taking hold. Art, as well, evolved, mirroring these progressions. The techniques and imagery of Greek painting began to advance, as the profiled, non-emotional, flat representation of the human was replaced with the expressive frontal and ¾ portraiture. Moreover, depth and perspective came into play.
Realism was now the passion of the Greek artist.
But how were these artists accomplishing this great artistic revolution, and with what materials? Not easily and not with much. See, today’s artists have it made. They only need to purchase their materials at the local arts and craft store and viola! They can begin.
In antiquity, however, painters had to do a lot more. 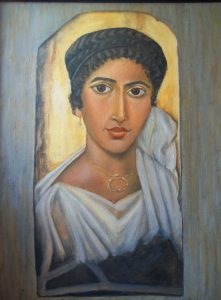 First, they needed to seek out the correct minerals, and grind and heat them to a fine powder. Bee’s wax was then used to mix and adhere the pigments to wood or linen. They practiced a technique called ‘encaustic’, employing wax in a heated state and then working fast before it dried. Encaustic was painted on thin wood and likely treated with distemper or animal glue. Linen was also used for paintings when the wax was in a cool state. This was called the ‘punic’ technique.
Due to limited local minerals, artists worked with an extremely small palette. In fact, Pliny claimed that, ”four colors only were used by the illustrious painters to execute their immortal works”. These pigments are known as the ‘four earth tones’ or tetrachromy in Greek. Namely: white, black, burnt sienna, and yellow ochre.
As mentioned, these lucky four had to be sourced from minerals. In order to produce a brownish red or a red earth hue, for example, they had to burn Ivory or find Hematite. Meanwhile, setting dry dregs of wine on fire created a deep bluish color. Atramentum, a generic term for black, could also be made from burning ivory and dry dregs. This color was also often used as a varnish. Finally, Hydrated Iron Oxide produced yellow ochre and Calcium Sulfate, or chalk, was used for whites.
The beauty of the earth tones was that these colors work in relationship with each other, creating a harmonious and subtle vibrancy to figures and nature.
But let us look at the painters themselves. Indeed there were many from the Classic and Hellenistic periods, but let us begin with Polygnotos of Thasos. 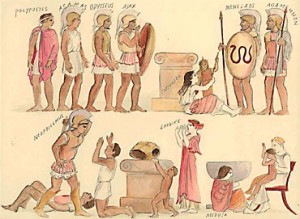 Polygnotus of Thasos (500 BC – 440 BC) was not only the first painter to portray emotion in his portraiture, but also one of the first to make the leap from sculpture to painting. He was noted for his arrangement and distribution of figures, placing them at various points in space which were correct in depth and perspective, as opposed to the horizontal plane artists used before him. And as for his painting, Pausanias, a 2nd century Greek traveller and geographer, states that his large paneled depiction of the sacking of Troy was displayed in the Agora, or Athenian market.
Polygnotus was very admired. In fact, the native of Thasos was adopted by the Athenians and admitted to their citizenship, clearly indicating his fame and approval in the ancient metropolis.
Then there was Apollodorus, known as the “Shadow Painter” or Skiagraphia, active around 480 BC. Some of Apollodorus’ works include “Ajax Struck by Lightning” and “Priest in the art of Devotion”. More importantly is that Apollodorus was an innovator who developed the application of light and shadow. This technique, known as Chiaroscuro – chiaro meaning light and scuro dark, was further developed by future artists, especially Italian Renaissance painters. So the next time you are admiring a Caravaggio or Da Vinci, you can thank Apollordorus!
These artists, with their revolutionary visual introductions, did not come from nowhere. In fact, it is paramount for artists to have great teachers, and so, I am compelled to at least briefly discuss an artist and renowned teacher whose name was Pamphilos. 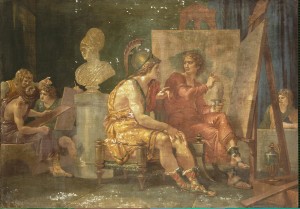 Pamphilos of Macedonia, prominent in 3rd century BC, was an artist, but made his mark in history as the teacher who originated the scientific method, or the use of math to ensure proper proportions. He attended, and later became head of, the Sicyonian Art School, located in the northern Peloponnesus which was founded by Eupompus. Pamphilos’ most famous pupil was none other than Apelles, portrait artist to Alexander the Great.
It is this artist, Apelles, with whom we shall complete our brief overview.
Apelles (352 BC – 308 BC) was an Ionian Greek from the island of Cos. You could say he was the rock star of art in the Hellenistic period. In Pliny’s opinion, Apelles perfected the techniques of realism, symmetry and depth. He was a master of the ‘four color palette’ and, once again according to Pliny, created the recipe for a black varnish, which served to preserve and soften the colors. A number of sayings are connected to Apelles, including “Nulla dies sine linea” … Not a day without a line drawn!
Apelles studied first at Ephesus and later at Sicyion, under the previously mentioned Pamphilos. Apelles went on to become the portrait artist not only to Alexander the Great, but also to his father Philip. Paintings attributed to Apelles included, ‘Aphrodite Rising from the Sea’ and ‘Alexander the Great holding a Thunderbolt’. 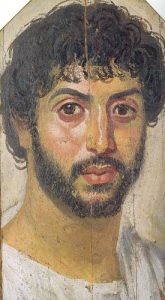 Sadly none of the paintings described here have survived. It is the historians, such as Pliny the Elder and Herodotus, who have given us the detailed information on the artists and their materials, and whom we should thank.
But there is one good piece of news. In the late 19th century two archeologists, Theodor Graf and Flanders Petrie, discovered over 1000 portraits in the Fayum section of the desert, west of Cairo. These paintings were of the four color palette described, used the encaustic method, and were painted from 1st to 3rd century AD.
Amazingly, they were preserved by the arid climate, allowing us to travel back into time and enjoy the art and artists from antiquity… and see for ourselves the artistic revolutions of Ancient Greece and Rome.

—
Victoria Papale is an artist and studied art in Greece in 2007 at the Aegean Center for the Fine Arts in Paros. There she was introduced to the Earth Tones which are now her four colors of expression.