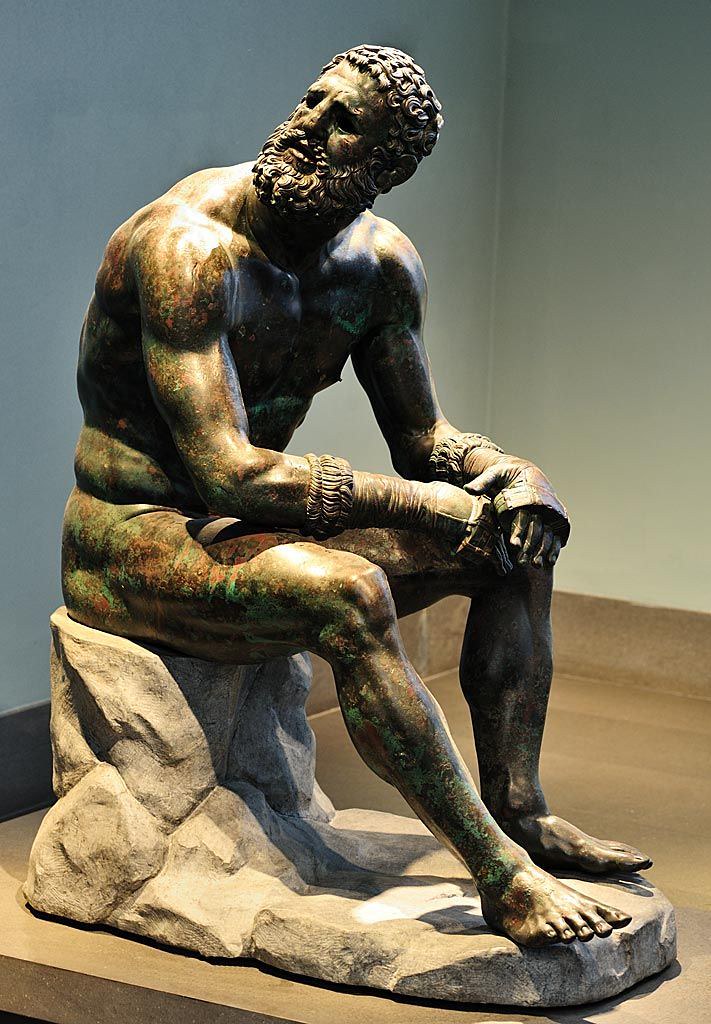 It is easy to have an ‘ideal’ when it is unchallenged. “This king is best”. How readily this bold statement rolls off the tongue, when there is no other king of which to speak. Likewise the phrase, “This God (or Gods) is right” offers no resistance if one’s own knowledge of divinities is severely limited. Similarly, “This is the perfection of beauty” can hold only sway in a small or isolated society. 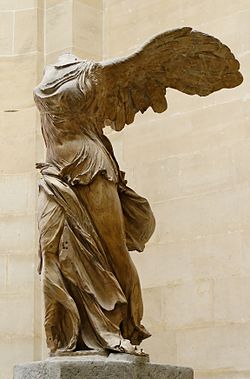 It is often diversity, then, that invites people to examine their own unquestioned convictions in governance, religion or art. The complementary act of decentralisation, takes these norms and expectations away from one ruling group and puts independent thought and creation into a multitude of hands. There are now many competing ideas and concepts.
It is this diversity that characterizes the era of Hellenistic Greek art, the period of eclecticism.
This multeity was born out of the expansion of Alexander the Great’s empire, though its historical barriers aren’t clearly defined. The King of Macedonia brought extreme and remote regions under one vast umbrella. His kingdom, as well as the influencing Greek culture, stretched from Egypt to as far as India.
Within this thriving, expansive network new centers of “greek” art sprung up, questioning the previous dominance of Athens as the cultural epicenter of the ancient world. Now, cities like Alexandria, Antioch, and Pergamum began making a name for themselves in the artistic arena. They took the attic ways, but then added local flare or improved technical abilities. By the 2nd century BC, the rising power of Rome also absorbed much of the Greek tradition, all while supplying their own slant or engineering prowess.
So what did the local artists do to the Athenians’ dominant version of ‘ideal’?
Well, they destroyed it in the most magnificent of ways. 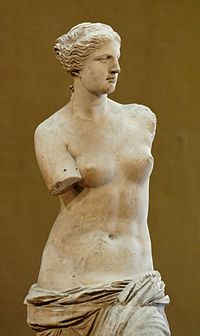 The tall, proud statues found in high classical art were punched, twisted and tortured. They distorted the beautifully sculpted youths of Athens’ golden age into decrepit or dying individuals. Upstanding gods and men were depicted as inebriated, passed out with their legs spread wanton or clutching a bottle.
The artists picked up the old perfect bodies, wrapped gracefully and modestly in sculptured cloths and threw them into the water till they were drenched. The women became erotic, with shapely figures bravely carved through flimsy fabric. They perfected transparency portrayed in stone.
One only has to think of the “Venus de Milo” and the slinky s-like shape of her torso to grasp this new found sensuality. The “Winged Victory of Samothrace”, now atop a dramatic staircase in the Louvre, is breathtaking and triumphant in her clinging cloth.
The Hellenistic sculptures also broke out of their planes, becoming “in-the-round”, or something to be seen from every angle. True to the diversity from which the art was born, subjects reflected a medley of individuals. There were old men and children, africans, sentimental folks and the so called “grotesques”. Emotions, such as agony, kindness or wisdom, were revealed, etched into their faces. 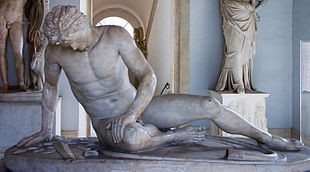 Among the most famous pieces of this time period is the “Dying Gaul“. It portrays a soldier, crippled over in pain. His expressions show his anguish as well as his contorted body. The realism of this piece, which was commissioned some time between 230 BC and 220 BC by Attalus I of Pergamon to celebrate his victory over the Celtic Galatians in Anatolia, is overwhelming.
Another exemplary specimen is “Laocoon and his two sons.” The statue depicts a scene from Virgil’s Aeneid, when a priest tried to warn the Trojans against taking in that wooden horse. The Gods on the Greek side sent a snake to punish the prudent man and his sons, which is what we see in stone. These statues are a conglomeration of twisting nudity and pain. The elderly priest, while in excellent physical shape shows true torment on his face. He is a far cry from the noble Apollonian statues of the Classical period or the Kouros of the Anarchic era. This tormented figure is definitely Hellenistic Greek Art. 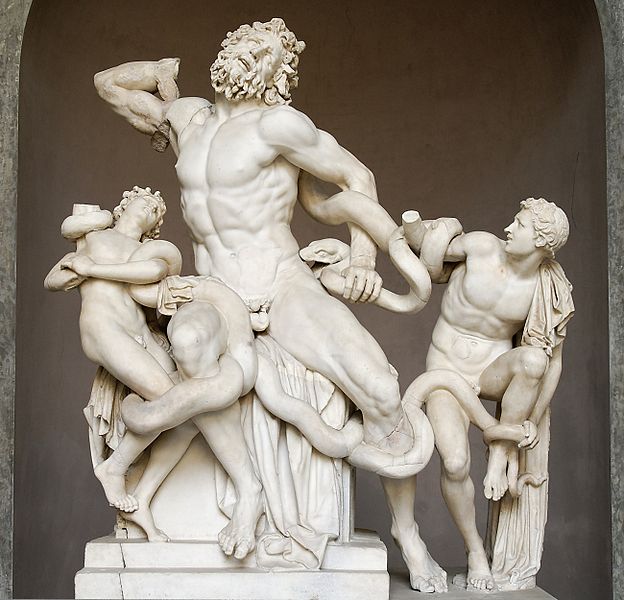 Laocoon and his two soon

Eventually this style and period came to an end. The historians like to mark this moment with the battle of Actium in 31 B.C. It was when Octavian, who later became the emperor Augustus, defeated Marc Antony‘s fleet and, consequently, ended Ptolemaic rule. The Ptolemies were considered the last Hellenistic dynasty to fall to Rome.
It was time for another empire, with its own range of diversity, to take place.
This does not mean, however, that Greek art and its traditions completed disappeared. Indeed, they remained strong during the Roman Imperial period, and especially so during the reigns of the emperors Augustus (r. 27 B.C.–14 A.D.) and Hadrian (r. 117–138 A.D.).
This is a wonderful fact for the modern viewer, as many of the astounding works that exist for us today are not in fact, Greek originals. They are Roman. By improving the materials and support systems, the Latin conquerors helped preserve some of the greatest art of the Ancient Greek world.
Facebook

Posted in Sculpture - No comments